Hyppo Café is “Changing the World, one Pop [and One Cup o’ Joe] at a Time.”

I’m a 2 cup a day, grind my own coffee beans, travel mug in hand, kind of gal. It’s about volume, as much as it is about the caffeine. I’m not sure what made me go with espresso this time around, at The Hyppo Café, in St. Augustine, FL, but it was definitely a treat!

Drinking espresso is an exercise in being “in the moment”, encouraging you to take your time, breathe in the smell of the espresso beans, as they are prepared, and sip slowly. It’s strong stuff, and it makes me think of countries I’ve traveled to, where coffee is a staple – Cuba and Costa Rica, in particular. I drink my standard cup of coffee black, but espresso is another beast all together! I could have added a bit of sugar, but these days I’m working hard not to drink my calories.

Instead, I sweetened it up with an Apple Ginger Cookie, warmed in a toaster oven. I figured this was a much better way to ingest 400 – 600 calories. It was tasty, if you like that sort of thing, spicy and tart. There were 3 cookies in line ahead of me, including a chocolate chip and a festive sprinkle cookie, so the barista waited to make espresso, so I could enjoy it together with the warm cookie, offering to bring it to me at my table.

At the next table over, I listened in on the conversation of a mother and her two college aged daughters, home for the weekend. I couldn’t help it – they were quite animated, swapping stories about first dates and final exams, empty kitchen cupboards and taking the bus to the grocery store. They were regular customers, and were waiting to be joined by the girls’ aunt. The barista brought out a plate with three warm, gooey cookies, which meant mine was next!

When the aunt arrive, about 30 minutes late, she eyed the  meager crumbs that remained on the plate, and headed up to the counter to order one of her own. She was late because she’d driven to the wrong Hyppo location.

The Hyppo seeks to provide customers with authentic and rewarding culinary experiences. We strive to create foods with integrity and environments that balance welcome with whimsy. (Hyppo website)

Hyppo  has numerous locations, including one embedded in the heart of St. Augustine, surrounded by shops, galleries, bars and restaurants, churches and historical buildings, open to tourists.  I was in the area on a Saturday evening, having dinner. I was making my way in the direction of this local popsicle place I’d heard about, but kept getting sidetracked by other things of interest, including architecture, musical Street  performers, and tour guides trying to grab the attention of passing tourists.

After a long day at work conference, and the long evening of wandering, I decided Hyppo would be the perfect reason to make the drive back to St. Augustine, from Jacksonville, the next morning. I might have checked the weather forecast. When I got back to the St. Augustine area, it was a torrential downpour, but that didn’t stop the tourists population on a Sunday morning, in August.

My intention was to grab a popsicle, then head back towards Jacksonville, so I didn’t want to pay for all-day parking. Meters were few and far between, and many of the lots we’re open only to church goers, in the nearby congregations. When I finally found a spot, about half a mile away, I waited for the rain to let up a little bit, opened my rental car door, extended my umbrella, and heard a loud snap.

The top of the umbrella fell sideways, well I continued to hold the handle upright. This was not going to work. I think I just wasn’t meant to have a popsicle in the middle of this high traffic, touristy area.

A quick consultation with Siri let me know of alternate locations, so I headed 4 miles away, to a Hyppo Café. It sat back from the main road, in a small strip of shops. Still without an umbrella, all I had to do was carry across the parking lot, past what looked like a make-shift worship center next-door, and breathe in the smell of coffee as I entered the café. 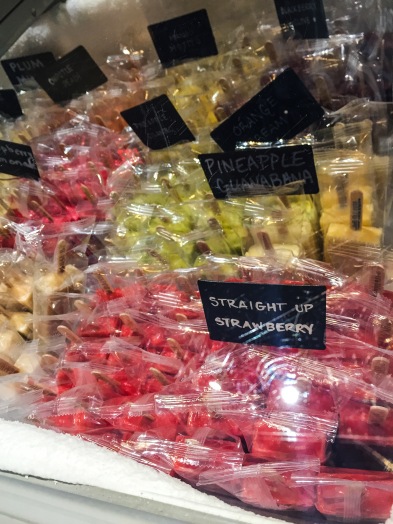 I couldn’t believe the number of popsicle choices in front of me. The gal at the counter told me that their location has the smallest number of Popsicle choices – the smallest! When I asked how people ever decide which to try first, she said that they like to offer suggestions, and guide the customer to a popsicle that would suit their tastes and preferences. I had a hard time making up my mind, so I went with their Strawberry staple, which appears on much of their marketing. 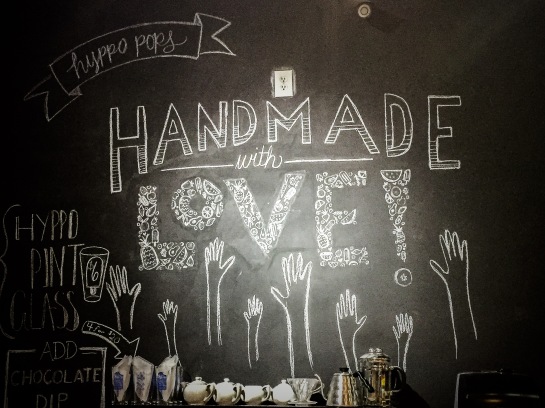 The café also offers a wonderful selection of food items. For lunch I ordered jalapeño corn chowder, which was creamy, and had a pretty good kick. It would take a minute for the soup to arrive at my table, but I left with my strawberry popsicle in hand. After one bite, I knew the popsicle would be gone before the soup arrived, and I was right!

The popsicle was… different…it was not as icy as a typical popsicle, but not as creamy as an ice cream pop, or Creamsicle would be. And it was delicious! With ingredients that include: strawberries… and more strawberries… it was almost as if I was eating a frozen and condensed bushel of fresh strawberries. I suppose I was!

The pops consist of “fresh fresh fruit”, fresh herbs and spices, evaporated cane juice (low process cane sugar), and sometimes dairy. This is a LOT different than what you’ll find in a grocery store Creamsicle, and much tastier. So, where did this popsicle idea come from?

In the early months of 2010 Stephen DiMare was working in Montana for a winter at the Lodge at Big Sky and flew home to St. Augustine for a friend’s wedding. On the flight he pitched his idea for a coffee shop to the (random) nice woman sitting next to him. She told him that what he needed in his coffee shop were ice pops, gourmet ice pops in the Mexican style. Stephen listened as she explained that paletas (Spanish for ice pops) could contain anything from cucumbers to fresh pineapple to jalapeños.

The combination was a success, and the coffee is just as much of a draw as the ice pops!

Unfortunately I was not dressed for the cold temperatures inside the place. The air conditioning appeared to be on full blast, and it was freezing in there. Imagine that! I encountered low temperatures at an establishment known for it’s wide variety of custom, handmade ice pops! Shrug. 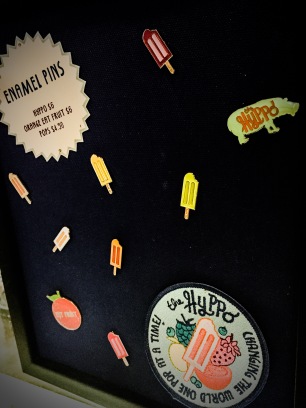 When I had arrived, I’d set up my laptop to do some work. I was there for approximately 2 1/2 hours, but I never felt rushed to leave. There is plenty of space for me to spread out, and I got a chuckle out of the free Wi-Fi, listed as “Soup for President”!

A church group of around 20 college-aged “kids” was meeting at the large gathering table, talking rather philosophically about the intent, and value, behind prayer requests. The group discussion ended, but no one left. Instead, they gathered in clusters of 3 and 4, chatting and laughing together. It was raining, no pouring, outside, and no one seemed in much of a hurry to get out into the elements. A few wandered up to the counter, ordering lunch, and a 2nd round of specialty coffee drinks.

They moved from their communal table to the casual seating area, with magazines spread across a large wooden coffee table, surrounded by brown leather chairs, sunk down and reclining a bit. I think they planned to stay for awhile! The locale would welcome that!