Buzz! I heard the first pesky buzz, which seemed to be in my ear, just a few steps away from the Florida park’s “Welcome to GTM Research Reserve” sign. It silenced quickly, as I felt a slight tickle on my neck. Smack! That was taken care of; I was ready to choose my path and start my hike.

In this moment, as I write, I’m squirming and itching, just thinking about it, imagining little pricks on my elbow, far out of reach in the center of my back, and in my scalp. Every brush of my long hair or shift of my blouse reminds me of Floridian dragonflies, mosquitos, and flies, coming in for a landing. Where’s the bug spray?

I never thought escaping from mosquitos would be part of my Triathlon training, but I would soon resort to that.

The forecast called for rain, just as my conference let out, but as I drove out of Jacksonville, along A1A highway, the sun was overhead and little wispy clouds floated gently overhead. I figured I had enough time to visit the Guana Tolomato Matanzas National Estuarine Research Reserve on my way to the shops and restaurants in historic St. Augustine. First, I’d have to do a little research – what does Estuarine mean, and who is this Guana Tolomato Matanzas that the reserve is named for? (keep reading) 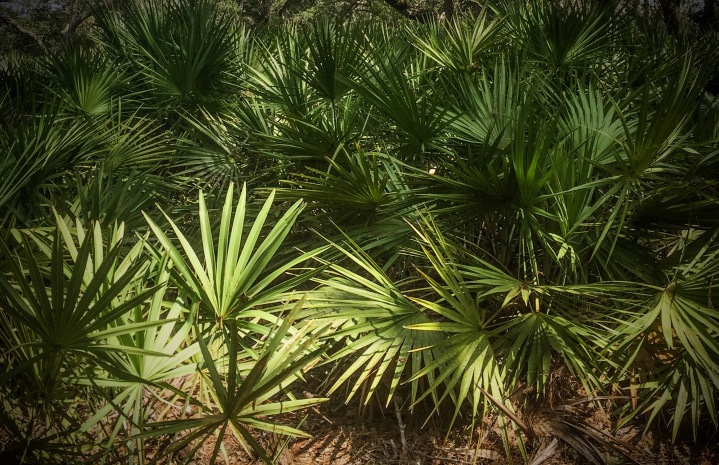 Although I don’t typically finalize all of the details of my travel ahead of time, so that I can fall accidently into a new adventure, I am the type that stops at a park’s visitor center when I arrive. Maps can’t give you all the inside information that you might need, to plan your visit. What I learned at the visitor’s center was that I had a couple of choices for shorter hikes that I could fit in before the rain came.

Option 1: 90% coverage provided by the surrounding trees, preventing the sunburn that I would otherwise suffer, but little variation in terrain

It hadn’t occurred to me that sunblock was a good idea until my rental car was sitting on the hot asphalt of the visitor’s center parking lot. With only one more day to explore the Jacksonville and St. Augustine areas, there wasn’t a lot of time to head back out on the main road, in search for a gas station or drugstore.

Note: This desperate situation is how “they” empty your wallet at amusement parks, ballgames, zoos and arboretums. You’re stuck, and risk giving up valuable relaxation and adventure time, by leaving the premises in search of a value discount mart. The sunblock might set you back as much as the cost of admission, but at least the outside of the tube would be branded with the name of the amusement park, so that you would remember where the 12 oz, $20 souvenir came from.

This sort of trickery was not going on at GTM Reserve; as far as I could see there was no sunblock to be found. So, I chose the 2 mile trail with 90% coverage, and a path that connected to the alternate trail, in case things were going well, and I wanted to see more of the area.

Signs alerted hikers to the dangers of wandering into the woods unprepared. As active as I am, and as fluid as my schedule is, I really ought to keep sunblock in my glove box or center console, along with a hat, a water bottle, a Cliff bar, some tissues, an extra cellphone battery charger, and a first aid kit. And some bug spray, definitely some bug spray – any middle school text on outdoor adventure would advise that.

I did let someone know where I’d be, even before my cellphone coverage became spotty, fell in and out, and then dropped my call, giving out altogether.

Not accustomed to this climate, I was also not accustomed to seeing all of the birds that frequent the area. I have birding friends, so I quickly texted one, with a quick description: “I just saw a very large bird, about the size of a heron, with white wings that were black tipped and long legs sticking out behind him. . . He flew over me. . . and I’m in St. Augustine, FL. . . any ideas what it is? Beautiful bird. . . I wish you were here to tell me what I’m looking at.”

Within minutes, I had a response: it was a Great Egret. My friend explained that she’d used a great app called the Merlin Bird ID app, which comes out of the Cornell Lab, and can help identify 1,100+ species. She highly recommended the app, but I told her I preferred the “Phone-a-Friend” app myself.

All over the area, the dragonflies seemed friendly, and bold. They were large, colorful, and everywhere! The diverse, watery environment is a combination of rivers, and upstream marshes that were dammed to create brackish lake water, which gradually turns into a freshwater reservoir. This landscape draws in an equally diverse collection of birds, bugs and other wildlife. So, this is what an estuary is!

“An estuary is a partially enclosed body of water formed by fresh water from rivers flowing into and mixing with ocean saltwater. Often, the fresh water is prevented from flowing into the open ocean by land masses such as peninsulas, islands, or surrounding salt marshes. This makes estuaries unique environments that sustain a diverse biological community of plants and animals.”  (Restore America’s Estuaries (RAE) website)

This land needs to be protected, and it takes many volunteers to provide park maintenance and educate visitors. The Research Reserve Environmental Center and the Environmental Education Center take on these tasks, and special events help raise funds.

As of this writing, there are 45 Days, 10 hours, 2 minutes and 40 seconds until Estuary Fest 2017, according to the RAE website. In 2016: “More than 19,000 volunteers contributed over 90,000 hours of service to restoring and improving the nation’s estuaries at more than 150 events across the country.” 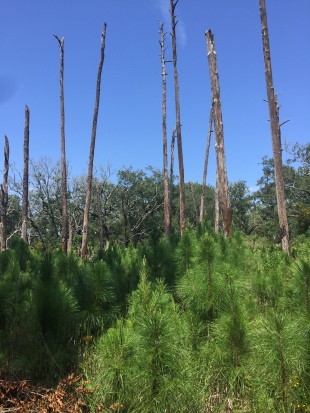 Within the reserve there are 10 miles of trails, on the southern tip of the Guana peninsula, where you can bike, hike, walk your (leashed) dog or ride a horse on these trails. This brings me back to my own hiking experience. Of course I wanted to photograph this beautiful place, and my first opportunity to do so was a location designated by the park as a “Picture Post”. The post had been installed by the park, in a unique, collaborative effort to study climate change. Visitors are asked to help photograph the site, and share online.

There is literally a post, set on the edge of a boardwalk. Visitors place their cell phone or camera on top of the post, facing North, and take a landscape image. They are instructed to move the camera around the outer edge of the post, working their way around an octagon, photographing in all directions. Finally, the collection of images is capped off by taking a photograph straight up, of the sky above the post. Here is my attempt. 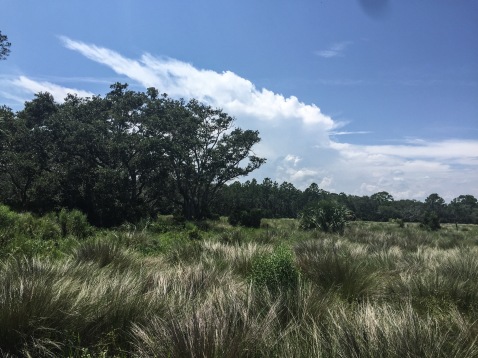 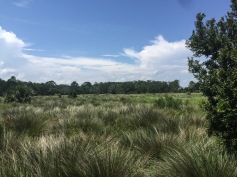 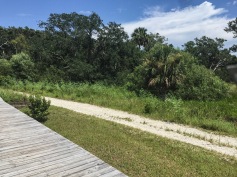 I learned that the state park is named for three rivers in the area, including the Matanzas River, named by Spanish forces for a massacre of several hundred shipwrecked French Huguenots, executed in 1565. Pedro Menendez, who led the massacre, “had been ordered to kill all Protestants he found in the New World. ‘Matanzas’ means ‘killings’ or ‘slaughters’ in Spanish.” (Wikipedia)

About a mile and a half into the forest, I stopped to take photos of the flora and fauna along the trail, in the shade I’d been promised, in the visitor center pamphlet. It was here that the dark and damp terrain revealed itself for what it really was – a breeding ground for hundreds (thousands?) of mosquitos. After just a second or two of being stationary, near the edge of the trail, I felt a sting. Slap!

Then I felt another, and another. Slap! Slap! Looking down at my legs, where I’d just annihilated the pests, I noticed five more swarming around my ankles, and thought I’d better get moving. The light coming through the trees, and onto the leaves of the plants below, was stunning. It was getting later in the day, and the light was softly filtered by the trees above. It was nearing the golden hour – ouch! Slap! Swat! Slap! 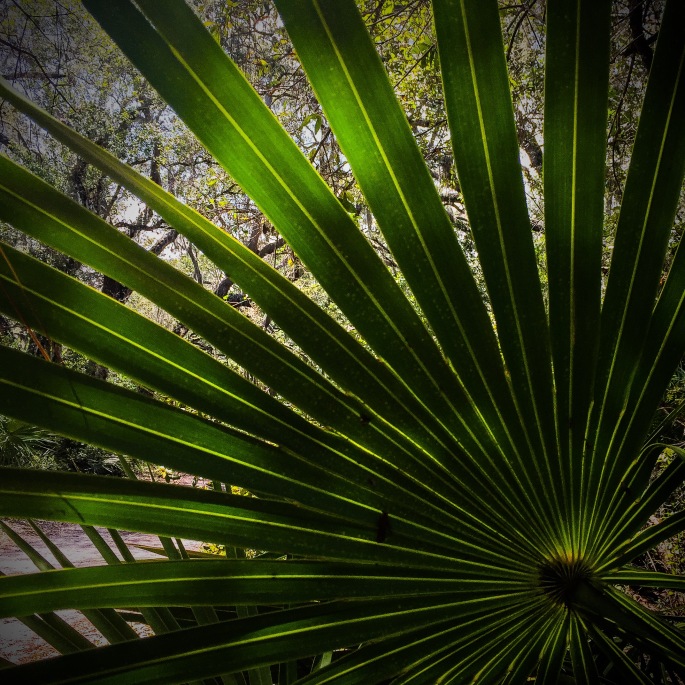 The signs had warned me to bring bug spray. . . . and I’ll be sure it’s a staple in my travel kit going forward, at least when I’m headed down to Florida! In the moment, however, all I could do was keep walking, or start jogging. The buggers were fast, so my jog bordered something resembling a run. I had my running shoes on, the ground was soft, and the path was well maintained. I decided it was time for a bit of a training run!

With sunblock and bug spray at hand, I would have spent hours in the forest exploring the trails, breathing in the scents of nature, listening to the wind, and gazing out at the watery landscape. Without such provisions, it was soon time to head to the car, and back to civilization and cell phone coverage. I made it to the parking lot just in time, and the rain came pouring down, with ominous skies rolling in.

“This is your reserve! Enjoy, share, and protect it.” (Guana Tolomato Matanzas)