“We Don’t Talk About it, Unless Someone Asks”: Adventures in the Sandia Mountains, at 10,000 Feet

“We don’t talk about it, unless someone asks,” our tour guide explained. “The families still live in the area.”

Our tram, one of two operating as part of the Sandia Peak Tramway, was headed to the top of the Sandia Mountains, more than 10,000 feet above sea level, just before sunset.

“If you aren’t sure whether you are afraid of heights, you’re about to find out,” he’d cautioned us, as the tram bumped and swayed, crossing over the ridge line. We found ourselves suspended over a deep canyon; more than one passenger gasped at the beauty of the sight. Down below, a tiny flash of white appeared, something manmade, resembling the wing of an airplane.

“What’s that, down there . . .? It looks like an airplane wing,” one observant passenger asked.

Far below the tram, what he saw (and captured on camera) was the wing of TWA Flight 260. Other debris was scattered among the trees. Pine needles partially obscured the view. The Aspens were starting to turn vibrant shades of yellow, here and there, or had lost their leaves all together. It was late October in New Mexico, and the story of a plane crash began to unfold.

Not much detail was given out by the tour guide – this was out of respect for the 16 people who died in the 1955 crash, and family members who might be visiting the area, in remembrance or for recreation.

The plane was headed to Santa Fe, NM from Albuquerque. “Its deviation from the normal flight path, initially believed to be the result of pilot error, was revised to “unknown” given that the contribution of other factors could not be definitively ruled out.” (Wikipedia)

Initial reports speculated that the pilots may have intentionally flown the plane into the mountain, but mechanical and navigational errors may have just as likely contributed to the tragedy.

“It was last seen in a high-speed shallow climb toward the cloud-shrouded Sandia Crest at an estimated altitude of 3,000 feet above ground level. . . at 7:13 [am] the flight crashed into Sandia Mountain killing all 13 passengers and three crew members on board instantly.” (Wikipedia)

Volunteers, familiar with the area, and comfortable navigating the challenging terrain, came together to assist in the recue efforts. The cause is still obscured by unknown factors. A similar group of volunteers continues to support modern-day rescue efforts in the mountains. 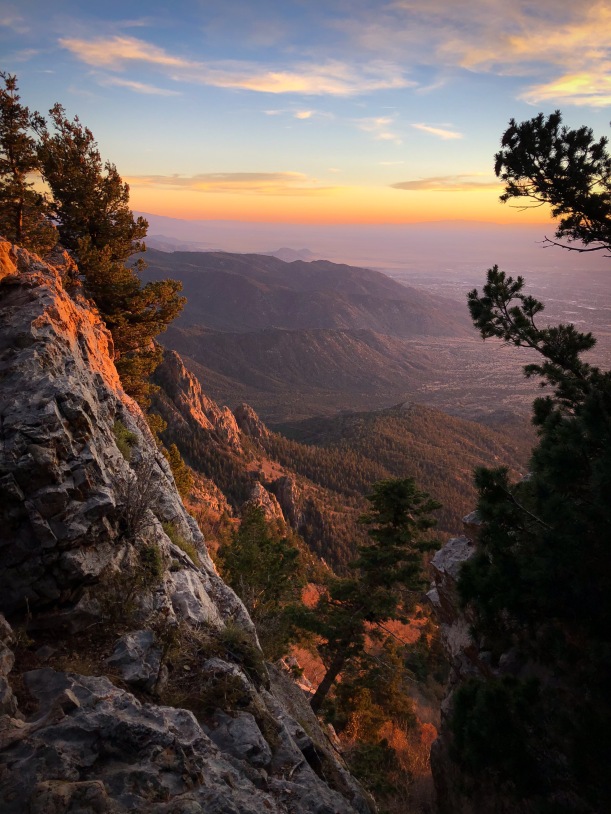 Serving the community and helping others, volunteers with backgrounds in medicine, science, engineering, law, teaching, and small business ownership come together to assist local authorities in the face of the many dangers that the terrain and climate can present, including winter / avalanche rescue, search and backcountry medical care.

The land surrounding the mountains is flat and stretches far and wide in all directions. You see the rocky peak of a mountain in the distance and are startled to learn that it is 150 miles away and stands 13,000 feet above sea level. 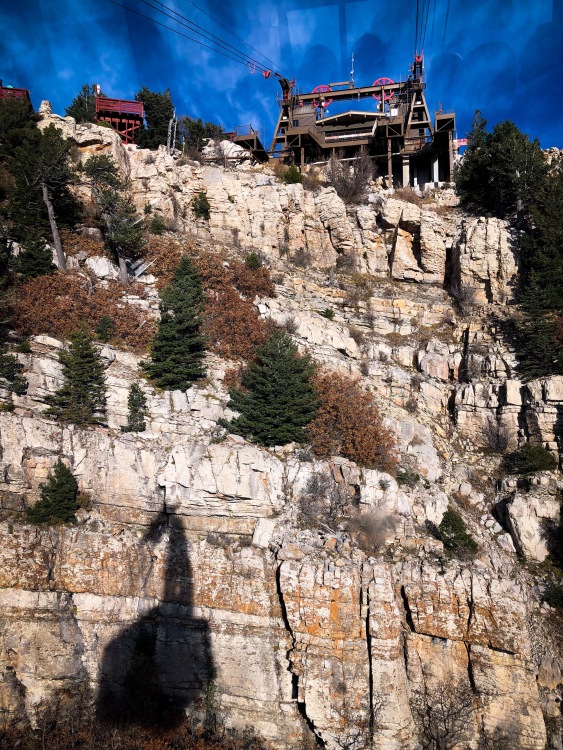 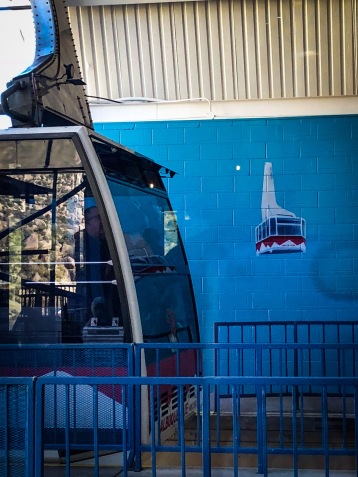 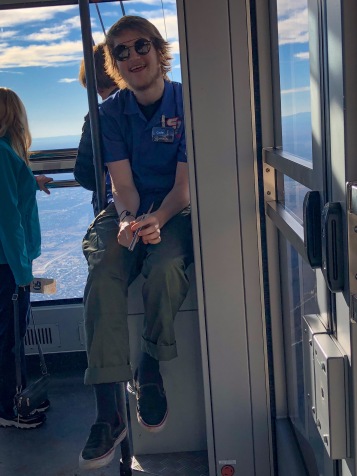 Back on the Sandia Peak Tramway the tram glides to a stop, passengers disembark, and there are trails to explore. The Kiwanis Cabin trail is recommended; it’s about a mile and a half away, easily hiked with time to get back to the tram for a planned sunset picnic.

Except the air is thin. Breathing is a challenge. Muscles don’t get the oxygen they are accustomed to. Hikers strain to climb up a path interrupted by jutting rocks, protruding tree roots, and an occasional patch of snow. The guidebooks and websites list the trail as Moderate Difficulty.

Small sections of the trail are soft with dirt and fallen pine needles, releasing the fragrance of a car air freshener. Hikers’ knees are thankful for the relief from the surrounding, rocky surface.

You breathe in slowly. Your muscles recover, as you rest, leaning against the peeling bark of a tree. You wish there were an easy way to bring your Metro Parks hiking stick along on your Southwest flights, without having it count as one of your 2 free carry-ons. But the hike is short, and you are (relatively) young and able.

Up at the top of the trail there’s an 18-month-old Pitbull pup and his family, enjoying the view. Dogs are not allowed on the tram, and at the base of the tramway there are large crates for these furry family members to relax in, while the humans set off on their adventure.

Alternatively, there’s a parking lot about half a mile from this vista point, with easy access, so that everyone can enjoy the view – a lot more fun for the canine, but the humans do miss out on the view from the tram.

It would be a beautiful sight to watch the sun go down from the Kiwanis Cabin. Constructed in 1936 by the Civilian Conservation Corp, the rustic limestone structure was built upon the request of the Kiwanis Club, to replace one that had burnt to the ground. Today it offers some shelter from inclement weather. 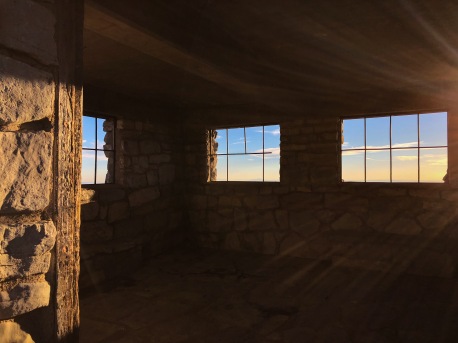 Navigating the rocky terrain at twilight could easily invite a broken ankle, so you get on your way, hiking back through the trees that line the mountain ridge. You see the sky turning orange, to your right, and make several trips out to the cliff’s edge, to soak up the rapidly cooling evening light. Your camera records the scene as best as it can.

There’s no sense that you “missed sunset,” due to some failure to make it back to the tram station, where everyone else is watching the sun go down. Instead, you are treated to your own sunset. You witness the sun sinking down against varied backdrops, trees appearing in silhouette, warm light bouncing off of rocky mountainsides. 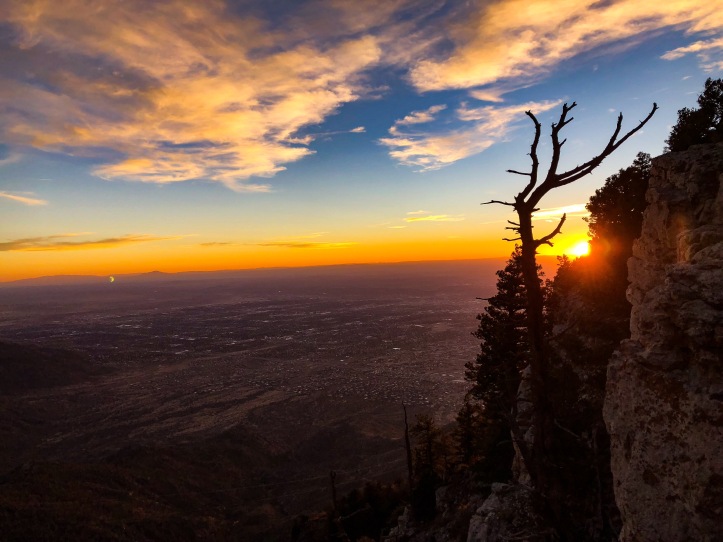 Temperatures drop with the sun, and the wind picks up. You find a bench on the North side of the tram station, sheltered from the wind, to eat your picnic of crusty rosemary bread, goats milk cheese, sweet fruit and savory cashews. You’ve already learned what happens when you open a bottle of sparkling water at 10,000 feet. But it’s just water! You’ll dry off.

It’s a fun and silly ride, back down the mountain, packed tightly into the tram with kids still excited by the adventures of the day. There are Ooohs and Ahhh when the lights of the tram turn off. The mountain goes dark. The city of Albuquerque, down below, is decorated with street and window lights that twinkle in the distance.

No one is thinking about the plane that crashed into these mountains, back in 1955, except perhaps those who pointed it out on the ride up. It’s likely that most of the tours went on without mention of it, though the tour guides will speak about it, if asked. There’s a lot of history in these mountains, and a book about the investigation, in the tramway gift shop. 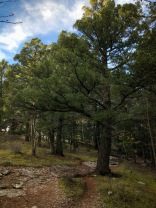 The last tram leaves at 8 pm, but there’s a staff member at the top of the mountain overnight, as a safety precaution. We wonder aloud how they pass their time, over long winter nights. We wonder what adventures they have been on, and what wild sights they have seen.