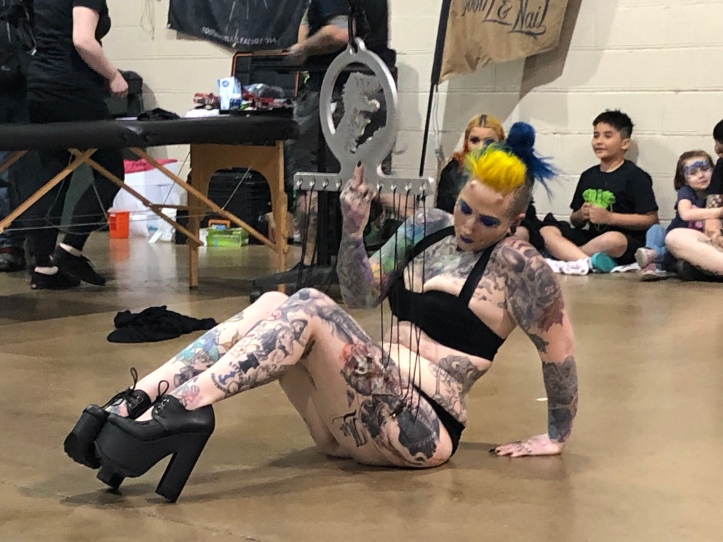 Perched on the tall, awkward stool in the front window, surrounded by pink fuzzy keychains and oversized silver hoop earrings, I didn’t know what piercology was, but I did know that a sharp piece of cold metal was about to be thrust into my flesh, emerging bloody, on the other side of my delicate 12-year old earlobe.

I don’t remember there being choices of where on my body I wanted the piercing. At the center of the mall, not far from Auntie Anne’s Pretzels, Claire’s had very few options, for placement, size, shape, thickness, or the material of the stud that was loaded into the piercing gun.

With 100% certainty I can say that I never considered having a curved 3-inch hook pushed through layers of skin and fat, from the back of my thigh, towards the front, having a carbineer attached to it, and suspending myself from the ceiling by thin ropes, to be swung around like a trapeze artist, to the gasps and applause of an astonished audience. 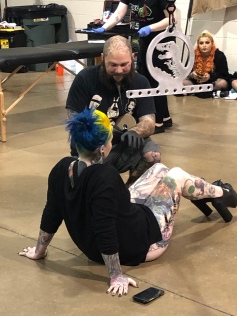 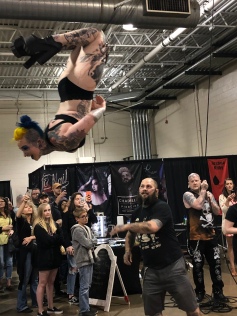 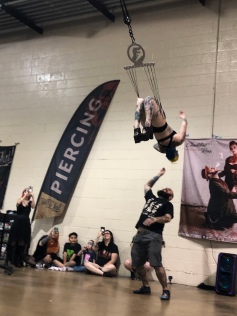 The colorfully inked woman in front of me, a willing participant, was a pin-up girl; there were glossy prints showcasing her tattoos and piercings, available for purchase on a table nearby. She was a performer, a model, an entertainer, actor, character and daredevil. She was intense. She was braver, or crazier (or both), than I’d ever be.

At the Columbus Oddities & Curiosities Expo I saw a lot of things that are not a part of my typical day-to-day existence: two-headed calves, Ouija boards, crazed dolls and clowns, pickled specimens in cloudy jars, leather bondage paraphernalia, and the Ripley’s Believe It or Not gigantic, record-breaking, and still growing, hairball.

There were a lot of Garbage Pail Kids collectibles too – odd, indeed. 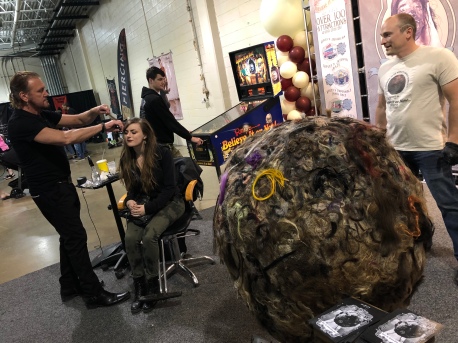 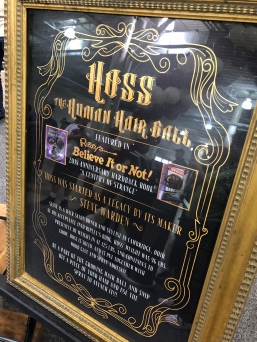 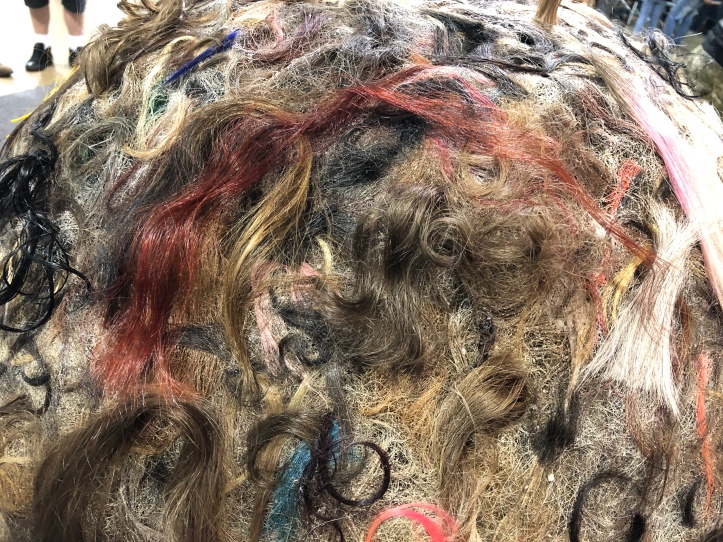 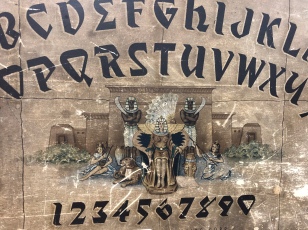 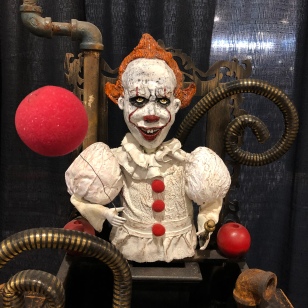 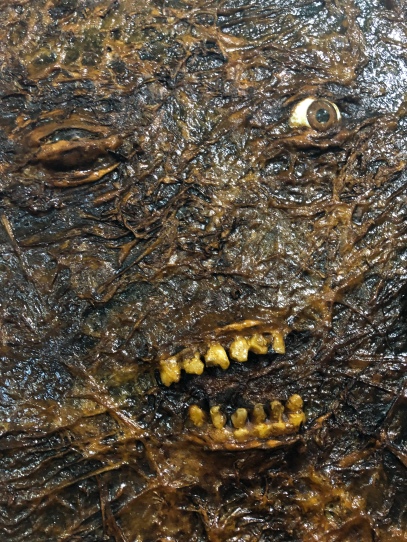 Puzzled by the whole spectacle in front of me, I couldn’t stop wondering why the performer kept her cell phone by her side, throughout the piercing of her skin, the attaching of the remaining hardware, and the tying of the ropes. It seemed bizarre, and out of place, to think that she might be checking out what other people were doing, on Facebook or Instagram.

Could she be experiencing FOMO, wondering what exciting places her friends were exploring? What could be more riveting than what was being done here, to her body? I supposed she might be checking in, publicizing her performance, tweeting the play-by-play, or inviting her followers to come see her that afternoon. But she was so nonchalant about the whole thing. 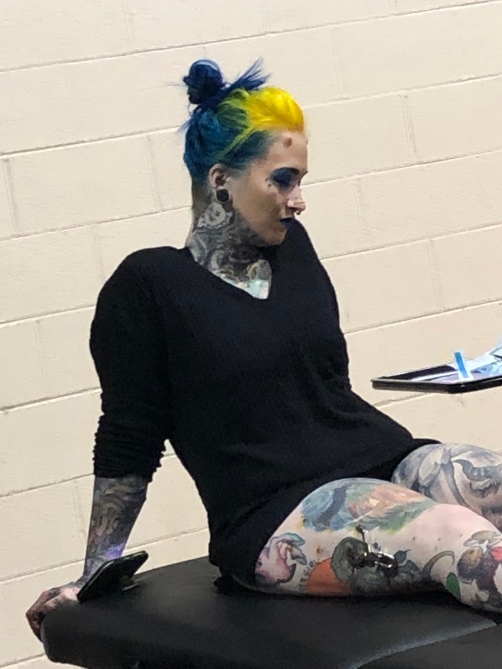 Heavy metal music blasted that corner of the building, which had drawn my attention, just inside the entrance to the Expo. The music was heavy and dark, but also exciting, building in intensity. It was only moments before the acrobatics began that I realized the lyrics were tied to Flying, or Soaring, or maybe it was something about Freedom. It was definitely tied to the performance, which I realized had been going on for some time, drawn out by all of the necessary preparations and safety precautions.

Sterile metal jewelry (if it’s right to call it that) was inserted by expert hands. Manda Rexx, the star performer, was under the trusted care and the steady hands of her husband, Chadillac Rexx. Body modification, including implants, scarring, tattoo and piercing are among his talents, and his newlywed wife has indulged in all of it. 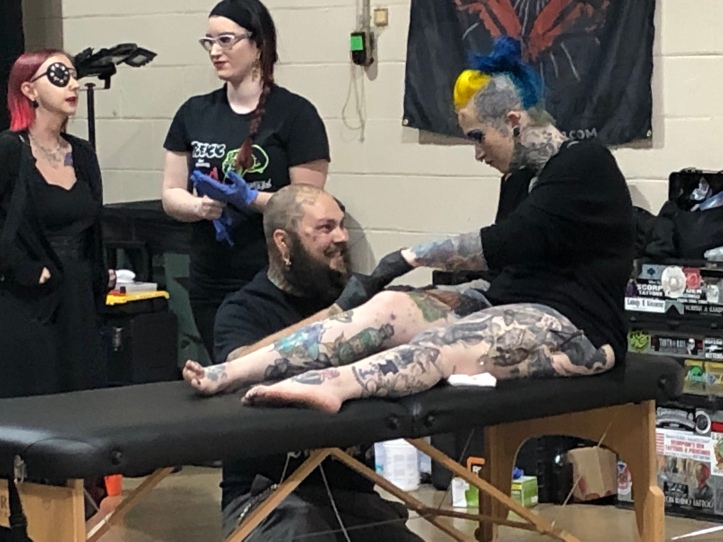 I watched the performer’s hands flick across her cell phone screen, heard the music change, and realized that she’d been controlling the soundtrack. What better person to set the mood, to use the music to zone out. . .or zone in. . . ? It was time to be lifted into the air, suspended only by the 6 large hooks in her tattooed thighs. An assistant wiped away streaks of blood, and she was hoisted by her trusted rope handler.

The whole group was covered in ink, from scalp to sole, with no inhibitions about being seen. They weren’t worried about covering up their tattoos, or getting a corporate job that would frown on their “decorations.” They were doing work that thrilled them!

Tattoos and Piercings often go together. On some bodies the one seems to be in a sort of twisted competition, aimed at outnumber the other. Could one run out of places to pierce? What happens when every inch of skin is painted in the permanent ink of the tattoo artist? 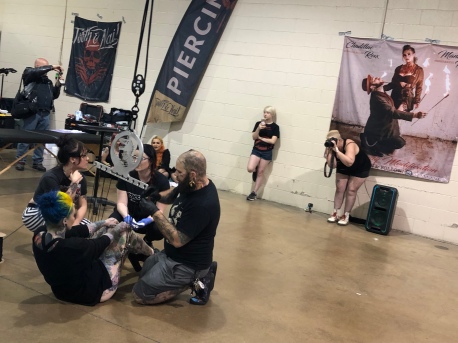 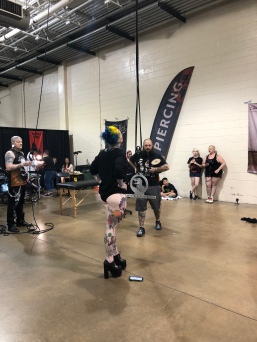 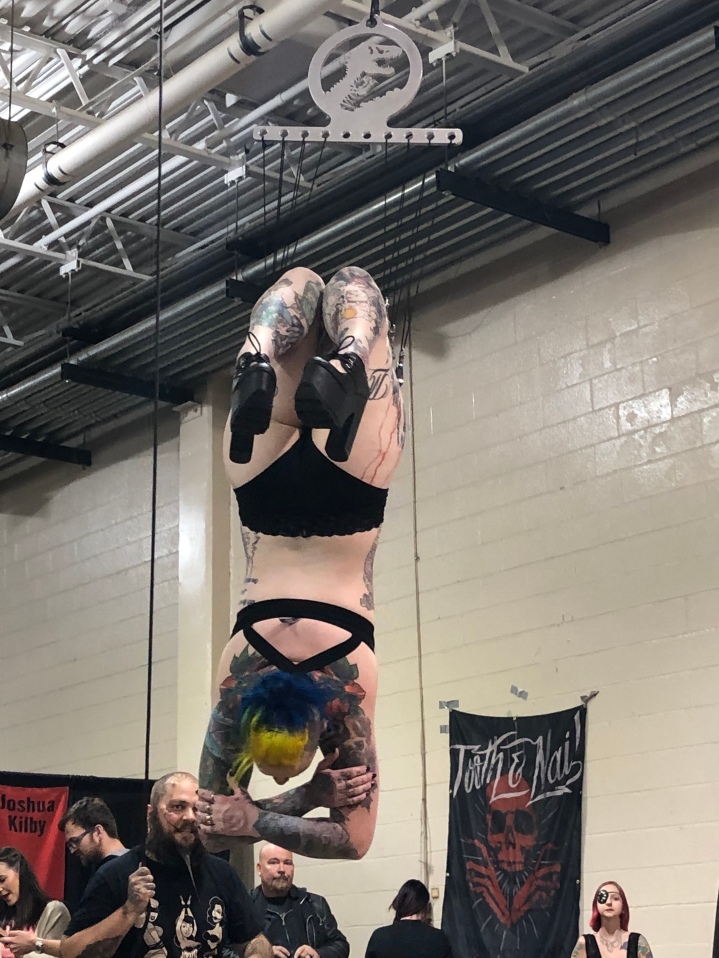 In my early 20s, during my college days when I got my first tattoo, I was told – “One is classy; two is trashy.” I didn’t heed the warning. Go big or go home, I thought, when the tattoo artist previewed how much real estate the tattoo across my narrow shoulders would take up. It as just what I wanted!

On the ride home, after 7 hours of  stinging  needles, design challenges, and tests of pain tolerance, I called my family. Remind me, if ever I speak of getting another tattoo, of how much this hurt, of how long it took, and how the tattoo artist was keeping a close eye on me. Just minutes in I’d begun sweating suddenly, and all over. It was a sign that I just might be about to pass out cold.

Almost 10 years later I’m beginning to think I’m ready for my next tattoo. I have the design picked out. I’ve set a goal for myself, and if I reach it I may have to go through with my pledge to myself, and get the tattoo. I’ve forgotten the pain – almost.

Watching the performance at the Expo was a not-so-gentle reminder of the pain we sometimes willingly put ourselves through.  I can say that I still do not have thoughts of suspending myself by metal hooks, sunk into my flesh, no matter how entertaining some might find it. My second ear piercing took months and months to heal, and I swore off future piercings, more resolutely than I’d committed to not getting another tattoo. 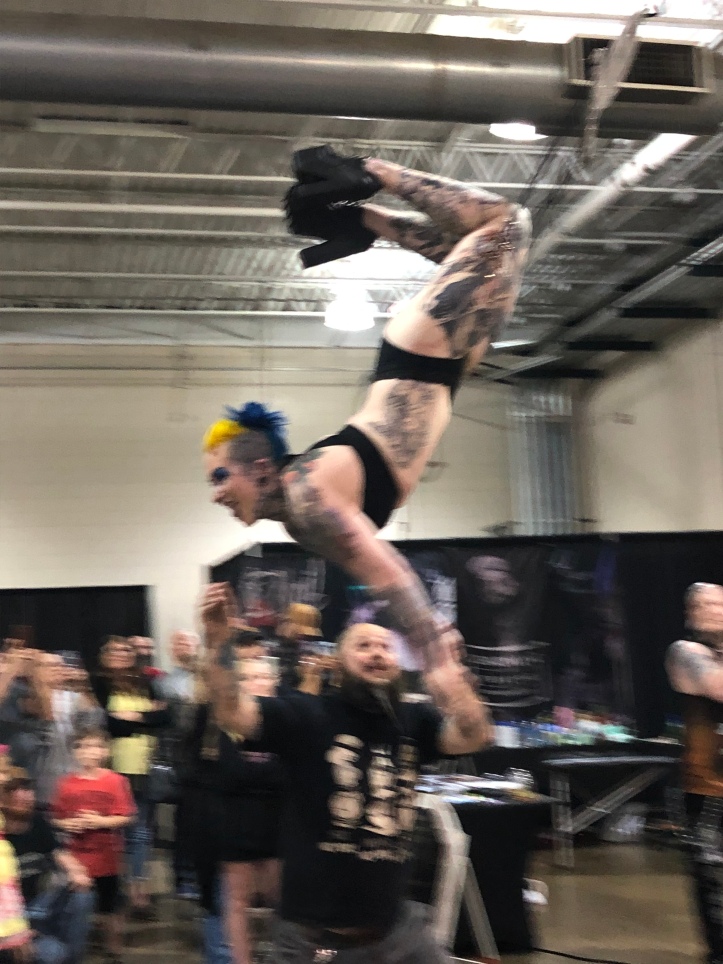 The intensity of the performance at the Oddities & Curiosities Expo left a lasting impression. Twice now I’ve snooped around Manda and Chadillac Rexx’s social media, only to be sucked in, staring wide eyed, unable to look away.

I was supposed to wait until I was 14 for my first piercing, but I talked my way into having it done at 12, when my 14-year old sister went to the mall to have her ears pierced. That was unfair, I know! But I was 12. . . I didn’t care!

My parents signed off on the procedure; my sister who had to wait those two extra years, wasn’t pleased. She’s quick to recall the hurtfulness of that slight.

I can’t help but wonder when my young niece will ask for her first piercing. . . or sneak away to get her first tattoo, without parental consent. . . or dye her hair pink, letting it hang down in dreadlocks, taking after the edgy rock musician she was named after. (Do a Google search for “Dilana”, and you’ll see what I mean.)

I hope she stays away from the hooks. . . I can’t begin to imagine the pain. 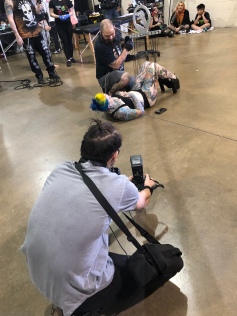 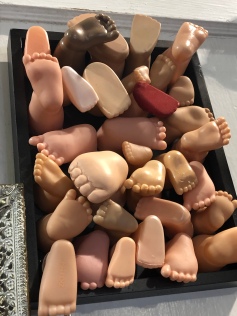 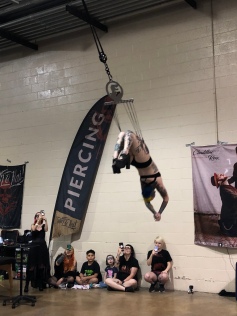 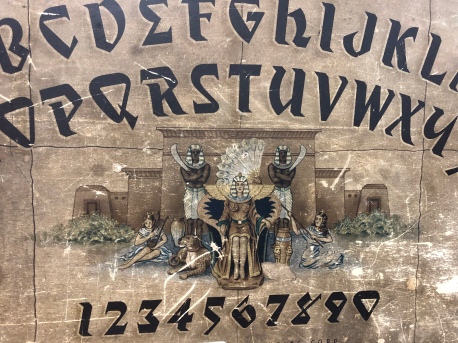 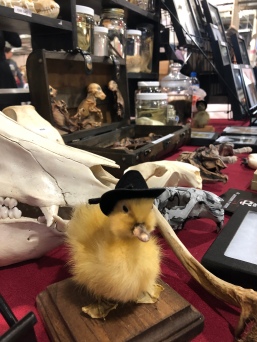 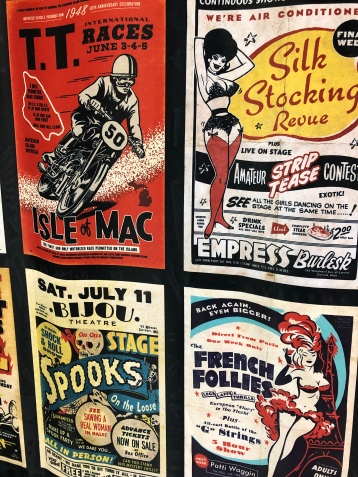 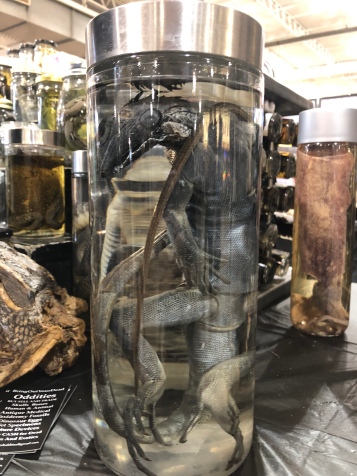 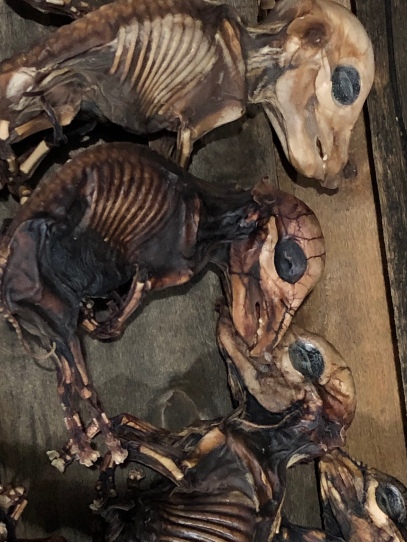 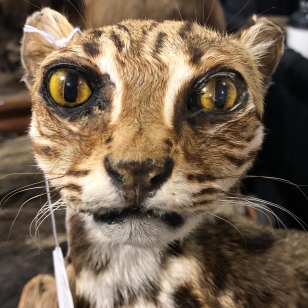 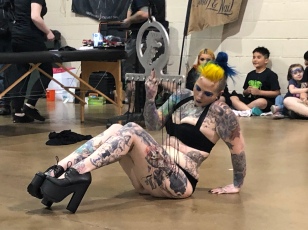 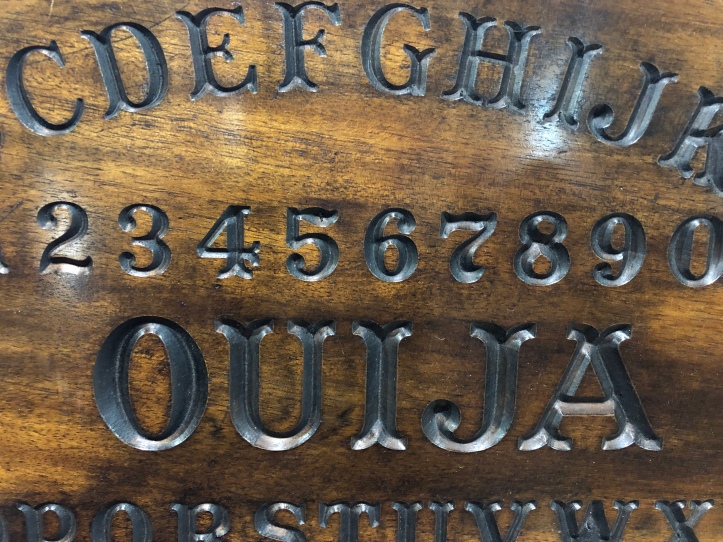 Ripley’s Believe It or Not: https://www.ripleys.com/