Embrace Your Tiki: Polynesian Culture Through the Eyes of Americans Seeking Escape

It’s lush, exotic and mysterious, another world. The allure is palpable. After World War II, having been exposed to the lifestyle and the beauty of the South Pacific, soldiers returned home, bringing with them a version of the culture they had been exposed to overseas.

The Polynesian lifestyle is full of ritual, mythology and fantastic storytelling. In 1950s pop culture, this mysterious “other” world came to life as Tiki, and its hula girls, Hawaiian shirts and tropical drinks.

“For some, Tiki represents one of the great lapses of common sense and good taste in recent history. For others, it stands as a noble attempt by modern man to recreate paradise in his own back yard.” (Tiki Culture / Exotica Documentary – “The Air Conditioned Eden”)

When was your last backyard Tiki party and Luau?

In 1947 James Michener wrote the book Tales of the South Pacific, which became a Broadway Musical, and then the Movie South Pacific. The author speaks about the attraction of this part of the world, saying of the soldiers: “Why go home to Oklahoma and West Virginia, when you could stay in Bora Bora? They weren’t dumb. . .” (Tiki Culture)

The film South Pacific is sexually charged from the start, with lonely soldiers gathered on the beach, chanting “What ain’t we got? We ain’t got dames!” It was a time of sexual liberation, and even Hugh Hefner took part in the Tiki world, with a Playboy party on Playboy After Dark in 1960. The festive and upbeat music, the brightly colored attire (or lack thereof), and the cocktail culture all came to life on screen.

Consider the escapism of Tiki culture, the release and relaxation of the Tiki lifestyle, as it is brought to life in the American 1950s. It was full of fun and adventure, the exotic and the strange, blown in by the Trade Winds. In 1947 Thor Heyerdahl had studied the theory of Polynesian migration first hand, on a balsawood raft, Kon Tiki.

“He saw parallels in the physical appearances, rituals and myths of Polynesians and South Americans, and around the glow of a fire, he listened as an elder spoke of a demigod named Tiki who brought his ancestors to the island from a big country beyond the eastern horizon.” (History Channel)

Following along with Heyerdahl’s journey, America was officially swept up in the adventure. Tiki culture, as we now know it, wasn’t far behind.

Today, a Tiki restaurant is dining as entertainment; it’s escapism and indulgence in fantasy. It’s Disney’s Polynesian Hotel and the Enchanted Tiki Room attraction. That means palm trees and grass skirts, in 1963, created around the American perception of Polynesian culture, complete with singing toucans. Although the Tiki Room has been around for decades, Disney continues to “bank” on of this exotic way of life, even now, with the 2016 release of Moana, starring Dwayne “The Rock” Johnson. 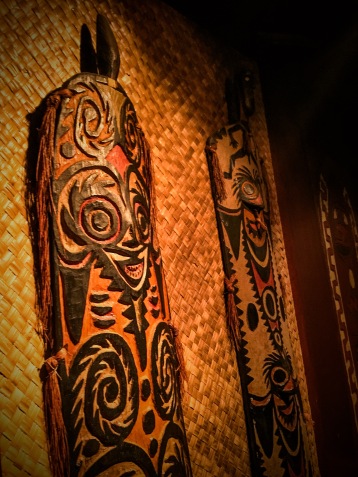 It’s not just the U.S. that became obsessed with this vibrant culture. Mai-Tais, Toques & Tikis is a documentary that follows a Canadian couple in the process of turning their garage into their very own Tiki bar. It’s an escape to a tropical place that is carefree, and full of rich flavor. Whether it’s elaborate backyard pool parties, relaxing with a cocktail after a long day at work, or just a mini-escape, the Tiki bar lets you put the real world behind, and disappear into another world for a while.

I have recently had several opportunities to indulge in Tiki culture.

On a work trip to Atlanta, GA, it was early evening, and the prices for dinner at the famous Trader Vic’s were a bit more than the company per deim would cover. We figured there’s nothing wrong with stopping in on our own dime, for a Mai Tai, to start the evening off right. Trader Vic’s offers the chance to “Escape to the Islands. Taste the world.” As a visiting tourist, you can stock your own bar with merchandise from Trader Vic’s, including vintage rum label coasters, a stylish bar mat and branded cocktail glasses.

The establishment’s website declares: “Cross the threshold into Trader Vic’s and be instantly transported to the islands. Trader Vic’s Worldwide has a full-time team of Anthropology experts who scour the globe to collect hand-crafted and authentic pieces for each of our restaurants. The fascinating artifacts collected from islands around the world help create a unique experience in each of our locations.”

Hand-carved Tikis and palm-thatched ceilings great visitors. The restaurant is located on the lower level of the Hilton Atlanta, and is a big draw for those attending conferences at surrounding hotels. After a few drinks, and a couple of hours watching plates of food being carried to other tables, we decided it was a good idea to put something in our stomachs. Cooked on Chinese Wood-fired ovens, the food takes on a smoky flavor. But really, we were there for the drinks! 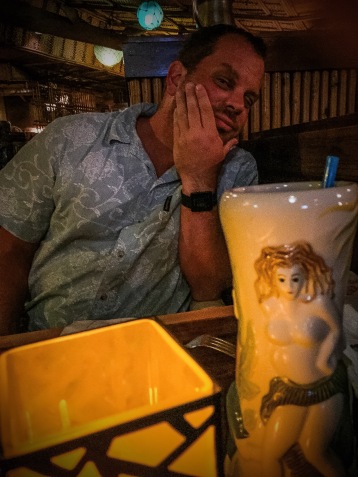 Trader Vic’s represents the reinvention of the cocktail, in true Tiki form. The signature glasses that the cocktails are served in are up for grabs! Well. . . I don’t mean you should stuff a glass into your oversized purse, or try to conceal it under your coat, after you’ve polished off your 3rd (very potent) drink. Trust me, the bar staff is keeping a watchful eye!! What I mean is that they would happily take your money, for a souvenir glass to take home – a seahorse, headhunter or rum barrel, or perhaps a pineapple or coconut glass.

On the Trader Vic’s webpage you can buy a tote bag, cell phone case, keychain or polo shirt. Books on mixology, general bartending, and how to throw a Trader Vic Tiki Party are available, as are sunglasses, watches and cufflinks. Oceanic art has its own section – 1934 vintage posters, masks made from painted coconuts and mini Tiki statues. 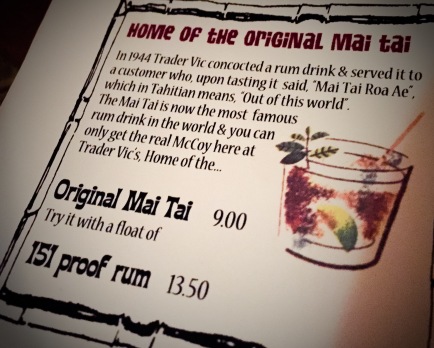 Trader Vic’s has made itself at home in London, Tokyo, Munich, and Abu Dhabi. Perhaps I have a bit more traveling to do, to sample all the cocktails! Thailand, Jordan and Saudi Arabia offer locations to try out a Dark n’ Stormy (made with ginger beer) or the classic Mai Tai. Although there is debate over the true origins of the Mai Tai, Trader Vic’s claims to have created the drink. So does Don the Beachcomber, a rival of Trader Vic’s.

For now, I can get my Tiki fix right at home, in downtown Columbus, OH. Grass Skirt Tiki Room calls itself a downtown oasis. It offers Tiki Tuesday – from 3 – 7 pm, with all Tiki classics just $5. The patio is open during the warmer months, then cuts back to winter hours, keeping everyone feeling tropical inside.

I made my way there to celebrate the birthday of someone who is rather more popular than he may have realized, and quite well loved. A casual, last minute call to friends, just to gather and drink a celebratory Mai Tai or two, attracted almost 25 friends, and friends of friends. Grass Skirt is a bit small – and we were easily taking up a 3rd of the bar and surrounding tables.

The restaurant’s website cautions: “Due to our small size and the casual nature of our establishment, we cannot take reservations. However, if you are bringing a party of more than 6, we do very much appreciate a heads up (and we can try to get organized for you).”

I had an inkling that this might be a good idea. The staff was ready for us – they were exceptionally accommodating, and kept the drinks flowing. The food was delicious! The Spam Fries seemed to be a hit, as evidenced by there being nothing left on the plate.

Tables were pulled together for the early arrivals. As more friends arrived we spread out to small round wooden tables, scattered through the restaurant, with benches that could seat two, if you were okay with getting cozy. The remainder of our group had a front row seat at the bar, where they could witness the elaborate, colorfully decorated cocktails being constructed. Alternatively, they could order from the large selection of rums, neat or on the rocks. 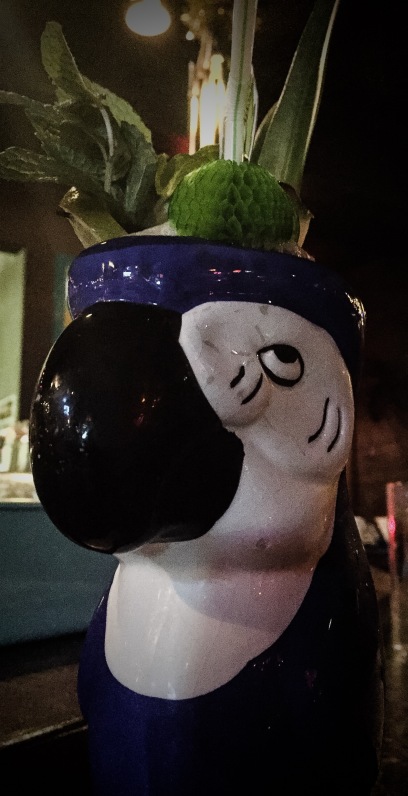 With skull and crossbones to indicate the strength of the cocktails, and several pages of the menu dedicated to drinks, it would take a while to work your way through the list. Despite being downtown, the bar is very accessible, with plenty of area parking for cars and for bikes. A friend who lives nearby rides over from his apartment, and is working his way through the rum list, expanding his expertise along the way.

The menu indicates that the Zombie (3 Skulls) follows the recipe of Don the Beachcomber, Huntington Beach, California, circa 1934 – “Zombie 12 – Brugal Anejo, Cruzan 151, lime, grapefruit, cinnamon syrup, Pernod, Angostura bitters. Return of the Zombie Bride (3 Skulls) carries a warning – “CAUTION – Too many of these high-octane concoctions is a dark & stormy tale indeed! We reserve the right to limit to one per customer.” (Restaurant menu)

Grass Skirt is the modern day version of bars and restaurants that, at one time, were just about everywhere. . . at least in the Midwest. Grass Skirt lives in the shadow of the Kahiki Supper Club,  the largest Polynesian restaurant in the continental united states. Once on the National Register of Historic Places, the restaurant, with three bars and a capacity to seat 500, is now gone, having been demolished after closing in 2000. (Ohio History Connection)

A quick stop at The Book Loft, in Columbus’s German Village neighborhood, reveals a continued interested in the Tiki Culture, and the history of the Kahiki. There’s just something about this culture, something inviting!

When Tiki culture, and the mysteries surrounding the demigods associated with Tiki, made it onto the Brady Bunch. . . well,  I believe something solidified. This was a true sign of assimilation into pop culture! Let’s just say that the show’s Hawaii episode left a strong impression. If you haven’t see it, there’s a link below. You must be just a little too old, or too young, or perhaps you don’t own a TV.

If you are wholly unfamiliar with the Brady Bunch, then take advantage of the World Wide Web, to acquaint yourself with this memorable family. You won’t be sorry!