A Day Trip: Leaving the Ordinary Behind, and Heading to “The Lake”

Which lake? Depending on what part of the country you live in . . . well, it’s “The Lake”. Everyone knows which lake! There’s something refreshing, strangely liberating and generally relaxing about a day trip on the water. There might be a cluster of islands to choose from, or several long stretches of beach to relax on. There could be a famous restaurant you have always wanted to try, or the simple pleasure of snacking your way through the day, on local treats.

If you’re lucky the summer weather holds out. Even on an overcast, or blisteringly hot, June day there’s something special about heading to the water early on a Friday, kicking off the weekend. It’s time to relax, have a little fun and leave the real world behind.

Claiming to be the largest outdoor facility on Kelleys Island, with picnic tables, horseshoes, volleyball, plenty of room to throw a frisbee and the only wine production on the island, the local winery offers a half a dozen wines to taste, by the bottle, glass or sip. Ahhhhh! Kelley’s Island Wine Co. offers seating indoors and on a porch that wraps around the building, so the winery serves food all year long – small plates, pizza, soups and sandwiches. On a summer day it’s a quaint and quiet place to share a bottle of wine while nibbling cheese and trading stories. 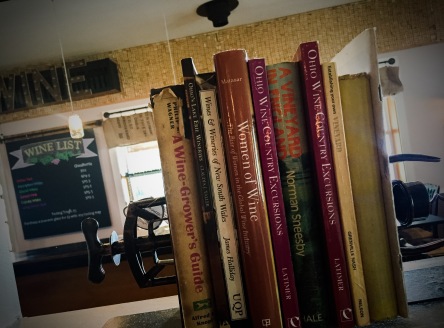 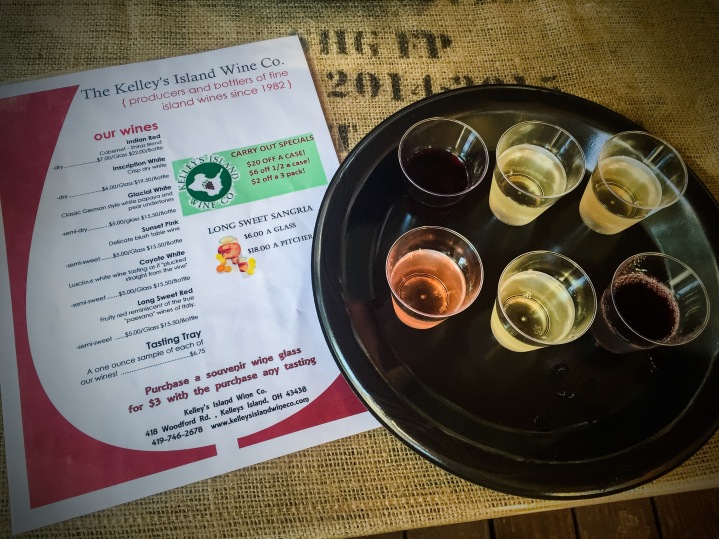 It’s only a 20 minute ferry ride from the Ohio mainland to Kellys Island. You’ll pay $20 for a round trip, and an additional $6 if you want to bring your bike along. When we arrived at the dock’s parking lot I was a little concerned. Swarms of YMCA summer campers overran the place, in matching neon orange t-shirts, lugging sturdy duffel bags and bulging black plastic bags. I remembered my camping days, and I hoped that the garbage bags were full of dirty laundry – a signal that the noisy campers were headed home, rather than about to board the ferry to the island.

I don’t exactly mind being surrounded by excited children, faces sticky with dripping popsicle and bodies salty from hour after hour of enjoying the summer sun. That’s just summer fun! But this is the peak season, and I’d overheard that there’s a music festival planned for the weekend, which is already bringing extra crowds. My last visit to Kellys Island was during off season, on a blustery, wet day. There were hardly any other visitors. This could be a very different experience. 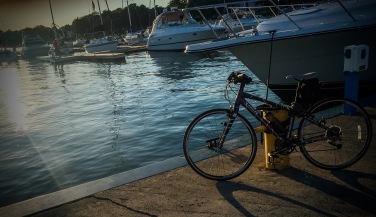 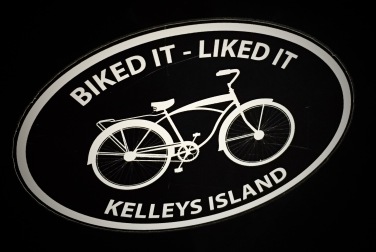 This time I’d brought my bike. I was looking forward to the festivities and summer fun, but was beginning to question the decision to drive 2 ½ hours from Columbus, without doing a bit more research. It was Friday, so I thought the island might be a bit less crowded than on the weekend. This would not be the case if the entire YMCA camp were headed in the same direction.

While unloading the bike from the back of my Subaru, checking to see if I remembered to put water in the water bottle; I notice the parents in the parking lot (who look more rested than you might expect) are helping camp counselors unload the large truck bed of the camp vehicle. They are carting heavy bags in the direction of their SUVs. It seems that the island is clearing out, and the parents are back on duty, so it’s time to board the ferry.

It’s standing room only along the outer edges the ferry. Pedestrians form a ring around the cars lined up in rows in the center of the boat; kayaks and bike racks colorfully top the roofs of the family vehicles. Glancing around, while the crew prepares to push off from the dock, I see that there’s a small seating area at the top of a set of rusted metal stairs. The stairs were once painted red, and lead up to kids pressing their faces to the class to watch the island’s approach, or to sneak glances at the ferry’s captain. He’s working the controls with ease, on what is likely his 10th return trip to the island today.

It’s a choppy ride, with a bit of wind, which adds to the fun of people watching. The other pedestrians rock back and forth, trying not to lose their balance. They are taking photos of the water, and the other boats. They are cramming together to take selfies, gripping their phones tightly so the devices don’t get tossed overboard. In the center of the ferry emergency breaks are engaged, but the cars and trucks join in the movement, rocking rhythmically, interrupted by occasional, unexpected jolts.

As we pull up to land, a lone grey heron stands erect at the end of the pier, welcoming new arrivals to the island, along with seasoned regulars. Or she’s guarding a nest, all the while eyeing us suspiciously.

As I get my bearings, I talk to the shop owners and the kids working for the summer at the visitor’s bureau. Asking where to go for lunch, I’m told that it’s pretty much all the same bar food – but “really great bar food”. (Is that a culinary category? In Columbus, hipsters might call that a gastropub.) My ears perk up as they run through the options, being reminded that the local winery serves food, and might be my best option for something that isn’t breaded, stuffed with meat and deep fried.

It’s a short 10 minute walk from the ferry to the “downtown” shops, restaurants and tourist activities, including miniature golf, bicycle rental and a music stage being erected for the weekend’s entertainment. Signs caution visitors to use sidewalks, leaving the streets to a constant stream of traffic. What clogs the streets appears to be about 60% tourist-driven golf carts, 30% tourist vehicles brought over on the ferry, and the remaining 10% is made up of the cars, trucks and scooters belonging to the approximately 325 year-round residents of Kellys Island. The official tourism website for the island claims that this population swells to nearly 5,000 during peak season, from June to August.

It’s easy to be drawn into the first gift shop we see, while walking into town from the ferry. It is owned by Vi, a woman who tells us she works 7 days a week for about 8 months, then retires to her stack books and unfinished art projects for the colder months. The population shrinks to its resident population, who bunker down for a cold winter, resigning themselves to not leaving the island once the lake freezes. You can get off the island, but it’s a $100 plane ride to get to civilization. Vi chooses to stay on the island, after 8 months of tourists. On the way back to the ferry Vi’s is the last upscale gift shop, and has had great retail success as a result.

But it’s peak season, and there’s a lot to see, especially by bike. Riding away from the tourist shops and sports bars, we have the road to ourselves. The sound of the water lapping against the shore carries us along the waterfront.  There are more cranes along the far side of the island, which must be a sign of good luck. The weather is perfect, sunny but not too hot, and it’s a pleasure to just cruise along. There’s a small sandy beach, with a campground attached at one end. Folks are in the water, on the water, and lounging beside the water. This is summer!

One remarkable part of this island, if you’re into geological sorts of things, is the glacial grooves. They are part of a geological preserve, and are fascinating in their history. Part of the Ohio History Connection, the landmark’s website describes the grooves cut into the limestone as “400 feet long, 35 feet wide and up to 10 feet deep, suggesting the tremendous power of the ice that formed them.” Containing fossils up to 400 million years old, the site is easy to cruise by without noting its significance. But it’s worth a stop on the way to the local winery. 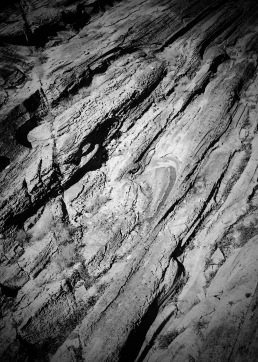 What happens if you miss the last ferry? Approaching the ferry dock around 8:45 pm, as the late June sun is quickly disappearing, there is no one at the dock, and the local tourism center and convenience store nearby are both closed. We should have checked the ferry schedule hours earlier, but we were too excited watching the sun set and eating ice cream. Sprint service on the island is ridiculously slow, and my Verizon iPhone is at 1%.

Island security approaches a small group that is forming, explaining that if they ever get left behind, locals will try to find them a room for the night. It happens! However, they may not want to face the price tag that comes with the room, on a busy weekend like this. We’re in luck, and hurry onto the ferry that pulls up a few moments later. We’re treated to  a beautiful finale to the sun setting on the lake.

Join me on the next adventure!