“Oblique Strategy #1: Think a thought. Then think the same thought again, this time without socks on.” A standard poodle, painted purple, and outlined in neon green glow paint, advises: “Try it! Really works.”

According to the Santa Fe tour books, the desert city enjoys 300+ days of sunshine a year, with low relative humidity. While this sounds pleasant enough, over time it might also become a bit dull. There’s a danger that long-time New Mexico residents, extended vacationers and repeat visitors might be lulled into a trance – a warm, static, undisturbed trance.

Adventure seekers are invited to take flight in a hot air balloon, soaring quietly across cloudless blue skies, above the long stretches of desert and rocky landscape below, in varying shades of terracotta, sand and sage. How peaceful!

This calm, meditative, rather Zen state of things exists in an upscale town dominated by galleries. These galleries are visited by serious fine art collectors, who have their wallets open, ready to pay  high price for one-of-a-kind original art pieces, and convincing reproductions. It also stands in sharp contrast to the psychedelic neon that comes to life, under black lights, on the outskirts of town, in an art space that’s…. hard to define.

In a trailer for the documentary “Meow Wolf – Origin Story” founding artists describe The House of Eternal Return, and the artist collective responsible for the exhibit, as a “venue for artists who felt like they were on the outside of the art market in Santa Fe, looking in,” and a place for “Santa Fe’s orphans of neglect.” You open the refrigerator, crawl through, and you wind up in another world! 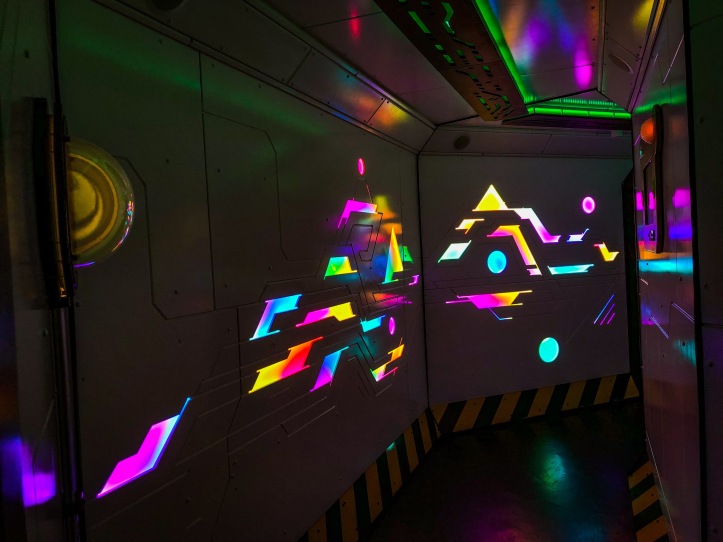 “The gallery art scene [in Santa Fe]” as described by one of the artists, “is a bunch of markety bullshit!”

The New Mexico tour-book does speak of extremes, at least in terms of climate. “In this high desert climate, warm days and cool evenings are the norm during spring, summer and fall, so a jacket or sweater is advisable, even during the summer months. It is wise to dress in layers.”

Within a single day there is a wide range of temperatures. Bright sunshine doesn’t overheat visitors because the air is thin, and humidity is low, but don’t get stuck out on the trail at night, without something to keep you warm – an extra layer of clothes, or a flask of whisky.

Perhaps the cultural climate also has another side, something to contrast the highly polished, downtown scene. It’s as if the uniqueness of the city is there, under the surface, buried behind the high-dollar tourism industry, if visitors stick around long enough, and look hard enough.

The weather is static from day to day, predictable. It’s stable. You have a pretty good idea of what you are going to get, day after day. This is not the case when visitors enter the vibrant, erratic, noisy and cluttered world of Meow Wolf. With the price of admission visitors fall down the rabbit hole, they enter the Twilight Zone, find themselves  thrust into the Upside-down, startled and trying to get their bearings.

It’s a good thing there are warnings posted on the walls – Please Note: Meow Wolf’s House of Eternal Return Includes: 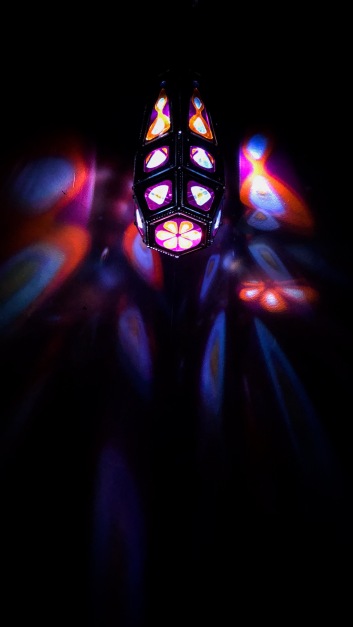 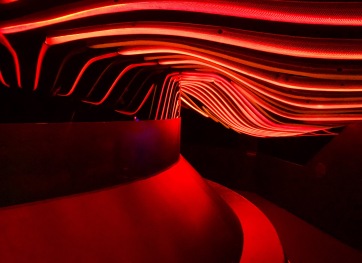 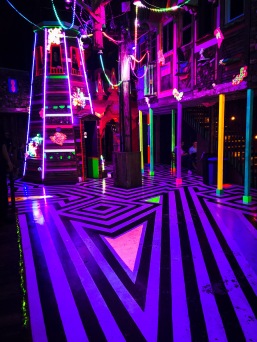 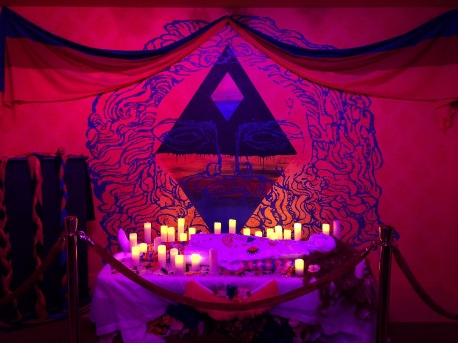 It’s an experience for everyone, however, and the signs go on to say: “Please watch your step, stay alert, and do not act in harmful ways to yourself or the exhibit. We want to ensure that every visitor has the optimal experience. Let us know if you would like assistance navigating the exhibition.”

In an old bowling alley, gutted and turned upside-down, then twisted into a tornado of color, lights and multidimensional sound, you won’t need your tightly woven sunhat or SPF 100. The dark hallways, tunnels, alcoves and overhead canopy, of this 33,000 square foot art space, are climate controlled. This means guests are protected from the intense sun and dry air.

Once you step through the refrigerator, not much else is controlled. Would you expect it to be? Every visit is uniquely different. The disorienting feelings don’t have anything to do with the high altitudes on the outskirts of Santa Fe. Or do they? High altitudes do affect people differently, and most people need a day or two to acclimate.

At Meow Wolf, there’s a bizarre, mysterious storyline in the periphery, sprung from the imaginations of 10 founding artists, working in a dozen different mediums. A first-time explorer might need to take occasional breaks from the overstimulation.

There’s a café and bar on site at Meow Wolf, but don’t expect that experience to ground you either. (Read about it here: Nebular Marbits & the King’s Mouth Golden Latte at Float Café and Bar) 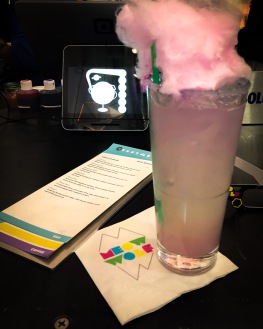 The writers of the travel guides might tell visitors to plan their visit to Meow Wolf on day 4 or 5 of their trip. In their words: “[We] highly recommend that you take it easy for the first couple of days, drink plenty of water and please be sure to pace yourself.”

Might we suggest a balloon ride, a stroll through the Santa Fe Plaza, or a nice meal of enchiladas with red or green chilies – your choice! Save Meow Wolf for later in the week, because once there you’ll find: 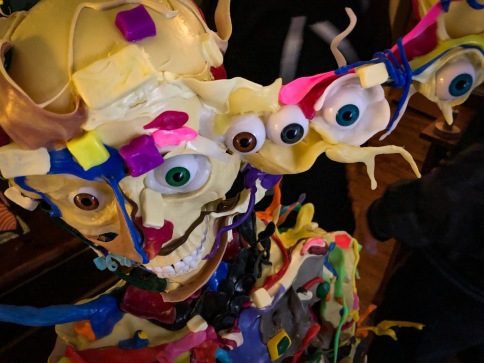 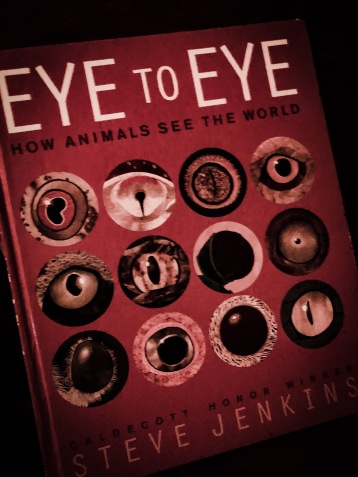 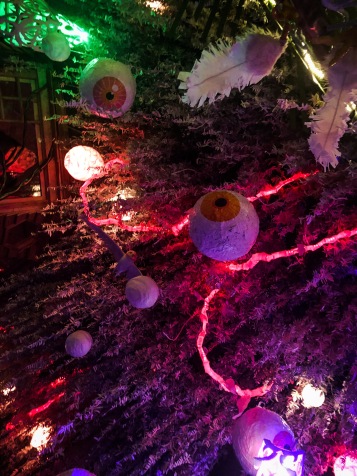 George RR Martin, author of “A Song of Ice and Fire,” which was later adapted into “The Game of Thrones,” invested in Meow Wolf early on. He supported the artists, and their artistic vision, by buying the old bowling alley and paying to help renovate it, then renting them the space. Why would he take this pet project on?

“Other dimensions, other times, a secret story. . . he was just pushing all my buttons,” Martin says in the documentary. The artists themselves feel a need to continue supporting those who feel like they are on the outside, looking in on an established and exclusive art scene, because that’s precisely where they came from.

Martin got his B.S. in Journalism from the Medill School of Journalism, at Northwestern University. He then went on to get his M.S. there. He moved to Santa Fe in 1979 because of the social, artistic and cultural climate. The surrounding area presents a beautiful landscape, and Santa Fe is a city with great food and an agreeable climate.

“Martin was starting to notice the loss of youthful spirit in Santa Fe. It bothered him that the town felt as though it shut down at 9 pm, and he decided to do his part in bringing life back to certain corners of the city.”  Young people were moving out because the art market is inaccessible. . . too high-end and exclusive.

In 2008 Meow Wolf group formed, as an artist’s collective – aiming at creating an alternative art and music venue. Prior to Martin’s investment, the 10 artists were living together in a tiny space, so all their money could go to the art. They were unpaid for their efforts, wondering if the project would ever be seen by the public. Thankfully, Martin’s investment paid off, and the work of these fringe artists is loudly on display. 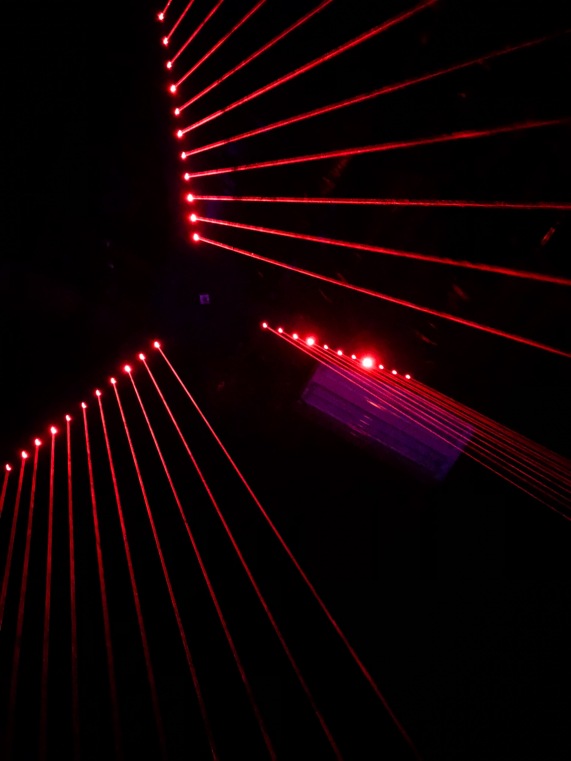 What will you see, when you make your way through the portal that opens via the refrigerator door, or slide head-first down a metal slide, pulled by gravity (or some other force?) through the round opening of the washing machine?

A neon glow forest that isn’t scary, but neither is it inviting. It compels visitors to follow a dark, narrow path, lined with glowing, bare branches. It’s not clear what this place is, but the colorful, fantastical environment invites exploration. The floor sparkles. A few steps in, you glance up to see oversized fish swimming overhead, and realize that you are submerged.

Playful characters, with dark undertones, inhabit a black & white cartoon land. There’s a gun-wielding snowman, sinister and foreboding. Carrots and ice cream cones are drawn with personalities (and faces). Anime characters rub elbows with Disney characters morphed by the imagination of the artists. 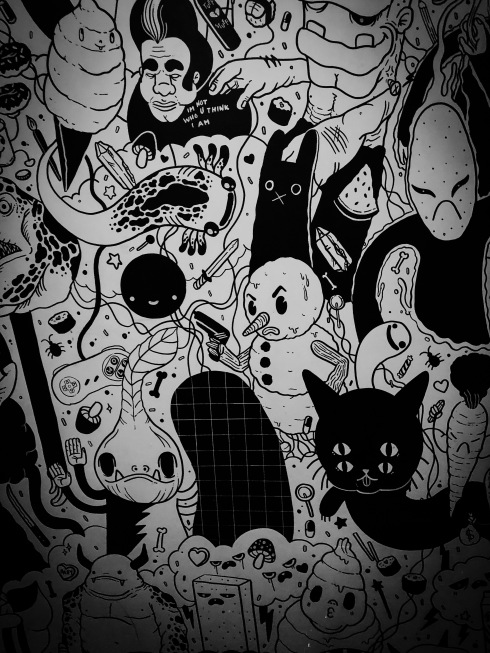 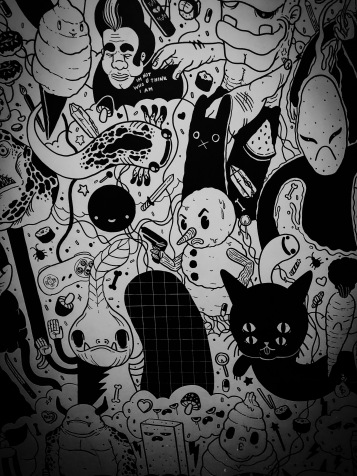 Down one hallway visitors are invited to participate in creating music by strumming laser lights. Down another, a chorus of forest creatures (static and “alive”) interact with the crowd, telling their side of the story, though often misunderstood.

If you can solve this mystery, you’re a step ahead of me. But I only had 1 day – perhaps I had not yet acclimated to the high altitude!