A Buck and His Harem: Rainy Season in Nairobi National Park, among the Impala, Zebra and Warthogs

In the distance, hovering over the Ngong Hills, rain clouds slide quietly into place, growing thicker with each passing moment. I love a good storm, with brooding clouds, and the sun’s persistent attempts to break through the dark, dense cloud cover at sunset.

October is the start of rainy season in Kenya, and I can’t recommend a better time to visit Nairobi National Park. To be fair, this is my first visit. Being off-season, there are fewer tourists clogging the paths that cut through the park. To make an educated comparison, I suppose I’ll need to go back at the height of dry season, when the sun beats down on desert landscapes.

But I’m partial to cloudy skies, for their moodiness, the dramatic backdrop they provide, and the soft, muted light that filters through the atmosphere. When the sun breaks through we’re treated to long, angled rays that pick up the red dust being stirred up by herds of Impala. I follow the smooth curve of a rainbow, at the edge of the bank of clouds, to discover Warthogs folded forward on their front knees, to root in the dirt.

It’s under these skies that we first journeyed into the National Park, while maintaining a view of downtown Nairobi, Kenya.

“Powerful, economical and trustworthy,” the wheels of our tour guide’s Toyota Hiace 10-passenger van carry us effortlessly across the deep grooves in the dirt road (see the Toyota website). We have the van to ourselves, with the roof extended upward, so we can stand to photograph from the top of the vehicle, while still protected from the charge of a White Rhino or the restlessness of a herd of recently disturbed Buffalo.

We pass armed guards at the park entrance, and cautionary signs, warning us not to lean out of the side of the vehicle to take photos, lest the lions make dinner of our DSLR cameras – or our extended limbs. In the dense woods, which many of the animals use as a birthing ground and nursery, we move past a giraffe carcass. We would have missed the last bits of the rib cage, if our guide hadn’t pointed it out.

“The Lion has been hunting here,” he explains, from the drivers’ seat. “We will try to see him today.”

For the first 20 minutes of the guided tour I feel like I’m on the backlot of Disney’s Animal Kingdom. . . and the animals aren’t cooperating. I imagine some park security adviser or park ranger speaking into a walkie-talkie – “Cue the Zebra,” then “Release the Rhino” and “Use the Impala to lure the Lions.”

I’m reminded of the scene in Jurassic Park, when a tethered goat emerges on a platform, raised from beneath ground, into an enclosure, to be fed to the carnivorous dinosaurs. This must be amateur hour, I think, because the landscape is beautiful, but the remains of the giraffe are the only “wildlife” I’ve seen so far. I squint into the forest, trying to determine whether the carcass could be a carefully placed prop. Will an animatronic Lion appear? Would I know the difference? Would there be a surge of adrenaline, all the same?

We continue, and the forest recedes. The landscape opens, we discover watering holes, muddy patches of red earth, and grassy fields. . . and the animals appear. 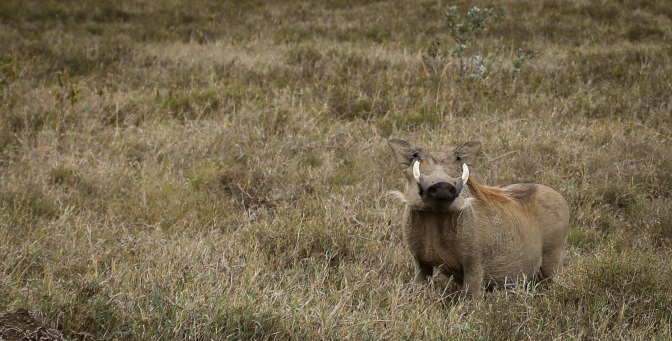 Zebra and Impala seem vulnerable, exposed, so easily seen by potential predators. But that’s the point, we learn, because the predator herself is just as exposed. Herd animals can easily see the predator’s approach and outrun the threat. There is a great deal of effort and coordination in bringing down a giraffe.

These animals are accustomed to vans, trucks and Jeeps, full of tourists, aiming lenses at them, rather than guns. The wide-open landscape works to our advantage, and we are in for a treat. Some of the animals seem to pose for us, and we are ready, with cameras and video equipment in hand. 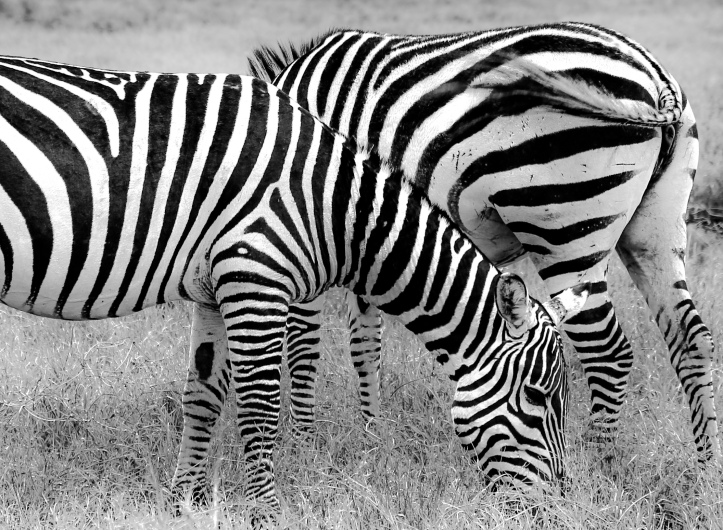 Just the day before we had traversed the landscape of Hell’s Gate National Park on mountain bikes, and I was able to capture close-up images, even with my 24 – 105 mm lens. Zebra casually strolled by, heads held high, almost within arms reach. Warthogs scurried beside our bikes, just barely beating us to a break in the knee-high-foliage, to cut across the dirt road we cycled on. But there were Lions in Nairobi National Park, so we kept our distance, secure in the van. The dramatic sky, the silhouetted trees, and the vastness of the park became my subjects. (Be sure to visit the “Accidental Wanderlust” Home Page, for links to the other blogs about this East African trip to Kenya, Uganda and Rwanda.)

Taking in the whole scene I captured images of young Impala bucks, testing their fighting stances against one another. They did this in hopes of growing stronger, challenging the lead male one day. The strongest of the males was off in another pasture, with his harem of females, after all. What young buck wouldn’t want that for himself? 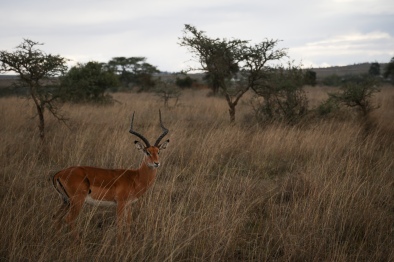 Seeing these animals in a natural setting, away from the cages and thick, protective glass of most zoos, was a treat. Our driver spotted most of the animals before we did and slowed so that we could capture their images, composing a shot and telling a story, before they noticed us. Our tour was meant to start around 1 o’clock, but due to heavy traffic and a change in drivers we didn’t arrive at the park entrance until about 2 pm. It was another 20 min. before we started into the forest, after paying park fees, dodging Masai Warriors (who would charge a fee to take a picture with them – we had already done that, a few days prior), and raising the top of the van.

Our tour wasn’t cut short – this delayed start just meant we were able to witness the most amazing sunset, between storm clouds, and had more of the park to ourselves. I suspect the driver kept us in the park a bit longer than he was meant to, in hopes of coming across the Lions, out for an evening hunt. It’s my impression that the tips drivers receive from tourists are outstanding when a tour group gets to see the Lions, so he tried to give us that experience.

We did not see the Lions – another reason for us to return to Kenya one day. We did see Zebra, Rhinos, Giraffes, Hartebeests, Impala, Eland, Buffalo, Hippo, Crocodile, Jackal, and a slew of bird species. This was absolutely worth the cost of admission, and in the end, I was certain I was not at a Disney theme park. I hope everyone can have an experience like this one day! 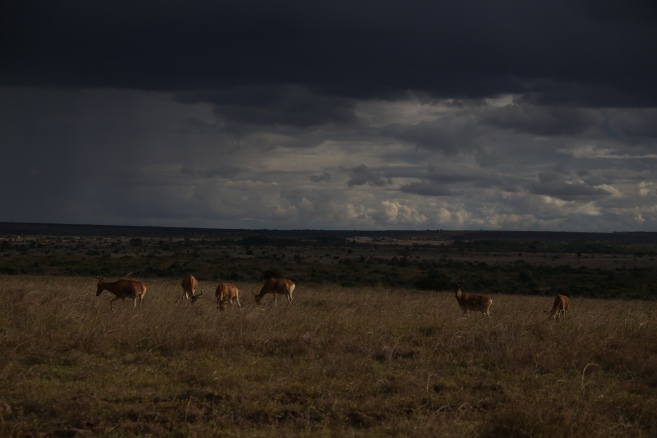 (Note: Images for this blog are a mixture of photos taken at Nairobi and Hell’s Gate National Parks, as well as a few animals we encountered while in transit to the parks. If you’re paying attention you’ll notice that our day in Hell’s Gate was under blue skies and friendlier cloud formations – I left with a sunburn that day.)