It’s no secret that I make the most of being out on the road, exploring the city, trying out new restaurants, and visiting local art galleries, music venues, and cultural festivals. I thrive on this visual, intellectual and emotional stimulation, when I’m not missing life back home. That’s life on the road, for someone who travels for work, on a regular basis. That’s also the root of “Accidental Wanderlust: the Art, Adventure & Attitude of a Work Traveler”.

On relatively short notice, I was asked by my employer to take my training classes “on the road”; things are always changing in the business world, and this was no exception. The goal was to bring this training to an entire District’s photography staff, conducting in-person classes that would allow interactive learning, hands-on practice, and face-to-face Q & A.

I planned a route through the District, which included 5 states in 8 days, and 7 “Major Metropolitan Areas”, loosely defined. It was decided that I would start in the Twin Cities (Minneapolis and St. Paul, MN) and work my way through the Midwest, finishing up in the Windy City (Chicago, IL) just in time to attend my 25 year high school reunion. Perhaps I’d skip the reunion, and meet a handful of high school girlfriends for drinks instead, but the trip was sure to be one full of memories (both flashbacks and newly created ones) either way.

My adventurous spirit escalated to a whole new level, in this type of fast-paced travel environment. I really want to experience these cities, as they are, beyond what every tourist who comes to town gets a glimpse of.

In just over a week I’d be exposed to art, architecture, music and great food! I’d complete a “Couch to 5K” training run (walk / jog?) along Lake Michigan, on a familiar stretch of lakefront that I spent a great deal of my college years visiting. I’d explore the city my father lived in during the time he was courting my mother. I’d get to photograph the Quaker Oats plant he spent a couple of years in, working for a company he ended up spending 20 years with.

There were daily adventures, on this tour of mine, to unique places and beautiful sights, so come along!

Flying into the Minneapolis Airport, I’m struck by a feeling of familiarity. I’ve been here before, and as soon as I exit the plane I’m reminded of how much impact the visual arts in public spaces can have.

It’s a grey, early fall day, and the muted light of an overcast sky shines through windows that span from floor to ceiling; the airport architecture itself is open, welcoming. That same, soft light brings a colored glass sculpture, an installation piece, to life. Large 3D diamond shapes, made of glass, are suspended from a rail mounted to the ceiling, hanging in patterned rows; they are an extension of a backlit rainbow that began as a streak of color on a nearby wall. The display ends in a metallic figure, with pointed limbs, reaching out – like a Hollywood star.

Throughout the terminal, artificial light fills in the dark spots that window light can’t reach; this airport won’t succumb to darkness, despite long winters that might invite a sense of doom and gloom. Light illuminates an art piece from within – there are dozens of glowing fish . . . Or are they fish. . . ? Or blimp-like, fantastical transportation vehicles, like ancient spacships. . . .?? My imagination is getting away from me. . .

I think back to all of the airports I’ve been in, and wish I had documented more of the art I’ve seen hanging from the ceiling, decorating the walls, and filling empty space, in an otherwise sterile environment. The Minneapolis airport (MSP) is worth taking notice of, thanks to the Airport Foundation.

“The Airport Foundation MSP dedicates itself to enhancing the experience and exceeding the expectations of travelers at MSP International Airport, as well as supporting the airport and broader aviation community.” 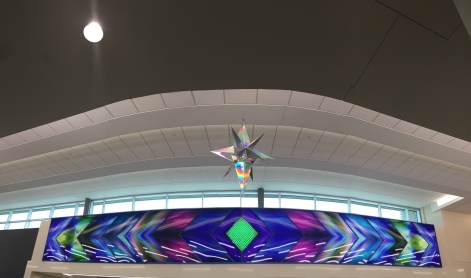 In addition to the more static visual arts at the airport, culture-seeking travelers can spend time in The See 18 Film Screening Room, cleverly named for its location – in Concourse C, near Gate C18. The airport website explains that the screening room is the first state-of-the-art cinema in any major U.S. airport. Free film screenings are shown in the cinema around the clock, and are supported by The Film Society of Mpls-St. Paul.

For nine years I worked as a Training Professional (dabbling in Management), and as a Photographer for a rather large photography company, with national headquarters in Minneapolis, MN. At least once a year there was occasion for me to visit Minneapolis, for staff development, to celebrate the success and growth of the company, or to stand nervously on stage, wondering who this year’s Photographer of the Year would be. (It was never me, but I came pretty close to the $25,000 prize!) 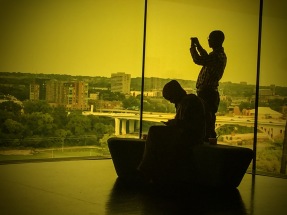 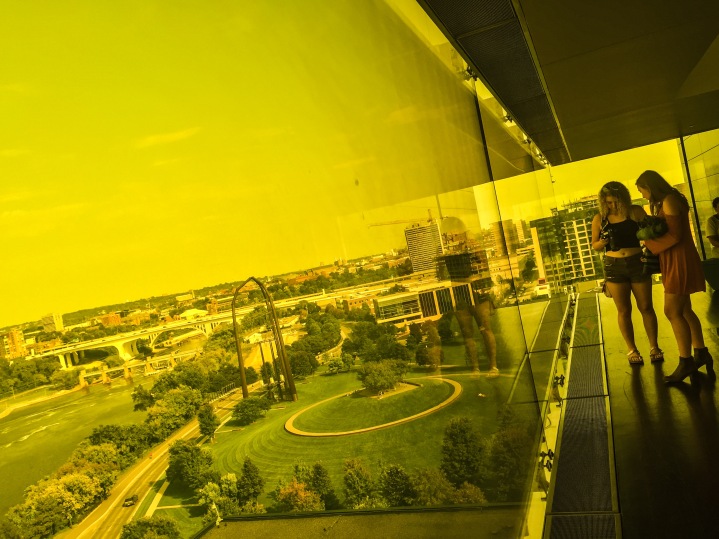 A favorite spot in Minneapolis, for local Portrait Photographers, is the Guthrie Theater. The theater opened in 1963 to sell out performances, after an aggressive promotional campaign, powered by volunteer efforts. It took years to take this resident theater from the status of an idea, tossed around by Sir Tyrone Guthrie, Oliver Rea and Peter Zeisler, to a fully functioning theater, performing the classics.

Guthrie was “disenchanted with Broadway”, its commercialism, and the neglect of classic theatrical performances, including Hamlet, which opened the theater’s Playbill in 1963. While I was there visiting, the current cast of actors was performing Romeo & Juliet. I was able to sneak onto a theater balcony, and watch the rehearsal, for just a bit, wishing I had the time to stay for the evening’s full performance.

“The idea of a major resident theater was introduced to the American public in a small paragraph on the drama page of The New York Times on September 30, 1959, which invited cities to indicate interest in Tyrone Guthrie’s idea. Seven cities responded: Waltham, Mass., Cleveland, Chicago, Detroit, Milwaukee, San Francisco and Minneapolis/St. Paul (which was not only interested but eager).” (Guthrie website) 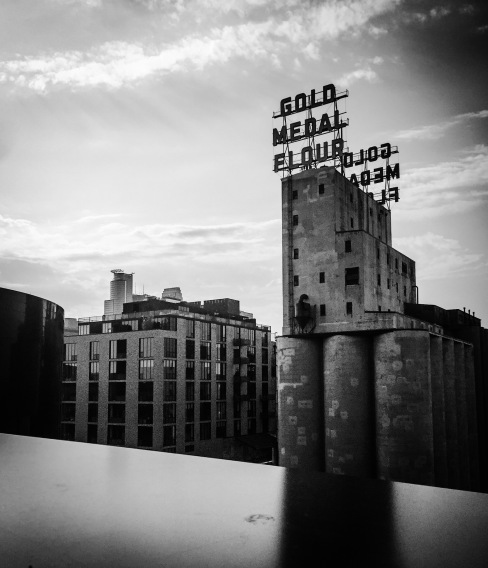 Guthrie and his supporters were “drawn to Minneapolis/St. Paul because of its location in the heartland of America, the vitality of the cultural community, the presence of a large state university and many small colleges, and the enthusiasm shown by the Upper Midwest for the new theater project” (Guthrie website). The theater brought reparatory theater to Minneapolis, and patrons have embraced it ever since. They count on the resident actors to put on a great show night after night, no matter what characters they are playing this month.

The stunning architecture, downtown location, and ample event spaces attract brides, along with their elaborate wedding plans, large bridal parties, and the Photographers who come along to document the event. High school seniors have come to expect more and more from their senior portrait session, and The Guthrie gives them a space to express the more sophisticated side of their personalities. More than one fashion shoot has taken place in the theater, and its large open spaces, capturing the skyline, bathed in the yellow light that pours through the windows.

So, the theater doubles as a performance space, and a contemporary fashion photo backdrop. One evening it’s transformed into an elaborately decorated event space, hosting an intimate wedding for 50 guests, and the next it’s serving Cosmopolitans and Mojitos to several hundred theater patrons, during intermission.

Is it because I’m a Gemini that I’m drawn to unique places, with dual purposes, often used in ways other than what they were initially designed for? These two cities, Minneapolis and St. Paul, are known as the “Twin Cities” after all. My Hyatt accommodations, in downtown St. Paul, had me laying my head on a rather plush pillow, in what used to be St. Paul’s Custom House. 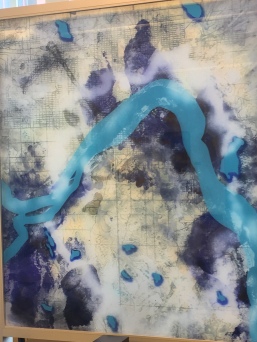 Located on the site of the old steamboat landing, on the north bank of the river, the Custom House has been adapted for reuse. The art deco building was formerly a post office and customs operations, housing other federal agencies and offices. Besides being converted into a hotel, the Custom House now houses upscale apartments and dining. It sits in an area surrounded by parks, bars, entertainment and restaurants.

The location’s marketing campaign describes it like this: “Custom House, a towering art deco building, historically rich in American industry and craft, has inspired a residence that surpasses expectations and provides the finest in contemporary lifestyles.” (Custom House website)

Does that mean there are hipsters living in St. Paul, MN?

“The city of St. Paul, Minnesota, is sometimes overshadowed on the national scene by its neighbor, Minneapolis. But when it comes to adaptive reuse projects, St. Paul has moved into the limelight.” (National Trust for Historic Preservation website)

Hungry, and looking for a unique dinner stop, I discovered Cosetta Eatery & Market. The Italian marketplace declares: “St. Paul’s Little Italy just got a little bigger,” as it has expanded to include an eatery and pizzeria. Its third story features Louis Ristorante & Bar, and its Italian market has recently expanded, carrying a wide selection of imported ingredients, for budding chefs like myself. Chef-prepared take-away meals and authentic cannoli pastries exude Italian flavor!

Whether you’re interested in grabbing a quick slice of pizza or sitting down to a more elaborate meal, with a nice glass of Italian wine, Cosetta is happy to accommodate. I took a seat on the third floor, requested the cheese plate, per usual, and wasn’t disappointed. When the bread and fig jam proved too sweet for my tastes, the waiter was happy to exchange it for something a bit more savory.

I lingered, looked out on the streets of St. Paul, and wondered what the rest of this trip would bring. I had a full week ahead of me, and numerous cities to explore.

In transit. . . . from Minneapolis to Cedar Rapids, IA

I was in transit, headed out from Minneapolis, with several hours of driving ahead of me. I was aiming for Cedar Rapids, IA, which I had never visited before this trip. It was a long drive, on rural roads, driving past many corn fields, small towns, and intersections that were signaled by little more than a bent stop sign. No flashing lights. . . no exit ramps. . . no elaborate billboard marketing campaigns.

So, I was delighted to learn that Four Daughters Winery was just beyond one of those rural intersections. The area was rather isolated – or so it seemed, as I was absorbed in my latest book on tape, and unsure how many more hours I’d be behind the wheel of my rental car. When I got to the winery, it was rather picturesque, and I found myself on 6 acres of vineyards, in Southeastern MN.

I discovered a fully operational winery, cidery, restaurant, and event center. Locals were chatting over lunch on the patio, while a group of young women celebrated a bridal shower, tasting whatever the waitresses placed before them. . . red. . . or white. . . or the local’s special Loon Juice Cider. I wished I could indulge, but had a meeting to get to in Iowa, so I purchased a bottle to take back to my hotel.

If I were to make a trip back to the winery, it would be as a volunteer. . . “It’s Harvest Time! And we need some volunteers to pick grapes! (September – October). We’ll treat you to a glass of wine and a light lunch,” said the chalkboard out in front of the winery. If I couldn’t make it back for that, I might consider putting a team together for the grape stomp, reassured by knowing that no grapes stomped in this competition are used to make wine!

Four Daughters was a welcomed distraction, to break up the drive, and warranted pressing pause on the audio book. I was listening to a non-fiction book called Gulp: Adventures on the Alimentary Canal, by Mary Roach. Alimentary (adj. aləˈment(ə)rē/) means “relating to nourishment or sustenance. Wine counts. . . right? I’m not sure I’ll make it back, but just about everything can be purchased online these days!