We Went on a Bear Hunt: Joy, Laughter & Bears fill Clintonville streets, during a Difficult Time

“Social Distancing,” “Work From Home” and “Quarantined” are not a part of our vocabulary that evokes feelings of community, social support, or a sense of belonging. Residents of Clintonville, OH refused to let their chapped hands (from handwashing and hand sanitizer) or troubled minds (the result of COVID 19) dampen their spirits on an overcast, rainy weekend in March.

Instead, they accepted Marla Davis’ invitation to go on a neighborhood Bear Hunt!

Clintonville was eager to participate! From Old Beechwold, the old zoo area west of Hight Street, into the neighborhood surrounding Whetstone Park, through downtown Clintonville, all the say to South Clintonville, just north of Old North Columbus (which borders the OSU campus area) there were bears!

Inspired by the children’s book “We’re Going on a Bear Hunt,” by Michael Rosen (playwright) and Helen Oxenbury (illustrator), or just because they were up for a little fun on a drizzly Saturday, Clintonville residents and their bears, young and old, came out to play.

Event Description: “Everyone who wants to participate will put a teddy bear in a front window so folks can go on a bear hunt. We will walk around the neighborhood and try to spot as many bears as possible.

Remember to wash your hands
and remain socially distant from other hunters! But bear calls, whistles,
costumes, and general silliness is encouraged.” 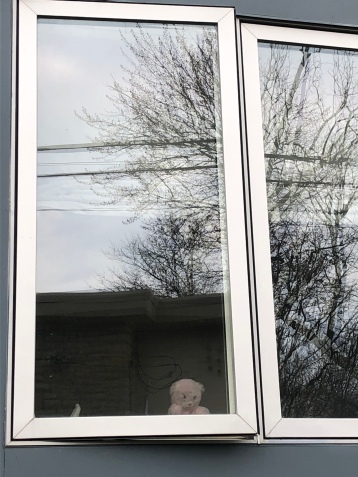 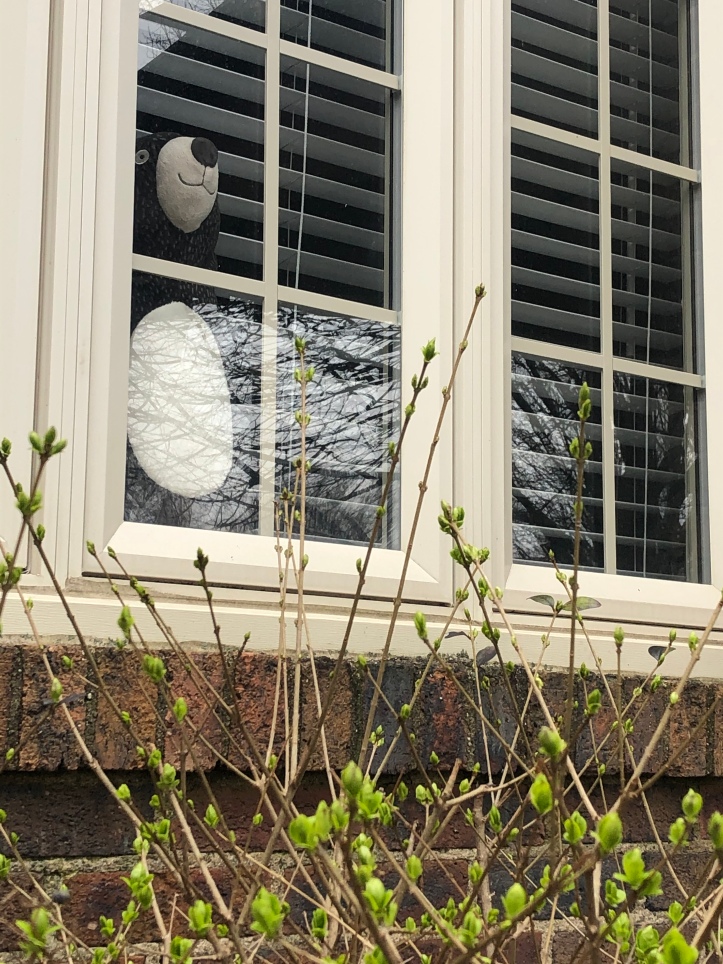 The year 2019 marked the 30th Anniversary of the children’s book. It’s a delight to see young children, read to by their parents or learning to read themselves, embracing the story, which begins:

We’re going on a bear hunt; we’re gonna catch a big one. What a beautiful day! We’re not scared!

Undeterred, the group bravely pushes on. I’m reminded how important it is for children to be exposed to books at an early age. Clintonville is a land swarming with Little Free Libraries, so when I moved to the neighborhood, I decided NOT to move my own Little Free Library onto Tibet Rd. Instead, it continues to reside on Skidmore, a stone’s throw from 400 West Rich, an artist community in the Franklinton area.

I’ve been known to relocate books from Clintonville to Franklin, in hopes that the residents in the area, who visit Dodge Rec Center, might stumble across it, and take a book home with them. My father was an elementary school Reading Specialist and my sister is a middle school Librarian, so I’ve always had access to books. I try to do my part to make that true for everyone!

These days most of the books for my 2020 Non-Fiction Book Club are in a digital format, loaded onto my Kindle, but the words, the messages, are impactful, just the same. Whether families were celebrating the art of illustration, the fun of exploring their imagination or the joy of getting out of the house, they were out there on the streets of Clintonville, greeting us with: “Are you hunting for bears?”

Yes, we were, and so was much of Clintonville, even replicating the book’s cover illustration!

We were not disappointed, finding plenty of bears . . . and friends of bears!

The classis book teaches bravery, and a sense of adventure, while introducing new words for the things young kids experience out there in the world, as the band of “hunters” encounters further obstacles, including:

A forest – a big, dark forest.

A snowstorm – a swirling, whirling snowstorm.

A cave – a narrow, gloomy cave.

I was pleased to add a new word to my vocabulary: Goggly: Adj. (comparative more goggly, superative most goggly): Resembling goggles, used mostly in relation to eyes. 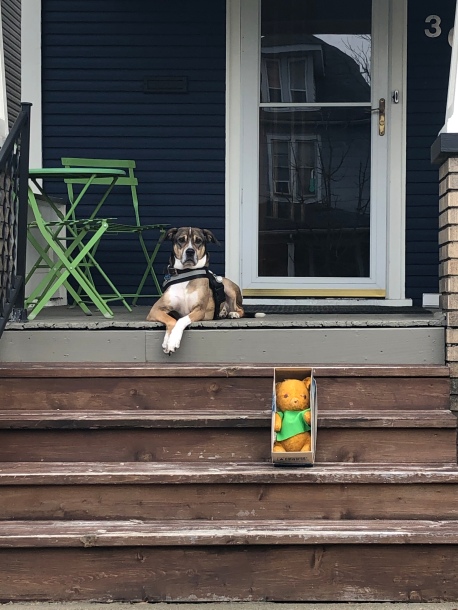 This wasn’t my first time searching for bears. . . I saw evidence of bears on a bike ride through Shenandoah National Park, and my travel companion caught a glimpse of a young bear in Glacier National Park.

One day I’ll see a bear firsthand . . . but only if I keep hunting! 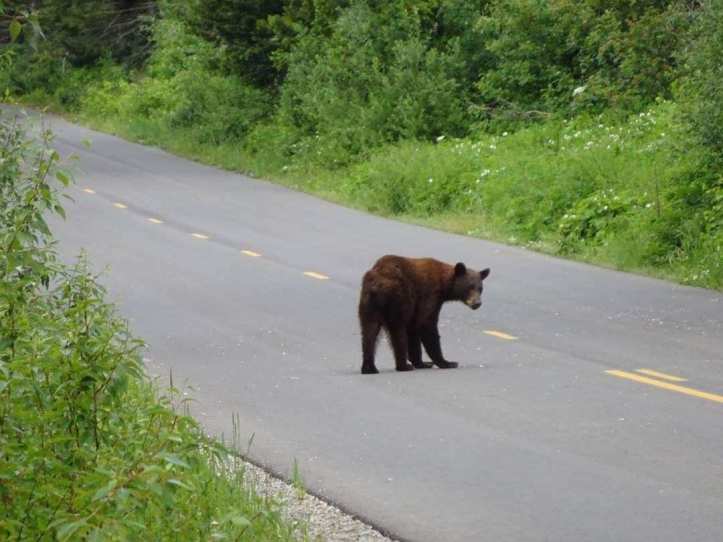 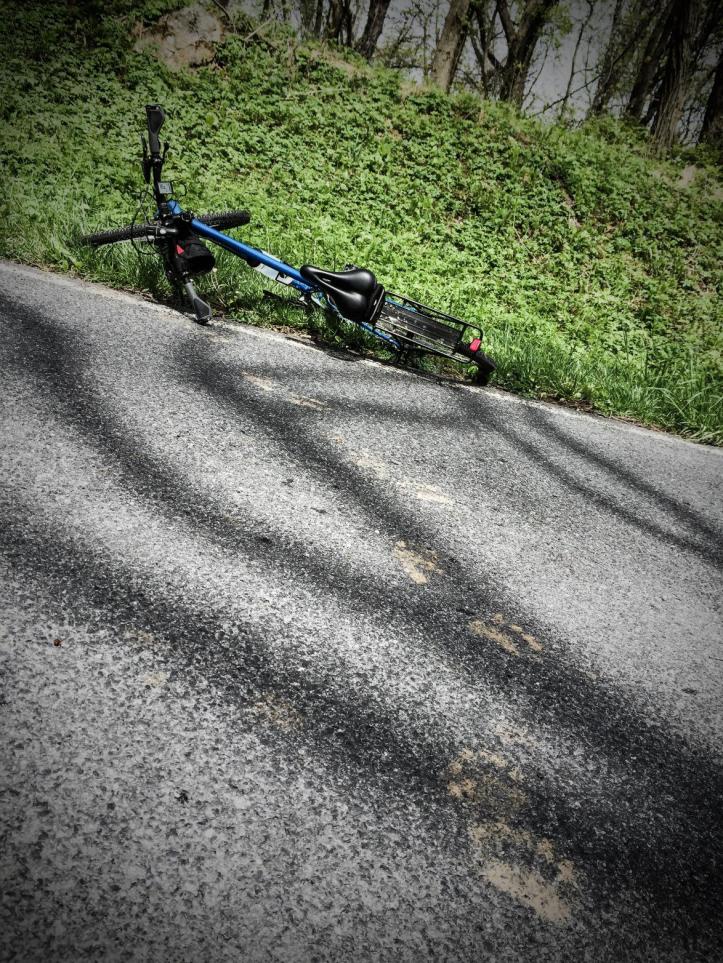 Join me on my next (real or imagined) adventure,

Wear lifejacket when near the river, and have fun.