Creamy, tart and vibrantly colorful, I’d consumed four slices of Key Lime Pie, in just over 24 hours. It had been a whirlwind weekend in Key West! I’d washed these 4 desserts down with double that number of espresso drinks.

I’d had it in my mind that I’d sample a sugary slice everywhere I went, in search of the perfect pie, a shining example of this signature dish. What the blazes was I was thinking? With that much sugar and caffeine in me, there wasn’t room for much else! The pie, with its graham cracker crust and whipped cream topping, had strangled my appetite for “real food.” The coffee I needed, to cut the sugary sweetness . . . well, it was excessive, to say the least.

By the time I took the final bite of my third slice, the lively spirit of the Florida Keys was surging through my veins – I’m afraid to know what levels my blood sugar was reaching. I had plans for one more slice, if the Fort Lauderdale airport would indulge me, and indulge me it did!

Here’s how the 4 Key Lime pies stacked up – I just couldn’t bring myself to eat a 5th. 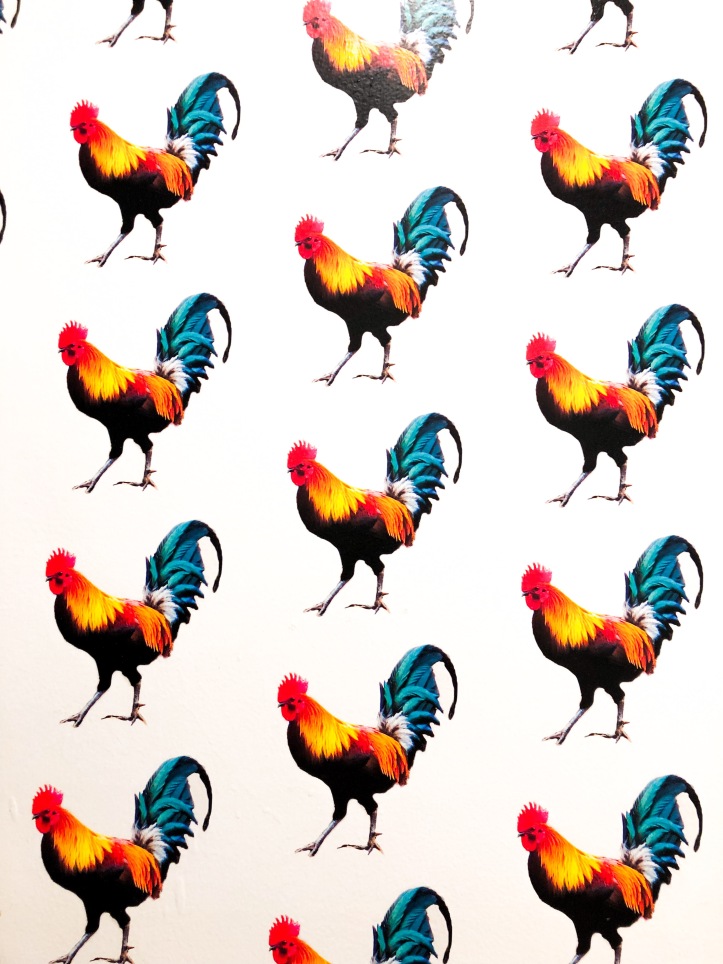 At the back of a small courtyard, near the corner of Southard & Duval Street, I tried my first slice of Key Lime Pie at the Cuban Coffee Queen. I had hoped to find the dessert there, but it was really the Cuban coffee that brought me to this location. I was drawn to the Cortadito (a double Cuban espresso, with cane sugar, and topped with steamed milk).

It had been too many months since I’d brewed my last pot of genuine Cuban coffee at home, and the Duval St. corridor had almost as many coffee shops as tourist bars. (Okay, that’s not possible, but there were a lot of coffee shops.) I was in luck, and found the dessert I was looking for.

The pie was a stand-in for lunch, on the heels of a carb-loaded breakfast of pancakes, grits, eggs and a New York-style bagel that I just couldn’t finish. Maybe not the best choices, but it was a spontaneous vacation weekend getaway, and I spent it in a cozy diner the locals frequent, with our gracious host. The breakfast was delish and the pie was delish.

Creamy and classic, the pie didn’t last long. I was so distracted, by the baby chicks that strolled onto the patio the coffeeshop sits on and the colorful environment of Duval Street, that I failed to take a photo of my first slice of pie. So, here’s a taste of the art and architecture of Duval Street – there really is a lot more to it than the tourist bars. 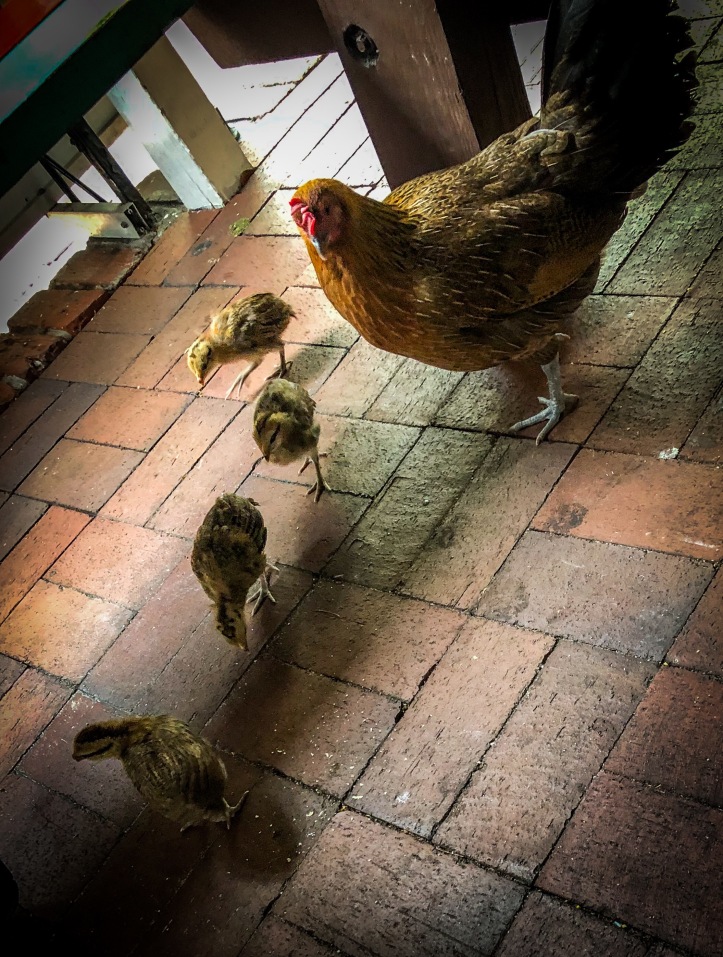 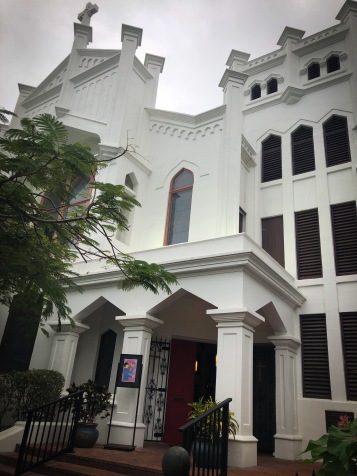 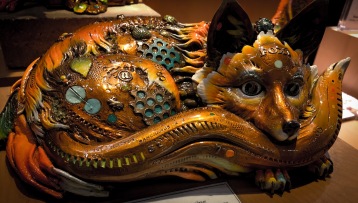 When it was time for a late night slice of pie, to finish off  a busy day, I was bright enough to order it alongside some Chamomile Tea. At Moondog Café & Bakery we saw the desserts as soon as we walked in the door, and the first thing I noticed was that there was only one slice of Key Lime left in the display counter. And it was Key Lime cheesecake – yes please! That had my name on it.

The pie reminded me of a lemon bar, with just a think layer of the glossy lime-flavored gel, seated atop a thicker, creamier layer of cheesecake. The graham cracker crust the dessert sat upon was moist, and the meringue-style topping had toasted peaks, adding another dimension of flavor to the final bites. I had to share the slice – remember, it was the last – but that’s okay. 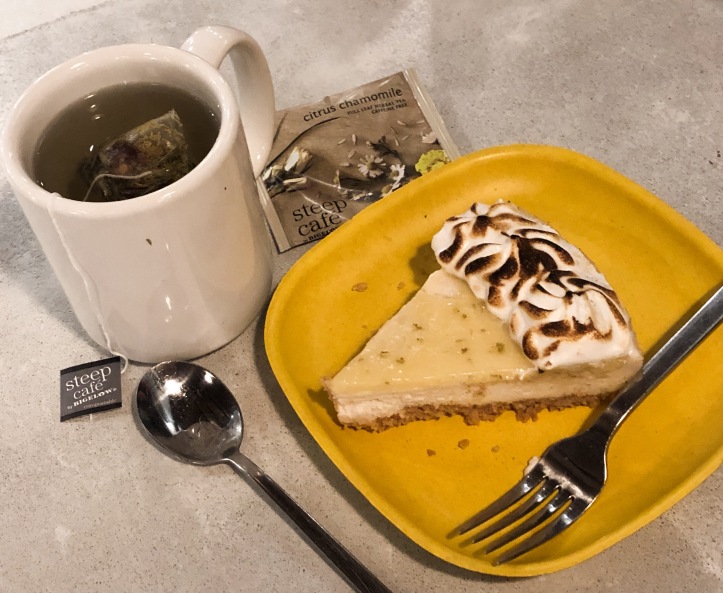 When I saw a waitress walking by with an entirely new pie – straight up Key Lime, without the cheesecake, I was glad I’d ordered when I did. The beautiful new Key Lime was smothered in meringue that stood taller than the rest of the pie. I’m not a fan of the stiff spikes of meringue – at least not as much as I am a fan of cheesecake!

We lingered at the bar, chatting with the bartenders, as the café wound down for the evening, and prepped for the Sunday morning breakfast crowd. The inside of the café was covered in murals, neon and local art. One waitress had never heard the story of Moondog. Her coworker did his best to fill her in on the character who dominated the main dining room’s colorful mural. Here’s a synopsis:

“Louis Thomas Hardin… also known as Moondog, was an American musician, composer, theoretician, poet and inventor of several musical instruments. He was blind from the age of 16.

Hardin lived in New York City from the late 1940s until 1972, and during this time he could often be found on 6th Avenue, between 52nd and 55th Streets, wearing a cloak and a horned helmet sometimes busking or selling music, but often just standing silently on the sidewalk. He was widely recognized as “the Viking of 6th Avenue” by thousands of passersby and residents who weren’t aware of his musical career.

Moondog’s music took inspiration from street sounds, such as the subway or a foghorn. It was characterized by what he called “snaketime” and described as “a slithery rhythm, in times that are not ordinary […] I’m not gonna die in 4/4 time”.” (Wikipedia)

Moondog Café is only one street over from Duval Street, but at night, walking in the rain, Whitehead St. had a quiet atmosphere. Formerly a great (cheap) breakfast place called Papa’s, the café is just across Olivia St. from Hemmingway’s former residence, now a museum and sanctuary for 6-toed cats. A 2ndvisit to the house is worth the time, but that night, I was happy to linger over my Key Lime cheesecake. I’m not sure the folks at the private party going on at the house, under a large white tent, would have appreciated me jumping the fence to take a spin on the dancefloor! 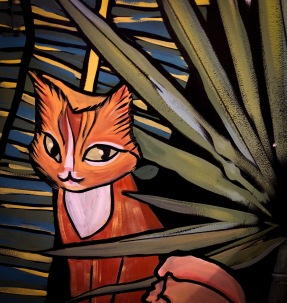 I knew where my 3rd slice of Key Lime pie was coming from even before my plane had landed in Fort Lauderdale, on Friday. I’d passed the Blonde Giraffe Key Lime Pie Factory on the way down to Key West and I had indulged there on my last visit to the Keys. At mile marker 92, Blonde Giraffe Key Lime Pie Factory is ½ between the airport mile marker 0, where US Route 1 ends, not far from the southernmost point of the Continental US.

I’d consider driving there from Fort Kent, Maine, at the Canadian border, where US Route 1 begins. The 2,369 mile drive just might be worth it – the Blonde Giraffe no longer ships its pies! (note: You can still order its other products, including beautiful Key Lime cookies, online, to be shipped to your home.)

There had been some improvements in the 2+ years since we’d been to Blonde Giraffe, including a parking lot that has been transformed into a courtyard, with Adirondack chairs to recline in, eating your pie at your leisure. Classic Key Lime pie was sold by the pie or by the slice and could be drizzled in chocolate. I stuck with the pure, unembellished Key Lime pie, and I was glad I did.

The lime flavor, tart and fresh, was center stage in the recipe for this pie. Natural lime flavor was not masked by excess sugar or heavy meringue. Each bite seemed to melt when it touched my tongue, and the slice did not last long. I was back to drip coffee, served black, which complimented the pie perfectly. A bite of pie, a sip of coffee, and I was ready for the next bite.

I was being watched like a hawk! Well, I was being watched by a brave, assertive chicken. . . and her brood. They gathered to eat the dried corn that sat in bins on one of the nearby picnic tables, but they were very much more interested in the whipped cream that decorated my slice of Key Lime. It was cute at first, but I grew concerned that the sugar might not be the best thing for a chicken. 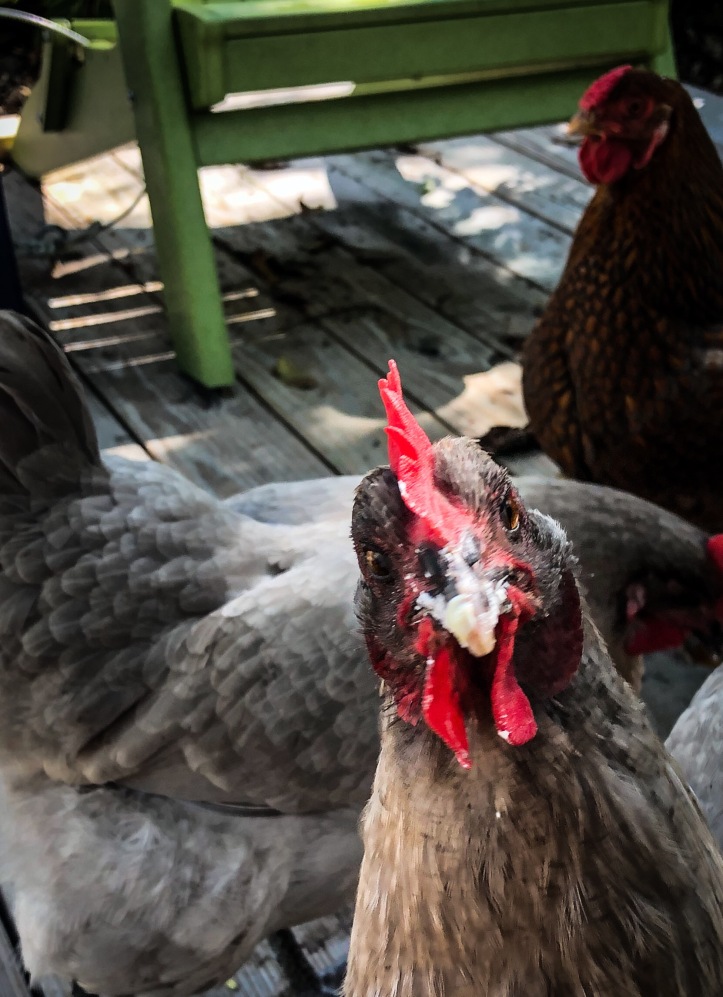 I wasn’t sure all this sugar was the best thing for me. But I savored it, eating slowly, to make the experience last. The courtyard had its own entertainment, in the form of furry and feathery critters. There was a trio of energetic bunnies, a resident cat that had wandered into the courtyard looking for food several months earlier, and of course the chickens. In the keys there are chickens just about everywhere.

My visit ended with a beautiful Key Lime cookie that had been strategically place atop my coffee lid. This was marketing at its best, in the form of a free sample. I’d intended to leave the site with only fond memories and the lingering bliss of a sugar high. Instead I left with multiple bags of the sweet cookies! The staff was also happy to give me stickers for my suitcase, which is very much in need of some updates. 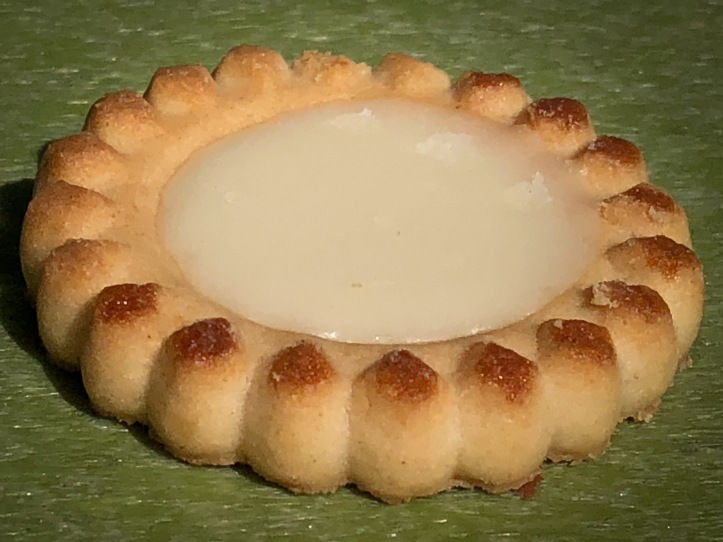 By the time I got to the airport on Sunday afternoon I wasn’t sure I could take one more bite of pie. I may not have mentioned that generally speaking I don’t have much of a sweet tooth. Olives, cheese, salted cashews, capers, crackers, chips and pickles are usually my weakness. But I’d gotten it into my head that this was something of a pie tour.

I wanted one more slice, just for the sake of comparison. The Fort Lauderdale airport did not disappoint, at the Margaritaville Grab-n-go counter. My pie was enclosed in plastic, allowing me to take it onto the plane me. 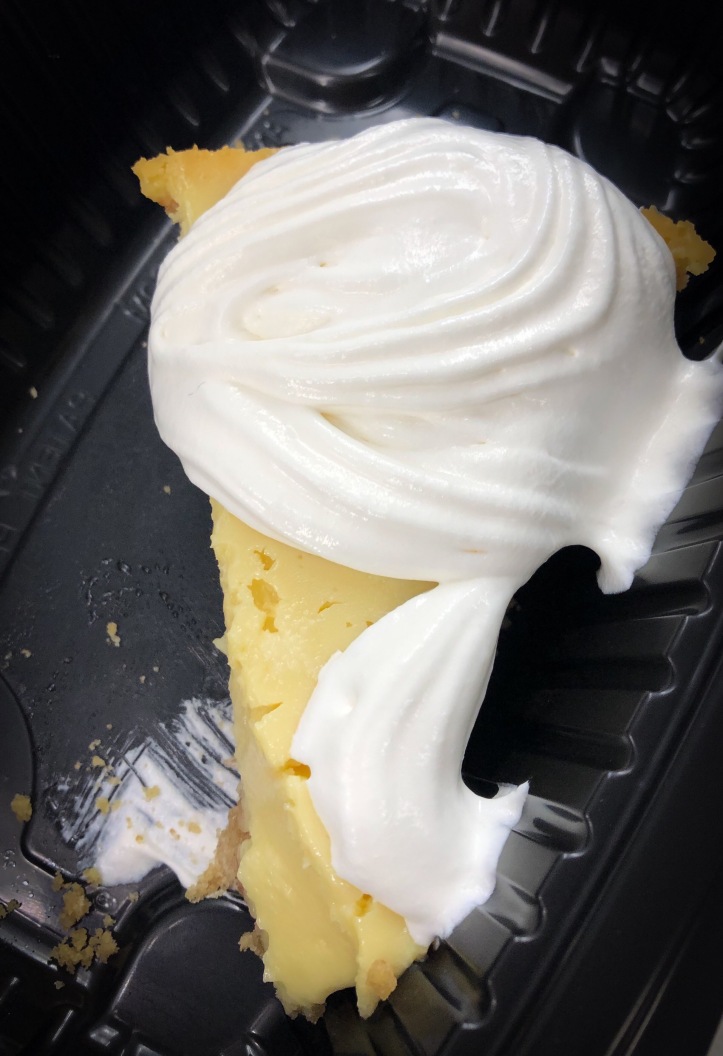 Turbulence prevented the in-flight drink service from beginning promptly. My pie had been out of refrigeration for more than 30 minutes, and I felt my window for eating it was closing. So I got through about ½ of the slice before my instant decaf coffee, stirred up from powdery crystals, arrived. This was a far cry from the Cuban coffee I’d enjoyed the day before, and the pie tasted as though there were at least 4 kinds of sugary ingredient mixed in.

Not sure why I kept eating the pie, despite it being such a letdown by comparison to what I’d already eaten that weekend, I continued to sip the “coffee” that was rapidly getting cold. . . or at least room temperature. 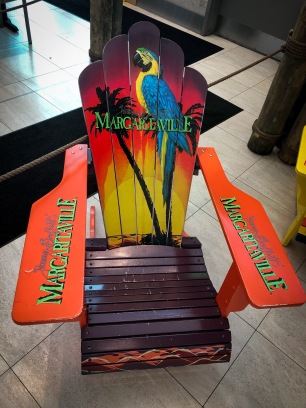 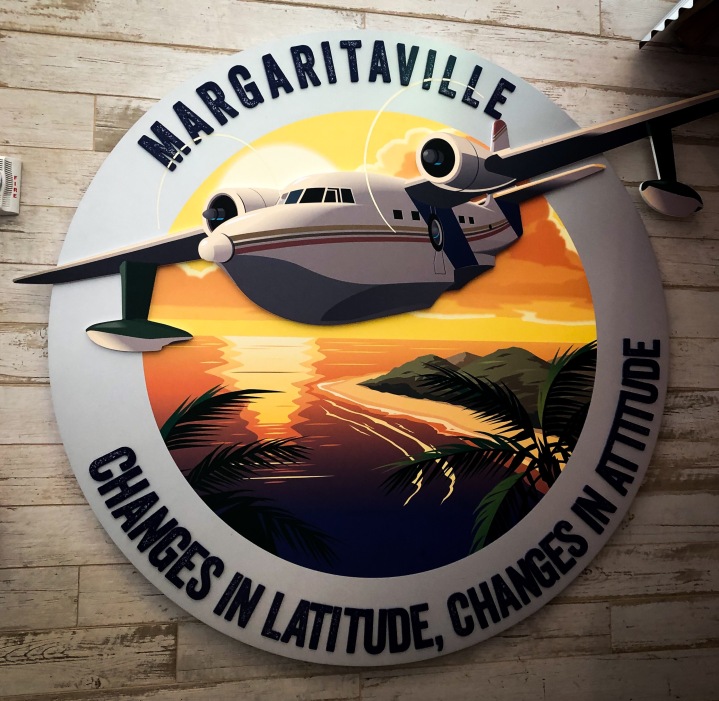 Out of some sort of compulsion (i.e. for the sake of good journalism and an accurate comparison) I ate every bite, even though I was getting a bit jittery, as I realized that I hadn’t exactly eaten lunch, and had been on a high sugar diet all weekend. I felt a bit ill at this point and hoped I hadn’t ruined the Key Lime pie experience for myself. It will be a while before I have my next piece, but the memory of the Blonde Giraffe will bring me back to this signature Key West dessert.