Glancing up, I notice Tibetan prayer flags hanging overhead, in red, white, blue, yellow and green, each color symbolizing one of the elements. Fire and air hang side-by-side, as do wind, water and earth. There’s just enough airflow to set the flags in motion; the movement is created by regulars and first time visitors mingling with wait staff, cooks, dish washers, and cash handlers, in a space not much larger than a galley kitchen.

The flags hang above a cutout in a faux brick wall, where diners are seated at small, round high-top tables. When an order is up, the waitress exits the kitchen, walks past the fish department, with its large tank of live fish, loops back around to the restaurant, and delivers a steaming plate of Momos. The Tibetan dumplings are swimming in a spicy red sauce, and the customers are wearing contented smiles, as they breathe in the scent rising from the bowl.

Beyond these few tables, 5 hungry customers sit at a countertop that faces the restaurant’s prep area. When an order is up, it doesn’t remain on the plate for long. The handmade Himalayan dumplings, stuffed with meat and/or vegetables, disappear rapidly, among satisfied sighs. I tease the cook, as he tosses colorful spices and fresh garlic into a metal mixing bowl, preparing to grill a new batch of bone-in pork. I ask if he’s adding the secret ingredient. He grins, massages the seasonings into the meat, and nods his head with a wink, in playful confirmation.

Everything on the menu is fresh and made from scratch. The restaurant is family owned and operated, with a staff that is friendly, welcoming and jovial – near closing time they raise the volume on the reggae music that lifts the mood of those passing by. It’s a surprise to hear Bob Marley, but the music keeps everyone relaxed and at ease. The house-made, seriously spicy sauce is excitement enough!

“My cooking is home cooking,” says owner Phuntso Lama. I don’t want to give them anything that’s not natural. I like to keep it really simple. Simple, flavorful, and just good for your body.” (Eater)

The restaurant is Momo Ghar. Known for its namesake momos, they also serve a small menu of traditional Napali side dishes, made with ingredients such as lentils, spicy grilled chicken, black-eyed peas and crispy rice.

Opened in May of 2016, Momo Ghar got its start inside of Saraga International Market, on Morse Rd., in northeast Columbus, OH. This happened only after being turned away twice by the downtown North Market, according to a Columbus Dispatch article. Read to the end of this blog post, to discover why this is significant.

I first heard about Momo Ghar last year, on a “Top Ten” list of ethnic restaurants in Columbus, OH that were “not to be missed”. The article was published in one of the city’s local food and entertainment magazines, a trusted source for recommendations, so I aspired to visit all 10!

The restaurant has been featured in Columbus Alive, and was awarded Columbus Monthly’s “Best New Restaurant of 2016”. ABC6 and My Fox 28, Columbus have run stories about Momo Ghar, and ColumbusNavigator.com directs visitors and locals try the momos. Yelp declared Momo Ghar the #1 Place to eat in Columbus, in March of 2017.

Trying to mentally grasp the eatery’s location, somewhere inside the large international market, I had a sketchy memory of the large grocery store itself, from a prior visit, but not the acclaimed food counter. The store was one of several stops on a themed bike ride, put on by local cycling group Yay Bikes! We were visiting several international groceries around Columbus, introducing ourselves to pig feet, quail eggs, jackfruit, Thai basil, and fish sauce. Who would have thought a grocery store could be such an adventure?

One cyclist purchased a live frog from another Asian market, to save its legs from being sautéed in garlic sauce, and ending up on a dinner plate, with a side of steamed rice. That frog was a family pet for 2 ½ years! They had thoughts of setting it free, but since it was not indigenous to Ohio, that was not an option. It was full grown when they rescued it, so it never grew any larger in size – this makes sense, since its intended purpose was to be a culinary ingredient, not a companion animal.

Thinking back, I mentally retraced my steps through the store, remembering sweet Korean candies, fragrant Indian spices, an array of Ramen noodles, and the amazing Mexican bakery, on our way out of the store. Saraga was missing something, back in 2013, when I visited . . . it did not house the tiny restaurant that would bring spicy hot pleasure, wrapped up in little dumplings, to so many Columbus customers.

Momo Ghar had a few more years before it would find its home, and Saraga itself was new to town!

“There were two young brothers . . . who started out by selling products in their truck in Florida, Kentucky, West Virginia, and even remote villages. This was the beginning of Saraga International Grocery. We can never forget a warm meal that an old lady gave them when we went to a small village for selling. From this meal, we were determined to sell grocery and foods that would make people happy.” (Saraga website)

The brothers train their staff to serve customers with kindness first, so the store is enjoyable for everyone who enters, whether it is their first visit or a weekly stop, to pick up kitchen staples. Their aim was to create a happy shopping place for all people, and they have!

The founders wanted to express their motive to serve the basic needs of the community, for the food and goods necessary for living a good life. They named it Saraga, which means “living” in Korean. Saraga has three locations: Bloomington, IN, where the two brothers got their start, in 1994, and two more stores that opened their doors in 2013 – in Indianapolis, IN, and Columbus, OH. (Saraga website)

As you enter the store, you are greeted by a wide array of produce, from all over the world. Many will be unfamiliar in shape, color, texture or size. . . So, that’s what green jackfruit looks like, before it’s packed into the metal can I’m accustomed to purchasing it in, at Trader Joe’s.

Take a stroll through the fish and seafood department, and you’ll discover every conceivable creature from the sea: monkfish, sardines, shrimp, mussels, lobster, scallops, and squid. You can’t ignore the pungent smells that accompany this variety. Look to your left, on your way to the back of the store, and you’ll discover a special, hidden, treat – Momo Ghar!

Except it isn’t so hidden anymore, after less than 2 years of serving the northeast Columbus community. On January 19, 2018 Momo Ghar was experienced first-hand by celebrity Guy Fieri, and featured on his Food Network series Diners, Drive-ins, and Dives.

“One of the biggest highlights of our lives…. Guy Fieri filming our tiny Momo Ghar for Diners, Drive-Ins and Dives!!! Somebody please pinch me. Bless him and his wonderful crew who work so so hard to make magic for small restaurant folks like us. Thank you!!” Phuntso Lama, on FB

Fieri has authored best-selling cookbooks, and opened over 50 restaurants around the world, but much of his celebrity comes from his “in your face” personality, and his discovery of sme very special, hidden gems, like Momo Ghar. He takes viewers along for the ride, in his bright red convertible, and doesn’t shy away from sampling every dish. 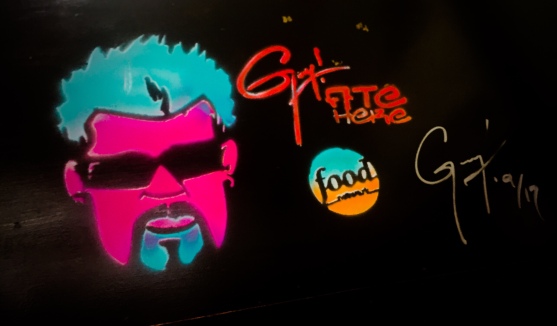 In the episode featuring Momo Ghar, after tasting his first momo, and reveling in the spicy red sauce that the dumplings are drenched in, he declares that there is a problem – there are only 7 left on the plate!

While I’ve never ordered a second round of momos, I’ve been tempted, and would likely not refuse an offer to share three orders with just one friend. Because of the size of the place, and the limited seating, the long line at the register often consists of folks picking up to-go orders.

Phuntso Lama was asked, on Diners, Drive-ins and Dives, how many momos are made each day – over one thousand, she told him, all made by hand. That’s hard to conceive, but I’m glad the restaurant has never run out when I was seated at the counter. 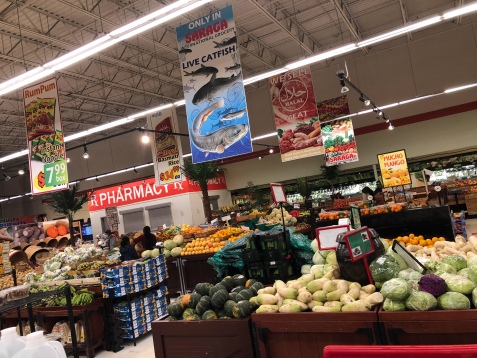 Saraga’s original slogan was “Food from all around the world.” They serve over 10,000 different foods and goods! Their new slogan, “Good Price, Good Products, Good People,” makes it the perfect home for Momo Ghar. It is my sincere hope that they will remain there, just down the road from my home, as they grow and expand, finding great success and filling the bellies of foodies from all over Columbus. 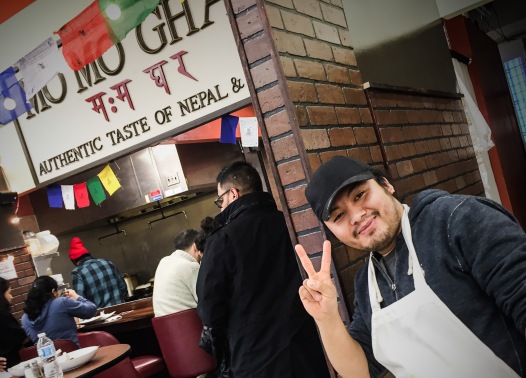 Good news for Columbus: On September 29th, 2017 Momo Gahr opened a second location, at North Market, in downtown Columbus. There was a large crowd in front of the counter, when I visited the market last Saturday morning, so I’d suggest visiting during “off” hours, when there’s a better chance of being first in line.