The forecast calls for cold and snow, but this is NOT a night to sit in my hotel, eating a slice of New York’s famous pizza pie, watching big city news stories, and calling it an early night. It’s Christmastime in Manhattan, and colorful lights are twinkling overhead, from trees, and lampposts, and buildings that disappear as they rise higher, into the evening’s early darkness. Queue gently falling snowflakes. I feel as if I’m in a snow globe, and the feeling is wonderful! 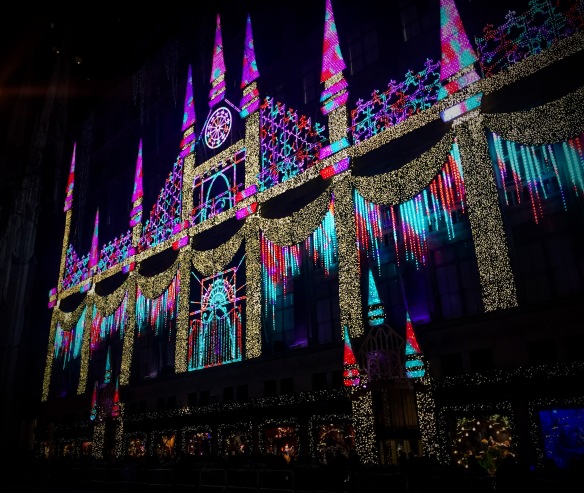 For a month, or longer, much of the city takes on the atmosphere of New York’s famous Times Square. The result is the loss of a sense of time, in this sleepless city. It’s midnight before you know it, and everyone is still out celebrating. Christmas displays are more grand in New York City, with lights so bright that there aren’t as many dark corners or isolated alleyways to get lost in. There are people everywhere! Visitors have exaggerated smiles across their faces, as they anticipate Santa’s impending arrival. 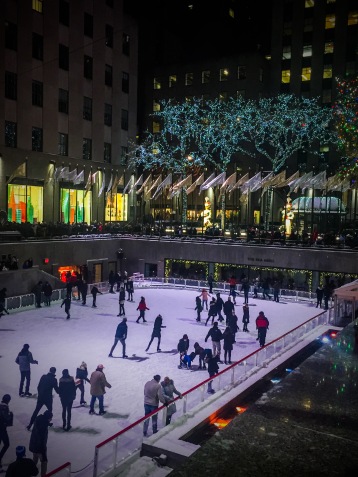 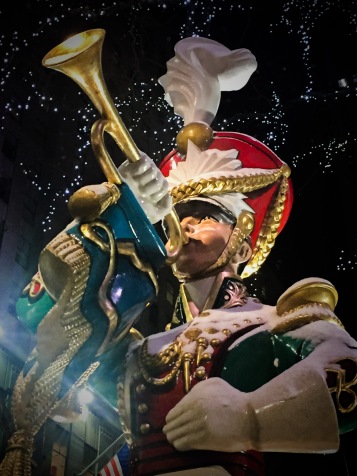 Rockefeller Center has transformed into a winter wonderland! Its ice rink is not overly crowded, thanks to the tightly controlled line of tourists, patiently waiting their turns, for a classic New York experience. The $32 Adult admission + $12 skate rental makes this a bit of an exclusive activity, but walking the streets of Midtown, listening to the overhead holiday music, and catching snowflakes on your tongue, is available to all. Towering soldiers watch out over large families,  romantic couples, skating hand-in-hand, and miniature skaters, whose bursts of energy make me tired, watching from the sidelines. 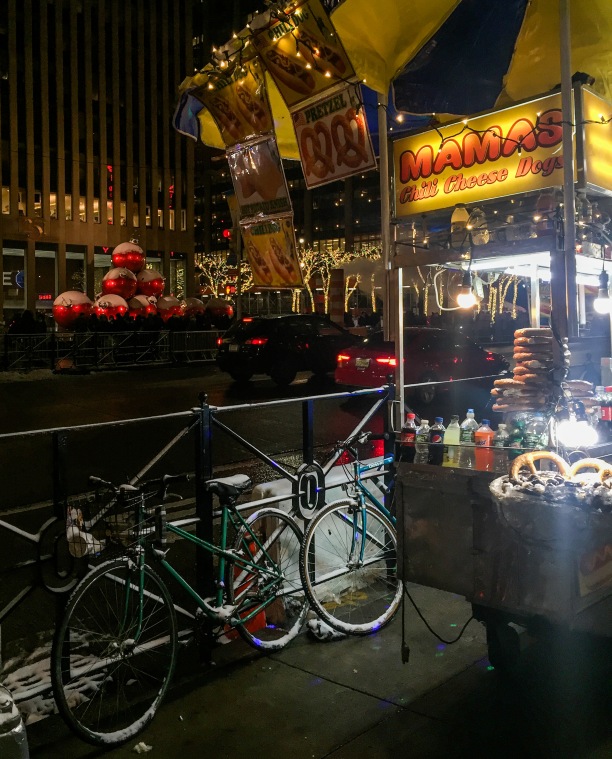 This is New York City, so there are bikes chained to railings, waiting for commuters to return. Three-wheeled pedicabs and bike messengers weave in and out of traffic, fearlessly, not always paying much attention to the direction of the arrows on one-way streets. Chili cheese dogs, warm Bavarian pretzels, and  roasted chestnuts are offered by street vendors. A blast of steam rises up, and the air fills with the scent of hot dog. There’s another satisfied customer.

We alternate between commenting about how lucky we are that it’s such a beautiful night, and stamping our feet to regain feeling in our toes. Many tourists are warming their hands, cupped around a hot cup of chocolate. Just as many have their hands occupied by their cell phones, capturing the music and flashing lights on video, going live on Facebook, and taking expertly practiced selfies. 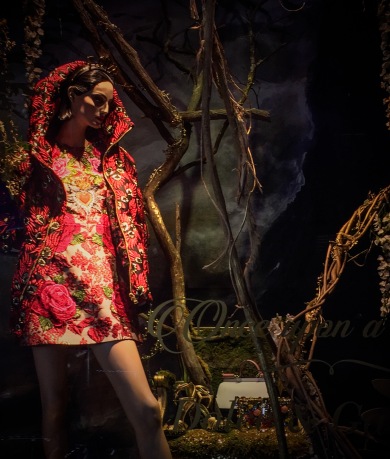 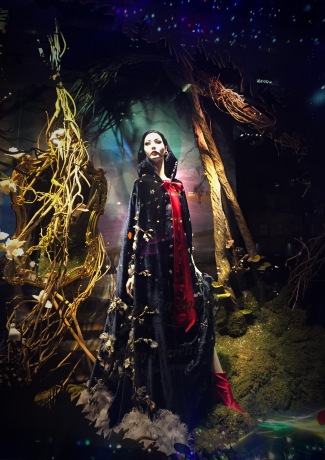 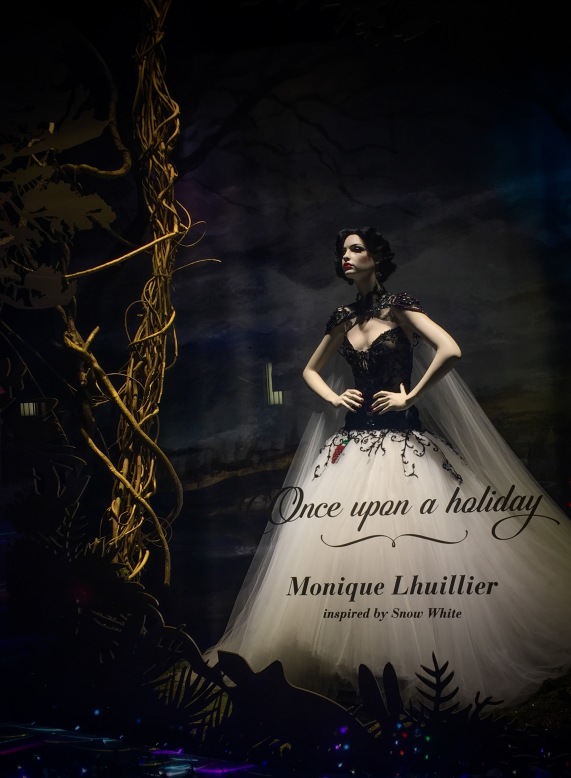 New York is a mecca of fashion, so the designers at Saks Fifth Avenue have some of their most theatrical work on display in the windows, attracting a crowd.  This year’s theme is Snow White, so the animatronics and department store mannequins are dressed in character. The lighted displays and animated characters in the windows are corporately sponsored, but the giggling preteens and wide-eyed children don’t seem to mind. Inside the store, the decorations continue, dazzling shoppers, so they forget about how much money they are spending. 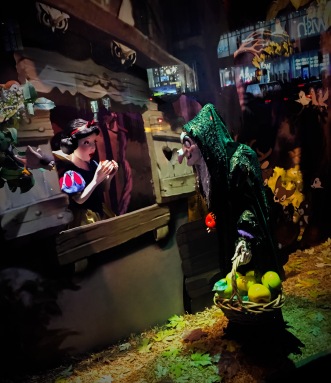 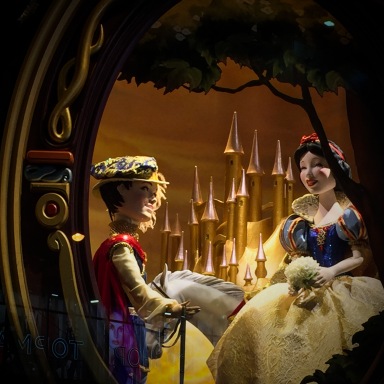 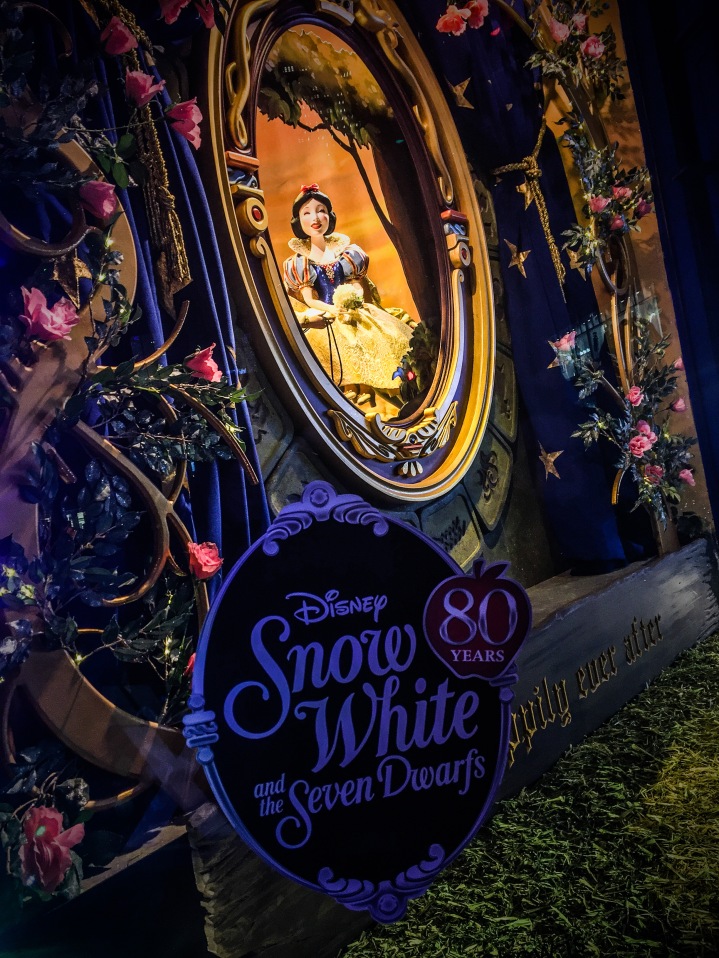 And it would not be Christmas in New York City without the Radio City Rockettes Christmas Spectacular. I was surprised with tickets to the show, and astonished by the pageantry, the skill, and the athleticism of the dancers. The hall itself is transformed, and balcony seats allow me to see the entire stage, the animations projected onto the rounded vault of the ceiling, and the supporting characters that perform skits along the side walls of the hall. It’s stunning! Behind me, the voices of children call out, in excited exclamations. My night is made that much merrier, as a result. 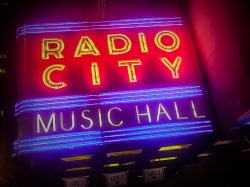 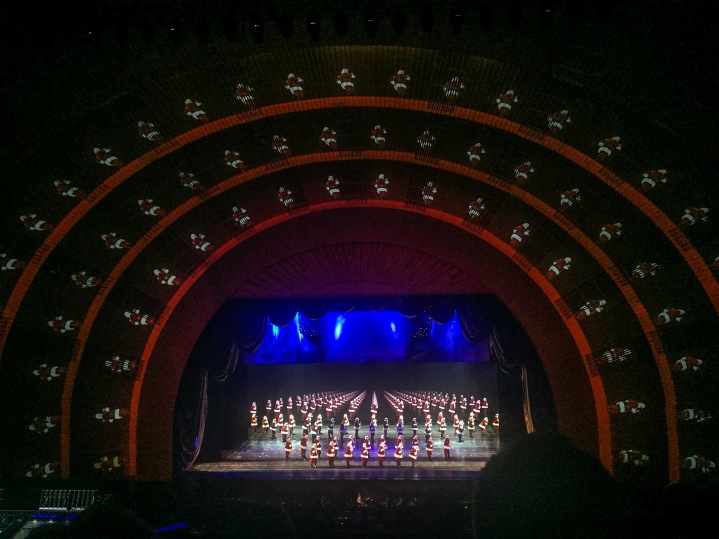 With a Christmas tree that towers so high above the crowd that it’s hard to get its entirety into the frame of your camera, you might suspect you’re in New York City. Snow dusts the tops of oversized red bulb ornaments. I can almost hear Dean Martin. . . 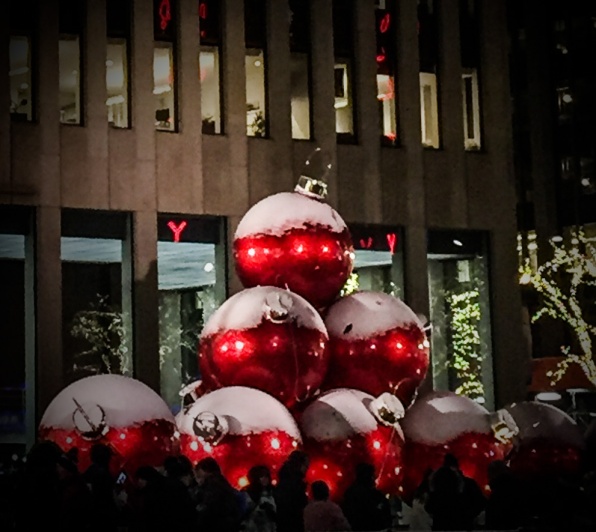 The Rink at Rockerfeller Center: https://therinkatrockcenter.com/