New York City: Living “The Life” by Bike, Under the Cover of Night

Streets buzz with the excitement of New York City’s nightlife, and there’s laughter surrounding you, like the light that spills from electronic billboards, neon marquees and digital screens, looming 8 stories tall.

Quickly, and without realizing what’s happening, with all this stimulation around you, you lose all sense of time. It reminds you of that weekend in Vegas . . . though there wasn’t much you remembered, when you awoke in a haze, still a little but drunk from the night before. You’ll have to stay a little more alert this time. You heard a rumor that this city never sleeps, and you are anxious to find out if it’s true.

You’re in Times Square, and it’s a Beautiful Mess! 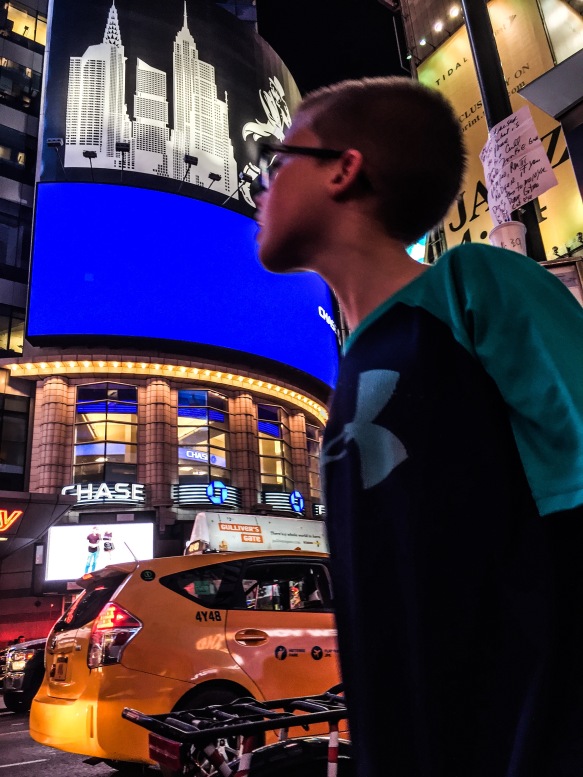 There’s a piercing scream of sirens, as an ambulance rushes past, followed by two fire trucks. A 6’2″ Elmo stands on the corner, and lifts his head off of his shoulders, just long enough to take a puff on his cigarette. A half-dozen young coeds are wearing nothing but body paint and glittery thongs, decorated in stars and stripes, posing for pictures with tourists, who throw them a few bucks. It’s still early (around 11:30 pm?) on a Wednesday night, but the atmosphere is celebratory, like New Year’s Eve. 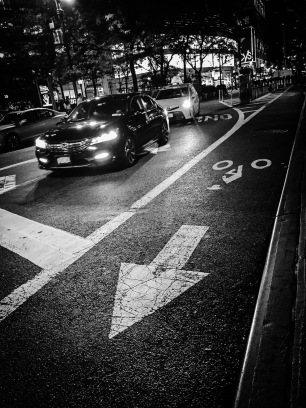 Somehow, a blend of cyclists, motorists, and pedestrians (mostly tourists) make their way around Time Square with very little honking, and only an occasional shout from a taxi driver. Everyone seems to know his place, and you are surprised that you don’t hear the screeching of breaks, or the crash of metal, more than once.

You wander from a steaming hotdog cart to a long line at the corner pizza stand, and from charcoal caricature artist to the spray-paint creator of cityscapes, and dolphins leaping through Saturn’s rings, in the starry night sky.  You notice a slightly rusted commuter bike locked to one leg of the hotdog cart. Down the street, there are at least 10 more bikes chained together in front of a Korean restaurant, and you can hear karaoke blaring from a side entrance, back at the bar. 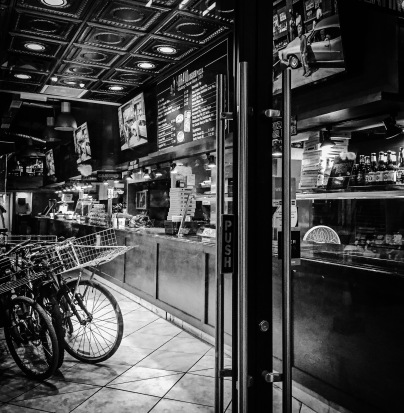 Tired commuters slog their way toward the Port Authority bus station, as pizza delivery guys, with pies stacked 6 high on the bike’s rear rack, zip past them, dangerously close. They aren’t trying to be Jerks, but they have a delivery schedule to stick to, and maneuver effortlessly in and out of traffic. I’m not sure if they are familiar, but New York ran an advertising campaign, through the Department of Transportation (DOT), called “Don’t Be a Jerk”.

“DOT’s Don’t Be A Jerk bike safety campaign humorously highlights the essential dos and don’ts of safe, responsible biking.”  (DOT Website) You’re used to living in a bike-friendly city, like Portland or Columbus, but there are a lot of bikes trying to navigate through the crowds of people, and traffic, downtown.

You hear the ring of a bell, then it repeats, and repeats again, more insistently. You realize that a nearby Pedi Cab is trying to get your attention, thinking you are a weary tourist, in need of assistance seeing the sights. You shake your head, and he targets the elderly couple just a yard or two ahead of you. They have just exited the colorful M&M candy and souvenir store, and are loaded down with heavy packages, full of T-shirts, beach towels, action figures and decorative tins.

The green M&M winks at you, from an animated screen 3 stories up.

A couple of Millennials are chatting over the top of a yellow cab, stuck in traffic, on bikes that cost as much as the driver’s last month’s salary. They have important places to go, but traffic isn’t moving. Traveling by bike, they are doing their part to ease the congestion, but it’s the pedestrians who rule the streets at the moment.

You scratch your head, noticing that you don’t see a lot of bicycle helmets. However, the cyclists whose eye you catch seem friendly, at ease, and confident in traffic. “Safer Cycling is a comprehensive study that analyzes growth of cycling and NYC’s bicycle network, noting that as the number of regular bicyclists has increased, cycling has grown dramatically safer.” (NYC DOT) Perhaps it’s the high visibility of cyclists that promotes safety, and not their lack of headgear.

When you spot a homeless man’s shopping cart, scavenged seat cushions, and umbrella, all stored behind some scaffolding on the street, with cardboard boxes spread out across the sidewalk, you don’t expect to see his bicycle propped there as well. But there it is! He’s living in the big city, and this may be the only transportation he has access to. You hope he takes care of the bike, knows his way around the city, and uses the bike to get the support services he needs, and pull out of his current situation.

There are almost as many Citi Bikes on the road, rented from NYC’s Official Bike Sharing System, with their front headlight flashing, more to alert others than to illuminate the already bright streets. There are no rentable bike helmets, but New York has a great program to get free helmets in the hands of its residents, or onto their heads. (See the New York DOT website for details on how to obtain a free helmet.)

Also serving the community is an organization called Recycle-A-Bicycle, which impacts city youth, teaching them the skills of a bicycle mechanic.

Recycle-A-Bicycle Makes a Difference: “Recycle-A-Bicycle has been dedicated to the health, development, stewardship, and empowerment of NYC youth for more than 20 years. In the past year alone, more than 1,000 RAB youth collectively refurbished 500 bicycles, pedaled 24,000 miles, and burned 1,750,000 calories. On average, RAB salvaged 1,800 bicycles each year from the waste stream, diverting a total of 45,000 pounds of waste from NYC’s landfills.” (Recycle-A-Bicycle website) 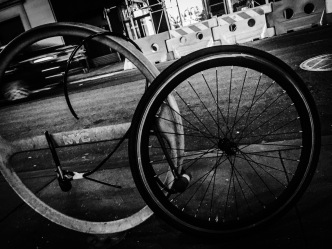 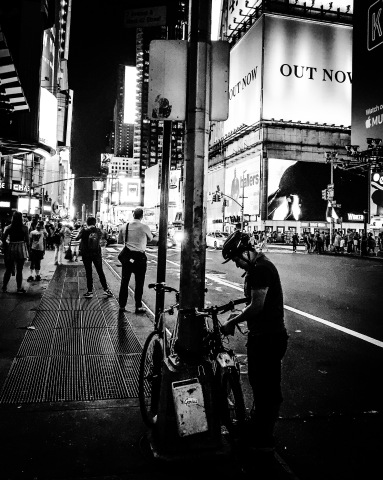 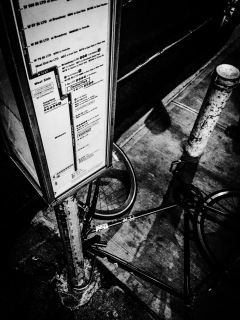 You’re happy to wander the streets, and do so for hours on end, finally making it ot the top of the Empire State Building, to take in the view. . . but you really wish you were down there on a bicycle of your own.

“Don’t be a Jerk”: http://www.nyc.gov/html/dot/html/bicyclists/dontbeajerk.shtml