After just a few minutes of exploration, I noticed the eerie smell of gun powder, and burning wood, being pumped into the room, heightening the realism of the battle being narrated overhead. The movements of the Union and Confederate soldiers were brought to life, recreated in LED points of light, moving over a massive fiberglass relief map, in the visitor’s center, at the site of Manassas Battle Ground.

I’d had a late start, on the way out of the nation’s capital, because there is so much to see on the outskirts of Washington, D.C., where I’d snagged a modest hotel for the night, just a few miles from the end of the Metro line. The Science March had taken center stage the day before, despite the constant rain, but it was time to explore the surrounding area.

Manassas Battle Ground, part of the National Parks Service, could have been a destination for the entire day, but I had my sights set on Shenandoah National Park. I’d planned nothing more than a quick drive past the battlefield, stopping just long enough to warrant a stamp in the National Parks Passport. The sun was trying hard to burn through the overcast sky, but the damp earth, the clouds moving slowly across the sky, and the sound of a nearby gun range put the significance of the site into perspective. 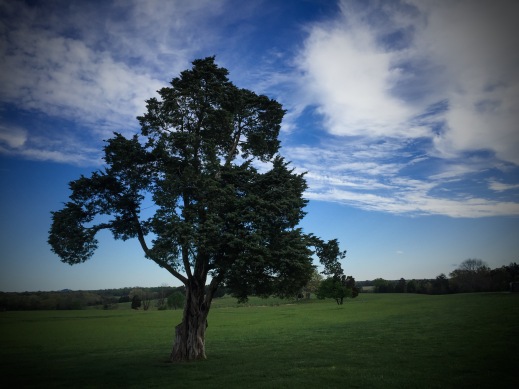 There’s so much historic significance the Eastern part of the country. For better or for worse, the political climate that surrounds us today has its roots right here. The powerful impact of this is not lost on me. Just the day before I’d exercised my rights to peaceful demonstration, congregation, and free speech. I’d marched for what I believed in, held up posters that declared my confidence in the scientific community, and counted on the power of intellect to “know better” than to be driven my ignorance, to think things through, and to fight for what is right for this country.

I walked among historical markers, reading the stories of conflict, wondering what it could have been like to stand in this place, so long ago. I was struck by the effort that goes into preserving such places. The National Parks Service has been under threat as of late, and I’m fearful that our country will lose perspective, if the parks retreat under aggressive development and commercialism. I picked up a brochure, dedicated to preserving the native grasslands, and wondered if future generations will have the chance to experience this striking place. 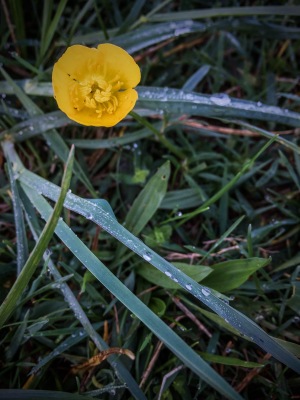 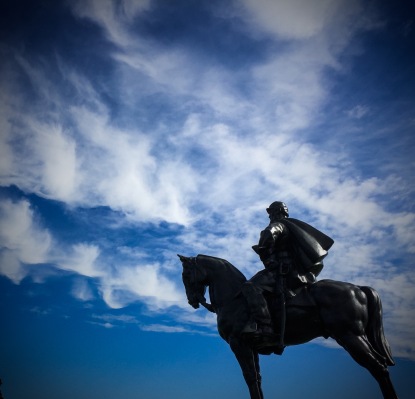 Petite yellow flowers scattered across the lawn, making a springtime appearance, in grass that would soon be mowed into paths to guide visitors. It was only 30 minutes after the visitor center opened for the day, and there were almost a dozen cars in the parking lot. I had time to do a quick tour of the main battlefield, acquire a stamp in the official National Parks Service passport, and check out the displays in the education center.

It was tempting to linger, but there were other National Parks demanding attention. On this day, the streets of Shenandoah National Park were being closed to cars, for one day only, for “Ride the Drive”, opening 30 miles of Skyline Drive exclusively to bikes, rollerblades and foot traffic. The Fargo (my borrowed mountain bike) was strapped to the back of the Subaru, and I was ready to ride!

I’d been cautioned by fellow cyclists, about the first five miles of the road that leads into the National Park, because of its long, continuous incline. I won’t pretend that I wasn’t intimidated by the 1670 feet of elevation I aimed to climb, in just five miles. But I knew I needed to do some training, for an even more challenging gravel ride, in Montana’s Glacier National Park, scheduled for this June. 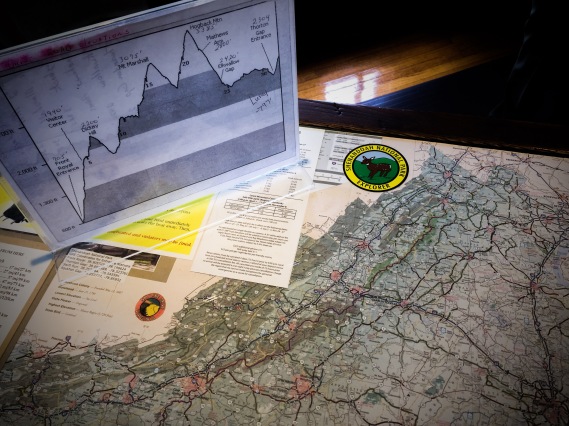 Aside: There was one more brief stop on the way to Shenandoah National Park, because who can drive past a sign on the side of the road, advertising house-made donuts?. . . . The Apple House! We made a quick stop, but held back, indulging in just one Apple Butter Cinnamon Donut, to accompany a very large,hot cup of coffee. I had some climbing to do, after all! The burst of sugar might help, along with the accompanying caffeine but I couldn’t risk weighing myself down with 1/2 a dozen of the sweet treats that dissolved as soon as they were in your mouth.

Once inside the park, it was time to get started, and I immediately encountered that first (loooooong) climb! The only thing to do was to put it in “Granny Gear”, and just keep pedaling. The advantage of the slow climb is that you get to see, hear, smell and really experience this wilderness at a slower, more intimate, pace.

All along the road I saw patches of dogwood, hugging the forest floor, signaling springtime. The forest was in bloom, with green leaves competing for sunshine, and small shoots breaking through the thick, brown layer of last year’s fallen leaves. The hill climbing meant my slow progress was accompanied by a frequent need to stop and catch my breath.

When I stopped my bike, kept still, and closed my eyes, I heard water falling, and then burbling down rocky streams. My late start to the day meant that there were few cyclists moving in my direction. Instead, they flew by in the opposite direction, on their return trip, hunched over their handle bars to cut down on the wind resistance, and enjoying their rapid descent.

To my excitement, I was 4 miles into my ride, when I noticed evidence of bears. 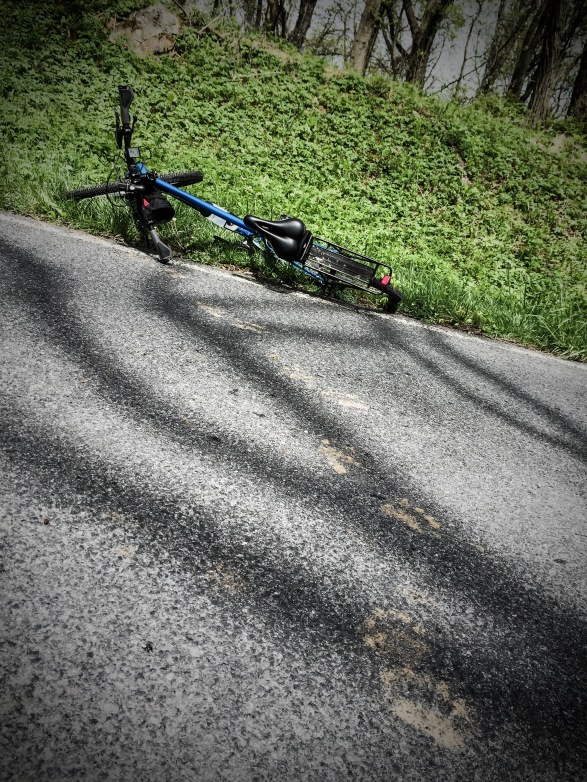 If I had zipped by in my car, hurrying from one overlook to the next, I would never have seen the muddy footprints, cutting diagonally across the 2-lane road. I quickly swung my bike around, in a shallow U-turn, to have a closer look. If the road had been open to the usual Sunday traffic, had cars been in the park since early morning, the prints may not have even been there at all!

Wildlife is self-trained to keep away from the dangers of the road, contrary to what Yogi and Boo Boo might make you think, as they are seen searching for picnic baskets, in Jellystone National Park. Simple survival of the fittest ensures the resident bears know a thing or two about how to avoid being struck by “eager beaver motorists” trying to get into the Park.

At my turnaround point, the visitor center, there was a handwritten log of wildlife sightings, and every couple of days someone reported a bear sighting! I was disappointed, and simultaneously blessed, to only see the muddied tracks in the road, and not their source. I couldn’t be entirely sure whether the tracks belonged to a black bear, a grizzly, a bear in a hat a tie, clinging to a “pic-a-nic basket”, or a mischievous 12-year-old, with a pair of bear claw boots, trying hard to fool naïve tourists looking for fresh blog material. 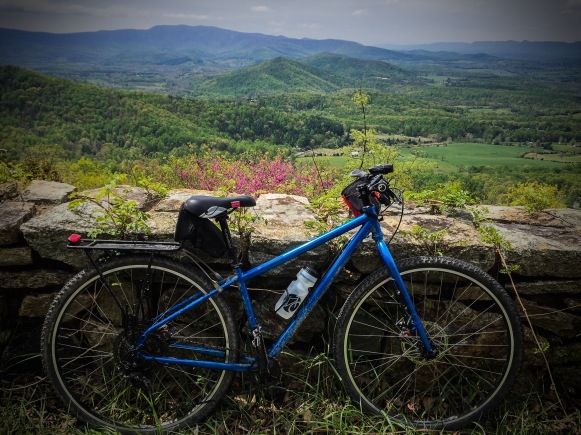 Riders refueled with trail mix and beef jerky at the visitor center. They bought stickers and postcards that document their participation, and took advantage of the “Comfort Station,” to empty their bladders. Groups of riders stretched out on the grass, relaxing and taking in the view. They checked maps, deciding whether to continue on for a few more miles, or throw on a few extra layers, for the chilly downhill trip back to the car.

A novice couple, with him on a hybrid and she on a “comfort bike”, was riding at a bit of a slower pace. The woman was lagging behind, but steadily pedaling in her low gears, as I had been. She made gradual progress, and was able to carry on a cheerful conversation as I passed on her left. I passed her at least 3 or 4 times, as each of us would stop and take breaks, to catch our breath, catch our riding partners, or catch a glimpse of the vast and beautiful landscape.

As we were leaving the rest stop, pushing bikes away from the bench we’d been picnicking on, another pair of riders was arriving. They had just finished the same 5 mile climb that we had. We offered them our bench. “Oh, thank God!” one exclaimed, “Did you hear us coming, huffin’ and puffin’ up that hill?” 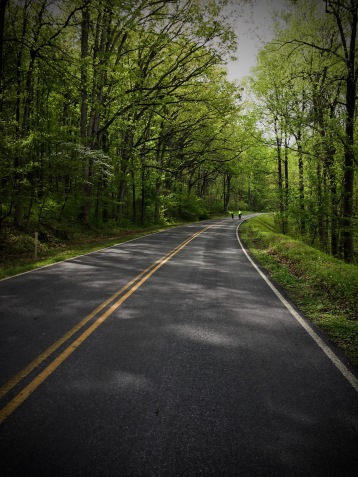 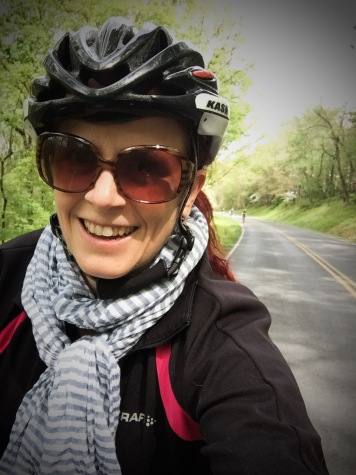 On the way back down the hill, I felt like a member of one of the groups of riders in full cycling “kits”, straddling sleek road bikes that probably had them coasting close to 50 mph, or twice the posted speed limit.

One rider was wearing the official National Parks bike jersey for Glacier National Park, on Montana. I asked if he’d ridden in the park; he had not, but has big plans to do a 250 mile, 5-day ride there this summer. I shared my own plans to take the train from Chicago to Glacier in late June, do some bike camping, ride 30-40 miles per day, and squeeze in a bit of hiking or kayaking. I can’t wait!

The Shenandoah ride was a training ride for Glacier, a test of hill climbing stamina. I was grateful that the park was reserved for cyclists, of all abilities, styles and backgrounds, on this day. Riding as much as I can in the upcoming months, to increase my overall physical fitness, will do more to prepare me, both physically and mentally. Achieving the climb in Shenandoah was simply a confidence booster, convincing me that I could handle a sustained climb.

But a day like this does not happen without support! There were park rangers and volunteers on hand, staffing the visitor centers and admission booths, as well as monitoring parking at the Skyline High School. Motorized traffic was directed away from the park entrance, outside of the park boundaries. 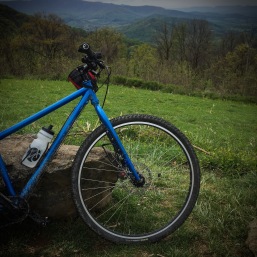 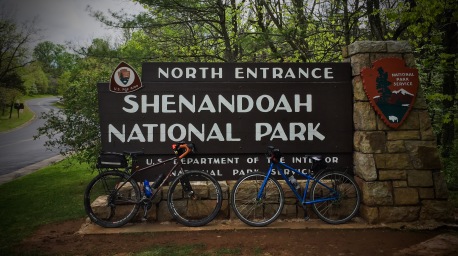 “Ride the Drive” was advertised as a Car-Free Day in Shenandoah National Park, Skyline Dr. It was part of National Park Week, and “a pilot event to promote opportunities for alternate modes of transportation and recreation, promote health and well-being, and enhance the visitor experience by providing an opportunity to access the Park in a unique way.” (press release)

The volunteers seemed so happy to see us, upon our return to the parking area. They asked about our ride, and joyfully welcomed us back. We told them we rode for around 1 hour and 20 minutes up the continuous incline, just over 6 miles, just past the first visitor center’s beautiful overlooks. The return trip was completed at speeds that broke the park’s posted speed limit, in about 10 minutes.

On the drive home, I witnessed a bright orange, pink and purple sunset, glowing from within like a neon sign. It was one of those sights that changes, just a little bit, every time you glance away and then back, at the slowly moving clouds and sinking sun. There was enough daylight left for one last stop, and one last stamp in the National Parks passport, on the way back to Columbus.

In Cumberland, MD, although the Park Office had already closed down for the day, I convinced them to let us in for just a few moments. The volunteers were closing up shop, and had already advanced the official stamp for the C & O Canal, to display the next day’s date. That’s okay! 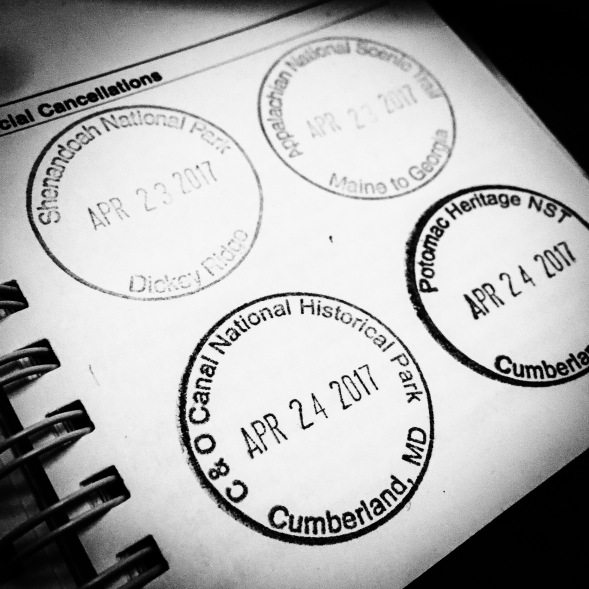 The passport is just fun and games, anyway, except for those folks who grant it more significance. I might know someone like that! In either case, the passport inspires adventure, and there isn’t a thing wrong with that!