More to Spain than Sangria & Paella, but Friends are Glad for Those!

What is it about Barcelona? You get a vibe there, one that whispers “Be you! Live life!”

Gina had always wanted to go to Spain. She’d lived in Europe for 5 years, but had never made it to Spain, because she was always going to France! 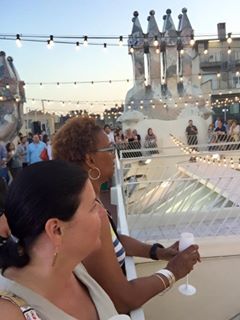 A friend from high school had a place in Spain, just outside of Barcelona. He offered up his home for a visit. He was a close childhood friend. . . Gina, who is from the Smith clan, calls her friend a “Semi-Smith”, because he spent so much time with her family, in younger days.

It was Gina’s 60th birthday, and Spain is where her heart wanted to go! 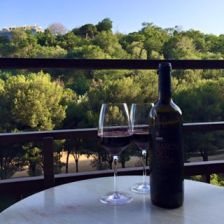 In Barcelona, seafood is the thing! It’s what you eat! It’s all around, and easily accessible. It’s hard to avoid, if someone had a good reason to do such a thing! Gina’s traveling companion, Teresa, is. . . well, not a fan of seafood. But, when a dozen close girlfriends gather, to try out some Spanish recipes, share their travel stories & dreams, and drink a bit of sangria, she was willing to give it a try!

“There’s a shrimp on your plate? Is it in your mouth?”

While Gina was preparing the lobster tail, destined for paella, I was busy watching her technique, and trying to learn a thing or too. I confessed that I wasn’t entirely sure I had ever eaten an actual lobster tail. I’d certainly never removed, or witnessed the removal of, the lobster meat. . . from its tail. Gina glanced over her shoulder at me, saying “You’re such a Midwesterner.”

Well, I’ve spent a lot of years landlocked, traveling all around Wisconsin, Illinois, Indiana, Ohio, Michigan, Pennsylvania, West Virginia. . . . Okay, I’ll admit that for a long time I’ve been landlocked! But now my territory is the East Region. The east coast is calling my name, and there are a lot of adventures to be had out there!

That’s all well and good, but an international adventure – well, that’s something to write home about! Gina and Teresa went to Spain for 2 weeks, at the end of June 2016. The weather was Beautiful; they had plenty of sunshine! There was no shortage of beach time! 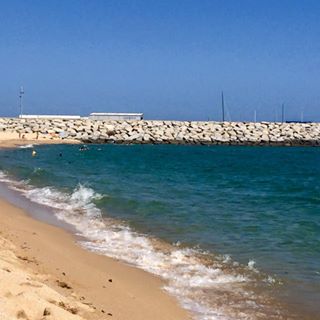 Their 1st week was spent in the city of Barcelona, with a token amount of time spend with the sand between their toes. There was sightseeing to do. The 2nd week was different. Gina and Teresa headed up the coast, where the beaches weren’t as crowded, and there was ample time to relax, each and every day. Ahhhhhhh! That’s a vacation! That’s a getaway! They were in Arenys de Mar, where the “clothing optional” vibe was enticing. Did you know how freeing it is to go topless in the water? It feels so good! Or so I’m told. . .

But, let’s talk about the food! What stands out? Well, the food is fresh! When you buy at the local market the vendors ask you when you are going to eat it, so they can select the appropriate produce, meats and other ingredients to ensure that your meal is fresh, flavorful, and memorable! 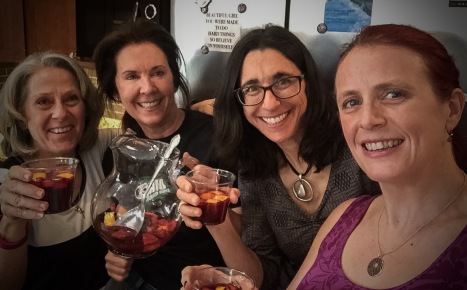 Gathering their friends together, for an afternoon of cooking and storytelling, Gina and Teresa attempted to bring those memories to life once again!

“Tomato bread is served!” Gina calls out to the group, to get things started. There are already Spanish olives, blanched almonds, and fruity sangria on the table. We’re told that that in Spain there was tomato bread brought to the table as soon as you sat down, at every restaurant they went to for dinner. Some restaurants came to the table with the toasted bread, and smashed the tomato and garlic into the thick slices right there at the table.

Spanish restaurants make it seem easier than it is; sometimes things get out of hand, or you just get caught up in conversation, and the crust burns!

There was fresh food all around, wherever Gina and Teresa went in Spain! They found themselves noshing all day long, a little bit here and a little bit there, keeping their metabolisms going. Combined with the smaller portions served overseas, and all the walking they did, there was no concern about returning from vacation with extra “baggage”.

At our Spanish dinner there were vegetarians and carnivores, and many who land somewhere in-between. Much of the food was purchased from Whole Foods, which is respected for its real food, but not always beloved for its prices. (But if you think about it, sustainable, responsible and humane farming is a costly endeavor, so the higher prices are to be expected, and applauded.) Other ingredients came from one of the international markets in town. 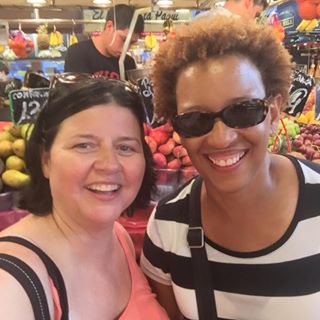 This group had gathered before. They had purchased many ingredients the international market, for their Moroccan dinner, as well as their attempt to keep up with the fast pace of Thai cooking. There are talks of a future Cuban meal!

Throughout the entire process of shopping, preparing, cooking and breaking bread with friends, there were stories to be shared! There were stories of quiet relaxation, and getting away from it all. There were accounts of new adventures, and moments of throwing caution to the wind. There were tales of nude beaches, and all manner of foreign customs.

As the afternoon wore on, latecomers trickled in, and jumped right into the action. Some poured a glass of wine, and watched the action, in appreciation that it was all coming together. 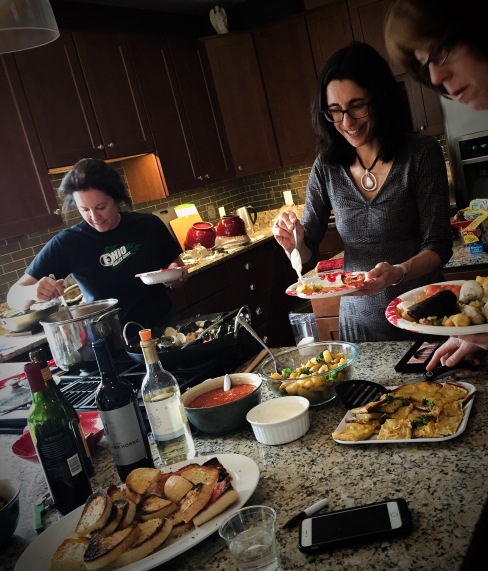 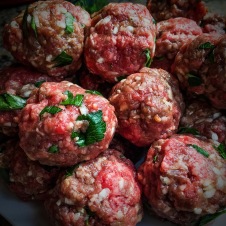 Vacation photos scrolled by on the large screen TV in the living room, while the volume in the room climbed, and the air filled with laughter and sudden, unexpected exclamations! This isn’t anything like the dreadful tradition of spending hours sifting through slide after slide (after slide) of your dear, sweet great aunt’s road trip to California, 20 years ago.

This is friendship! This is community! This interaction is kind of amazing, in a world that hardly takes a moment to connect, in person, face-to-face. It takes a unique group to embrace this kind of interaction. Truth be told, most of the women in attendance would probably welcome a chance to connect with their dear, sweet great aunt, and would listen with keen attention, and compassion, as she told the same story for the 32nd time. That aunt might have some real adventures, and stories that are a bit shocking, for their time. You’ll never know if you don’t give her a chance to tell them. 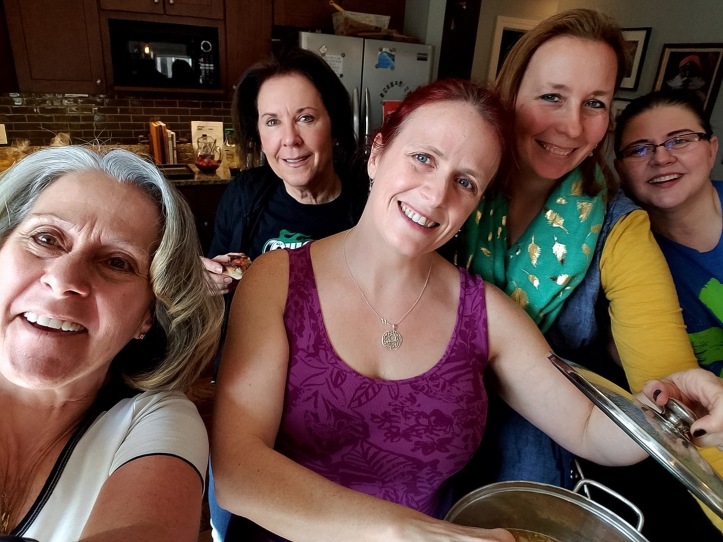 I can’t imagine what someone walking by would have thought of this gathering, with 5 – 6 conversations going on at the same time. What did we have to talk about? Well, Spain, of course. There was talk of cooking expertise – who had it and who was seeking it! A passion for travel came up in conversation, again and again. It turns out that Gina and Teresa aren’t alone in their passion for experiencing other cultures.

Spin class, circuit training and running efforts were discussed, as well as one cyclist’s recent purchase of a new bike. Most in attendance know that the perfect # of bikes to own is n + 1, with n representing the number of bikes that you currently own. (We’re the sort of folks who might have a room dedicated to our bikes. . . and yoga mats . . . and hand weights. It’s a good crew to be around!)

The conversation eventually turned to world politics, and differences between the various cultures we’ve visited (including Africa, Thailand, and most of South America). When you’re part of a community like this one, among good friends, the conversation can get pretty serious, pretty deep, pretty meaningful, and that’s Okay, in spite of differences in beliefs.

In the end, this virtual trip to Spain centered around two trusted friends. 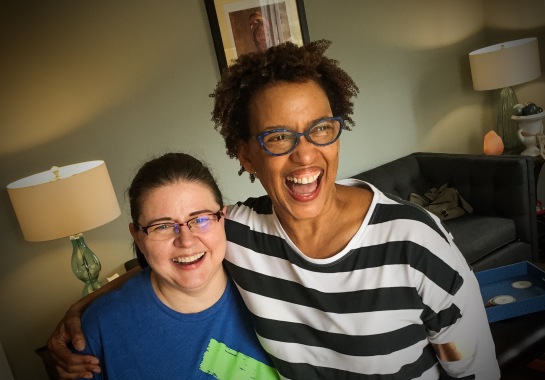 How did these dear friends meet? Their meeting was an example of how cyclists often look out for one another. Teresa was part of a walking group that was hanging out, drinking coffee after a walk. Group members, who were also cyclists, were talking about riding together, because the weather had broken, and it was just too nice out to stay inside.

Teresa was relatively new to riding. Like any new rider, she didn’t fully grasp the different levels of cyclist, and knew little about the vast differences in riding ability. When she joined in, and the more experienced riders pulled away, stretching their legs and pushing their road bikes to see what they were made of, Gina stayed back with the new rider.

This is a cyclist’s mentality, at least on a “no drop” ride. Not knowing precisely where they were, some improvisation was needed. Gina recognized one of the streets they came across, and knew she could get them back to where they started the ride. They made their way back, with Gina offering her new friend some much needed hydration. Something had clicked, and a friendship was born. 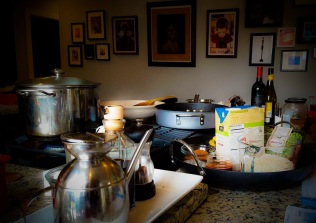 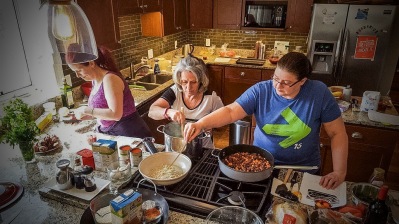 When Gina said she wanted to go to Spain Teresa didn’t hesitate. Getting from place to place is ½ of the adventure, when it comes to international travel. From Columbus, OH they flew through JFK and on to Barcelona. On the return trip, there was a flight through Madrid, and there was also a bit of a mix-up about the timing of the flights. 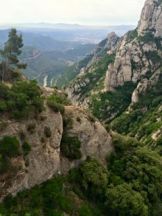 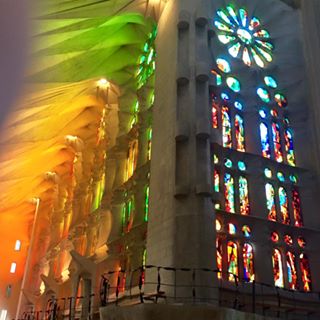 They had planned to take the train to the airport, since they had late morning flights, heading out at 10:00 am. But it turned out that Teresa’s flight actually left at 8:00 am. They had to hire a costly taxi to get them to the airport on time. They did make it to the airport on time, but the ride was a bit harrowing! With the driver rapidly navigating the narrow streets, streets it didn’t appear that his vehicle had a chance of squeezing down, they made their way to the local airport. It was a miracle that they made it there safely, at least from the perspective of a passenger.

What they left behind, when they departed, was the hospitality of their hosts, who have reached out, asking when they play to return. As they headed out, their bags exited the residence by way of the 6th floor balcony, rather than being lugged down the 64 steps from their room to the front door. There were exactly 64 steps – Gina counted them every time she walked up them. Teresa was quick to remark: “Our asses are gonna look great after this trip!!” The bags were lowered to the ground by rope, from the balcony, straight down to street level.

Unique memories were created, and I suspect these two will be back. Perhaps they will have the opportunity to bring their bikes along next time!

(Thanks to Terri and Donna, as well as Gina and Teresa, for contributing photos to this post.)