Escaping from Today: Reconnecting with the Natural World, and a Far Distant Past

There’s been so much focus on this particular moment, and what is happening in the political world today. I couldn’t possibly ignore it, or let it pass by without comment. This travel & adventure blog, directed by my work travel and fueled by my growing wanderlust, is a creative outlet and an attempt to take others along on my adventures. In this way, it is a source of entertainment. As a writer, “Accidental Wanderlust” has also been a place of reflection, connection with my past, and daydreams of the future.

Right now I’m looking for a way to gain some perspective. Although I travel all over the country, and internationally when I can, I take “home” with me. Sometimes I carry a lot of baggage. Sometimes it’s a load that I struggle to handle solo. I experience growth with every new encounter, every challenge I face, and every moment of wonder. Sometimes there are growing pains, and that’s Okay.

Today I am saddened that a hateful man, who I would not want to introduce my young niece to, will be guiding our nation, and making important decisions about the future of our great country.

Of course moral issues divide many of us. I spent over a decade immersed in philosophical journals and engaging in philosophical exploration, as an undergraduate and  then graduate student studying the Philosophy of Psychology & Mind. As a Teaching Assistant and Lecturer I welcomed the chance to instruct at the college level. Time and time again I invited young undergraduates at The Ohio State University to consider their beliefs, question what supported their guiding principles, and fashion stronger, more rational arguments.

These undergraduates never knew where I stood on the topics we discussed – whether it was animal rights, affirmative action, or abortion. That wasn’t the point. Sometimes they pushed me to reveal my personal stance, but what I was teaching them was to look at the arguments objectively. I demanded that they put aside the views they held “just because” they had been passed down from a previous generation. In the end, many left my class with the same views they arrived with, but they stood on firmer ground, having given their views real, sustained consideration.

I helped these students open their eyes; I prompted them to really think. It’s my hope that this week many more eyes have been opened.

As it turns out, the world is bigger than just this moment. There is so much going on outside of today, and the here and now. The bigger picture needs to be remembered. I had the opportunity last week to get away from the news coverage, putting the TV, the computer and the newspapers aside.

I explored a quite spot in New Mexico that encouraged reflection, as I took the time to slow down. Everything may have seemed calm, even desolate, and perhaps a bit mundane, to the casual eye . . . until you stood still long enough to really look. Quieting your mind and breathing in the scents, “listening” with your ears and you heart, you can almost “see” another world.

This place was bathed in soothing earth tones. It was unexpectedly quiet, and simultaneously teeming with life. Our National Parks System recognizes the importance of this place, and stopped the progression of suburban housing developments and strip malls from swallowing it up. The Petroglyph National Monument is an oasis, and it provides a window into the past.  The petroglyphs reveal a primitive form of communication, and a way to express new ideas, beyond this moment.

You didn’t see them right away, but as the petroglyphs started appearing along the trail, and up in the hills, you realized you were not really alone. The sky was overcast, creating a silky, soft light. The cloud cover muted the charcoal, terra cotta and muddy colors of the landscape, but it had rained, which somehow brought the environment to life. Birds were all around. They were small and bouncing about, large and soaring through the sky. You could stare intently at a section of the brush right in front of you, and suddenly it would come to life. It would start to shift, branches rustling and the dirt beneath it disturbed. 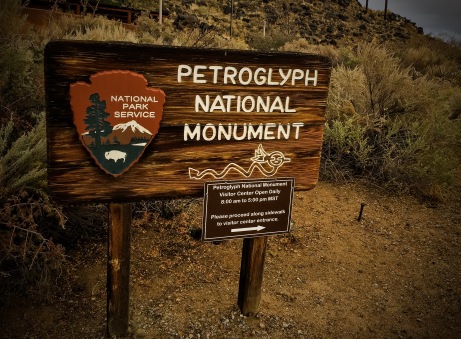 Further off, on the rocks, a long-eared hare looked over its shoulder at me, pausing to consider my raised camera for a minute. Deciding that I was not a threat, it lifted a leg to scratch that spot on its right shoulder, the one that’s so hard to reach. He wasn’t bothered by me, and scratched away until he grew bored, and hopped away.

“Petroglyph National Monument protects one of the largest petroglyph sites in North America, featuring designs and symbols carved onto volcanic rocks by Native Americans and Spanish settlers 400 to 700 years ago. These images are a valuable record of cultural expression and hold profound spiritual significance for contemporary Native Americans and for the descendants of the early Spanish settlers.” (National Parks website)

We’ve come a long way since these symbols were created. It’s kind of amazing to imagine someone standing in that very spot 700 years ago, making her mark. Signs at the park’s visitor center warn against touching the rocks, which would cause damage and deterioration. This was difficult for me, as I was drawn to the markings, wanting to connect to that history. I refrained, and captured images instead.

History came alive, just as the landscape had. I felt part of something much, much larger than myself, my neighborhood, or my country. I felt a timeless sense of community and connection. I felt better there than I have in a while. I was excitedly making my way along the trail, climbing rocks and navigating sandy paths.  With my camera in hand, I was seeing these rocks as more than just rocks. The men and women behind these symbols had something to say, and used their creativity to express themselves.

I’d found the perspective I was seeking. My travels will take me to many more “foreign” places. I welcome that, and I will continue to grow with every trip, and every new experience. So much change is happening in my home country right now, but in a way it points to what was already there, but hidden, much like the wildlife hiding amongst volcanic rock in the desert of New Mexico.