Building Empires on the Other Side of the Tracks: 28 Hours with Amtrak

Note: Text for this post is by Kathleen O’Dowd; guest Photographer Craig Clark, with postproduction work by Kathleen. 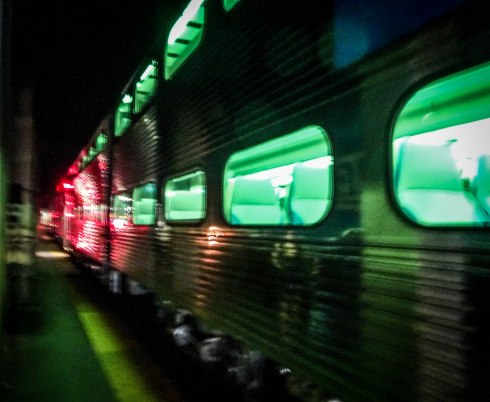 There’s a thick cloud of dust, kicked up by the train. We’re halfway through a dark tunnel when the conductor announces that it’s the longest along our route, until we reach Glacier National Park. I’m fascinated by seeing into the backyards of the homes were glide past, glimpsing how folks from Illinois, to Minnesota, and from Montana to Oregon really live. It’s a snapshot of America, seen only by train.

Amtrak’s Empire Builder moves at a pace that is fast enough to move you across the country without needing a two-week vacation; it moves slow enough that you have a minute to reflect on the lives of those around you, whether they are sitting in the reclining coach seat across the aisle from you, or live in that small town that you’ve never been to before, on the other side of the tracks.

Despite the ubiquitosness of automobile travel in the past several decades, there are so many stories in modern culture that take place in, on and around trains. Train travel is romanticized, as we are entertained and inspired by the railroad. From Dumbo’s circus train to the Polar Express, the mystical world of Harry Potter to the comedic timing of Silver Streak, we are a train spotting society. You might worry about ending up on a Runaway Train, or anticipate adventure amongst Strangers on a Train. The Great Train Robbery doesn’t happen every day, nor does Murder on the Orient Express, but train culture takes a leading role in Wes Anderson’s The Darjeeling Limited, and gives structure to the coming of age tale that is Stand by Me.

There’s a sign on the second floor of the coach car that reads: “Reserved for parties of 2 (or more)”. Passengers traveling alone are directed to move to another section of the train, to make room for families to sit together. The solo passengers are encouraged to “Make a friend!” Get yourself to Chicago, climb aboard the Empire Builder, headed West, and you’re on your way! If you’re in it for the long haul, the train follows this route: Chicago – St. Paul/Minneapolis – Spokane – Portland/Seattle.

“Experience the Rugged Splendor of the American West: Traveling daily between Chicago and the Pacific Northwest along major portions of the Lewis and Clark trail, the mighty Empire Builder takes you on an exciting adventure through majestic wilderness, following the footsteps of early pioneers.” (https://www.amtrak.com/empire-builder-train )

Seats face the sides of the train in the lounge car, so you can sit and watch the world go by, mile after mile, town after town, one landscape morphing into the next. Chicago blurs quickly into the suburbs, then suddenly you’re in the midst of rural towns and dairy farms. For a while it’s agriculture surrounded by more agriculture, bordered by another small section of agriculture. The corn and soybean crops give way to the lakes of Minnesota, then wide open fields go on for miles and miles. I’m not entirely sure what I missed while I was sleeping, but I suspect that it was spacious skies and amber waves of grain, purple mountains and fruited plains. I’m halfway into 28 hours on the train.

The 3 kids in the seats in front of me have it made, with plush pillows and their special blankets, video games, chapter books, Cheese-its and fire hot Cheetos. In the window seat across the aisle, the Teenage Mutant Ninja Turtles suitcase and Veggie Tales blanket seem a little youthful for the 12-year-old who claims them. He hardly acknowledges his Dad, who makes occasional comments about the beauty of the landscape. The preteen stares intently into his Samsung tablet, with earphones drowning out the sound of the train.

The “Golden Hour” comes around 7 pm, for photographers on the train. Its soft, rich light and quickly moving shadows, inspire intense concentration. There’s a new scene to capture about every 3 seconds, if you are fast enough to adjust the settings on your camera. There is a certain romance in the light, a warmth, which causes a soothing feeling that makes it seem as though things will turn out alright. The motion of the train rocks travelers back and forth, in a steady rhythm, and it’s surprisingly quiet, for the number of people in the train car. Passengers are reading, taking naps, and idly surfing the internet. I notice more than one has pulled out their copy of the train schedule, anticipating the upcoming stops.

I’m no historian of the American railroad, nor did I build model train sets in my childhood days, but my father worked 20 years for Quaker Oats, as the International Export Manager. I somehow absorbed talk of shipping containers, which travel full of oats and Captain Crunch by train, truck and ship. I worked as an office temp one summer, making shipping estimates for Hogue Lines. Union Pacific and Burlington Northern were always present at the Quaker Oats Christmas parties. They passed out loud, wooden whistles, toy trains, and paper conductor hats, with bold stripes. It was a quick trip on the Metra line for my Dad to commute to work in downtown Chicago every day. We visited his office on occasion, making our way downtown on an afternoon train. This early exposure to the railways certainly played a part in my interest in a cross-country train trip. 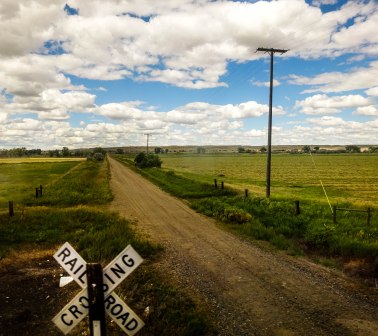 Several months ago I’d been alarmed by a statistic quoted in “The Best American Travel Writing – 2015” edited by actor Andrew McCarthy, a frequent traveler and writer himself. “Only 2 percent of Americans say they’ve ever set foot on an Amtrak train, and only 3 percent of American workers commute by local train.” (P. 40) This was unexpected, and took me a little off guard. I wondered if I would have been among the 98% to never travel by train, if I hadn’t grown up in Chicago. All my life I’ve had access to a town with a sophisticated rail system, connected to another – Milwaukee – which I eventually traveled to by train, as a regular commute, to and from my college dorm.

I travel with my eyes wide open to the sights the railroad brings; some sights are as familiar as vast Midwestern fields of corn and graffiti sprayed on tightly packed brick buildings, in the city. Other sights are fresh and new, for a lifelong Midwesterner. Mountains rise on the horizon, formidable even at a distance. Winding paths, fast-moving streams and the deep green of pine trees surrounds the train, as we ease into the Pacific Northwest. 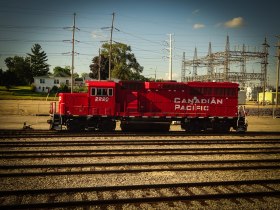 Dinner is by reservation on this train, with three seating opportunities. Don’t show up early – there won’t be room in the dining car, and the conductor will not allow passengers to congregate. I was pleased there were vegetarian / vegan options, and my Black Bean – Vegetable Enchiladas were tasty, even though everything is precooked and reheated. A glass of wine was served, as I sat at a small booth, across from strangers, with the conductor once again inviting diners to “make friends”.

It wasn’t the dining car experience I’d imagined, the stuff of old movies and luxury travel. . . but the service was entertaining. Our server wore a “Fun Meter”, with an indicator that could move from red to yellow, to green. It was maxed out! Service on the train was good overall; the lady running the snack counter (which is also where the beer and wine are) appreciated that we took a minute to acknowledge and engage her. She thanked us for our company, and the conversation.

Back in coach, an Amish family of 5 is seated behind us, with a 3 mo. Old, 2 yr & 4 yr old, who didn’t make a peep for hours at a time. Absent were the tablets and video games; the kids were entertained by the landscape, and interaction with their parents. They were dressed in traditional Amish clothing, including the 3 month old, gazing up at her father with big eyes. Travel by train is common in the Amish community, and at some stops large, extended families boarded together. Strangers would stop in the aisle of the train car, to chat, and discover that they have friends or distant relatives in common.

In casual conversation at our stop in Glacier National Park, we met a chatty British couple, Daniel and Claire, who we learned would be on the same West-bound train later that evening. They were spending 6 weeks touring the United States by train, on an Amtrak 45-day pass, visiting many of the National Parks as possible. “Do you mind if we drink?” they asked, as they sat down beside us at a table in the lounge car, pulling bottles from a grocery bag. We’d been there for a while, chatting, and drinking, and thinking about what we’d see in Portland. We’d hoped that they would find us once the boarded the train in Whitefish, MO, about 20 minutes after we boarded in West Glacier.

Falling into easy conversation, we talked about the National Park Centennial, the wide stretches of land we were passing by, the pros and cons of paying extra for a private room, and the challenges of sleeping on the train. They shared their impressions of being “up close” with parts of the world they had never visited before, and asked us about our travels. The conversation turned to American politics, as we swapped our impressions of the political landscape, from within and from abroad. Future travel adventures were hinted at, and I realized that train travel brings people together in a way I’d never experienced on an airplane. There’s something different about the train, in novels, screen plays, music, poetry and the visual arts. It’s romanticized, and train travel offers something more than just a way to get from point A to point B.

The train connects communities, and frees many people from what would otherwise be isolation. I was sorry that part of the trip was coming to an end, as we neared Portland, and then we were Mooned from the side of the tracks! It was a full moon, bright white against the dark green of the local vegetation. The Empire Builder arrives makes its approach at about the same time every day, and I’m certain that this was not the first time it had received such a greeting.

Join me on the next adventure,