Despite the swarm of tap dancers in the hotel lobby, yearning to turn this week’s audition into the dream of a lifetime, it was questionable whether the “Next Big Thing” was going to come out of Memphis that night. The young dancers were competing to be picked up by one of the dance companies holding callbacks. Their nervous energy was a bit more than I wanted to be around, so I decided to wander around a bit.

The hotel wasn’t exactly within safe walking distance of Beale St., according to locals, but I set out on foot. I’m a relatively savvy traveler, and was spending the night in a mostly tourist area in downtown. I’ve been to this city before, so I know my way around (yeah, right!) and I studied martial arts for 5 years, so I felt safe enough. . . Okay, really this just means I put any and all cockiness aside, stay on the alert, and only frequent well lit, heavily populated parts of town. 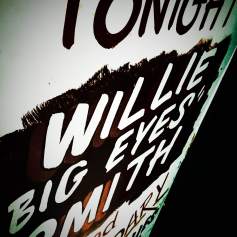 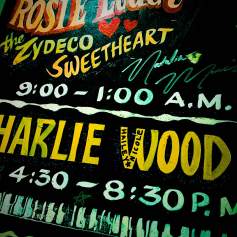 It was a Tuesday in February, which is not exactly high tourist season. I didn’t expect much of a crowd, but on Beale St. there is live music on offer 7 days a week. I was reminded by a handful  of bar signs that it’s not just any Tuesday night. It’s Fat Tuesday. . . time to indulge! Memphis is known for its rich music history, and there is no shortage of food and drink. I ended up at the Rum Boogie Café, where the music was calling out to the streets, enticing pedestrians to come in for a song, a drink, and a taste of the deep fried catfish side of Memphis.

When the ATM around the corner wouldn’t accept my bank card, the doorman waved me through anyway. I was instructed by a sign near the door to “eat. drink. boogie. repeat.” This could turn out to be an entertaining Tuesday night on the road.

Jake: Friendly doorman waiving the cover, and slapping an inky stamp on my hand.

Mitch, Keith & Tom: Rowdy table from Boston, pressed up against the stage,  periodically shouting “You are nasty on those drums, man!”

Nathan: Quiet, sulky character in the back corner, dressed in all black, staring darkly into his drink.

Kat: Fiery redhead who won’t stop taking photos around the place, from the balcony, out the window and at her table – that would be me.

Tim: Heavily tattooed waiter who can’t hear a word you say, points vaguely at the food menu, and brings you another round of beer when you ask for the bill . . . sure he didn’t hear you!! 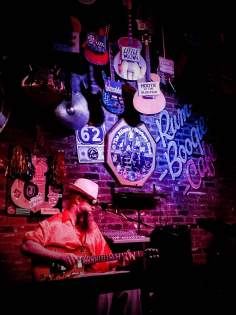 And the other Characters – The Musicians

Sean “Bad” Apple: Eccentric, bearded vocalist, strumming a guitar, wearing dark shades, white fedora, and bright orange suit. The look is actually a little unsettling, because you can’t tell if he’s staring at you with distain, or lost in his soulful music.

The Sticks: Drummer, working his instrument with such passion and enthusiasm that he has to change shirts between sets. Well, that’s the rumor.

Thrown together for the evening, listening to the heavy beat of the drums and the clamor of a cymbal, each of these individuals is almost a caricature. Whether we realize it or not, we are an exaggerated representation of the sort of people who land in Memphis on Fat Tuesday. My perception of them is likely distorted, to the point of having a comedic effect. (Did the heavily accented leader of the Boston pack really just shout out: “You are nasty on those drums, man!”?  Yeah, he did. Did he really think he needed to follow his outburst with the explanation: “That’s a good thing!!”?  Yeah, he did.)

I’m not sure if I come across as the overly enthusiastic, camera-happy tourist, or the wildly creative photo-artist on the verge of trespassing, and definitely invading the personal space of the barflies, just to get the shot she wants. I do refrain from taking a “selfie” on my smartphone, while flashing a thumbs up. So, perhaps the artist / blogger / travel writer is what the others in the bar see. 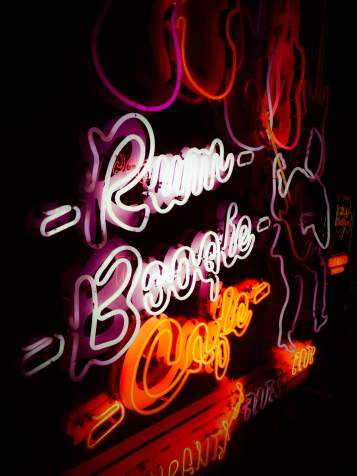 Sean “Bad” Apple is the lead’s real handle. He plays mostly as a solo artist, duo or with his band “The All Night Long Blues Band”,  performing music infused with soul. The music of Memphis is shaped by influences from blues, rock’n’roll, and soul. What better match could there be for the Cajun and bbq menu, with its ribs, catfish, gumbo and beans & rice? His soulful sound bounces off the walls, and this place has personality that just seeps from the walls.

“Through culture and tradition, cotton fields and levee camps, Sean Apple and the All Night Long Blues Band plan to continue to reach back and draw from inspiration of blues past and deliver high energy, driving performances of the blues Future”. (https://www.reverbnation.com/seanbadapple)

The artsy high school kids back at my hotel, the theater and dance kids, would have loved this place, decorated in signed guitars, bits of graffiti, and the colorful promotional posters & hand painted signs advertising the equally colorful acts that have taken the stage over the years. But the doorman was checking IDs. So they will have to wait a few more years to experience the night scene on Beale St.

I’m reminded of the advantages of being an adventurous work traveler, and I’m happy to escape the atmosphere of the hotel for the evening, . . . even if it’s not that easy for a (mostly) vegetarian to find a meal in the pages of the Cajun menu. That’s not a problem – I’ll just enjoy the extra pint the friendly waiter brought me, and tap my foot to another couple of songs before calling it a night.

Come Along for the Next Adventure,