Celestial Los Angeles: The Sun, the Moon & the Stars

Celestial Los Angeles: The Sun, the Moon & the Stars

The Sun: Let the sun shine in!

For a quick weekend getaway I was surrounded by rays of sun that my cheap sunglasses and freckle-prone Irish skin couldn’t combat. But I didn’t mind a bit, in late November, as snow began to fall back home in the Midwest! 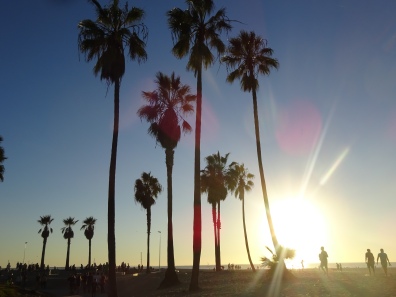 The sun drives people to California, to the beach, and to embrace the lifestyle it supports. In sunny Venice Beach the palm trees along the stretches of sand are mirrored by the medical marijuana shops that line the crowded, T-shirt and cheap souvenir saturated walkway. Street performers work in shifts, or move their show slowly across this tourist area. Skate board life and pick-up basketball games are alive and well!

I slogged through the loose sand to walk along the water, where reflections of the sun were carried back to me by the waves. At least one wave surprised me with its vigor, and I’d likely have sand stuck between my toes for several hours after my departure, but I had to dip my feet in the water. 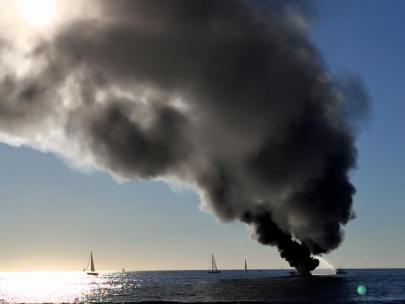 Sadly, a cloud of smoke unexpectedly covered the sun, like a storm rolling in. All eyes were on a speed boat engulfed in flames. No one was injured, as rescue teams worked to protect the passengers, and large hoses pumped ocean water to put out the fire. The delay to my tourism, caused by the spectacle, meant I’d be watching the sunset in Venice Beach. No point getting in LA traffic to make my way across town at that time of day!

Time to pack up and see what the Moon has in store.

When it’s a Public Star Party night, expect traffic at the observatory. But it’s so worth it when upwards of 25 telescopes are set up, for public use. Orion’s Belt, the Seven Sisters (Pleiades) and Pluto were targeted, but the most impressive view of the night sky was focused on the Moon, waxing, just past a ½ moon. Detail you wouldn’t believe, but the Man in the Moon must have been napping that night! If the November chill was too much there was plenty to see and learn about the outdoors inside the conservatory!

After watching Leonard Nemoy’s history of the observatory in the Leonard Nemoy Event Horizon Theater, there were planets to explore! Despite the crowds, it was possible to move about and take everything in. Perhaps I didn’t really need to know how much I weigh on Saturn and Mars and Venus, but it was fun finding out! This is definitely a place to revisit upon my return.

But LA is really most known as a home to the Stars!

LA is known as a place to find fame and fortune, or at least to explore a life in the spotlight! Many flock there with stars in their eyes. Only the best (or is it the most persistent . . . or the most well connected?) will gain the recognition they seek. And then there’s Susan Lucci – I watched her for so many years in my youth, the queen of All My Children! I’m happy to see her as part of the Hollywood Walk of Fame; she certainly has longevity! 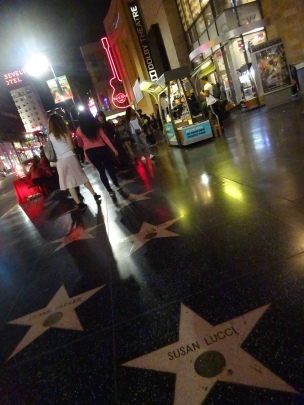 If you don’t find fame, at least you can eat like one of the stars! With dogs named after Martha Stuart, Brando, and Three Dog Night, Pink’s Hotdogs has certainly been visited by the stars!

As a vegetarian, I was pleased to discover a veggie option, and transformed the mushroom Swiss dog, complete with Mayo! I wouldn’t expect anything less in Sunny California!

Ready for the next Adventure!

The Stars at Pink’s: http://www.pinkshollywood.com/starphotos.html